Jessica Alcott, author of EVEN WHEN YOU LIE TO ME, on not writing in order

We're thrilled to have Jessica Alcott join us to share more about her debut novel EVEN WHEN YOU LIE TO ME. 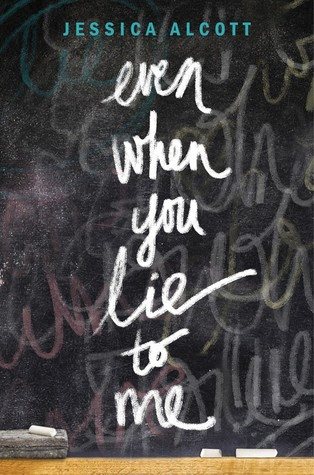 Jessica, what was your inspiration for writing EVEN WHEN YOU LIE TO ME?

I'm really interested in power dynamics and in luminal relationships that push boundaries or have some unusual feature to them; I feel drawn to stories like that. I also got the chance to make fun of Cosmo in print.

Honestly, I find the "connecting" scenes hardest to write – those necessary scenes that push the plot forward but don't otherwise have lots of emotional content to them. I find the "big" scenes relatively easy to write because that's where the meat of the story is; the real challenge is in making the less obviously emotional scenes interesting. My go-to solution is to put in lots of stupid jokes to keep things vaguely interesting.

One of my all-time favorite YA books – really just one of my favorite books full stop – is Judy Blundell's WHAT I SAW AND HOW I LIED. I think it's a beautifully written, profoundly moving book – a coming-of-age story with noir undertones that feels fresh and honest and searingly intelligent. It definitely has some similar themes to EWYLTM but if you'd rather read that one, man, I wouldn't blame you.

How long did you work on EVEN WHEN YOU LIE TO ME?

At least two or three years, I think, for the initial draft, and then maybe another year doing major revisions. When I started writing I was so arrogant, thinking that I could write something great without needing to revise it, but I soon learned that was, to put it lightly, not the case. RIP Poochie.

I feel like I learned how to write a book in the process of writing it. I wrote a lot when I was younger, but I took a long break (fortunately for the world), and I had to figure out the basic process of putting a story together as I was going along. It was an exciting and also incredibly daunting thing to learn.

What do you hope readers will take away from EVEN WHEN YOU LIE TO ME?

As they say, books belong to their readers, so it's not really for me to say what I want people to take away from it. I will say that I've loved having other people read it closely and hearing what they got from it – I always find it delightful when people find meaning in it that I didn't even consciously intend. Oh, I do have one thing I hope people get: a renewed appreciation for Weird Al.

I wrote a lot of this book on my phone on the tube to work. Or rather, I did a lot of rereading and editing on my commute, because I sometimes felt too self-conscious to write with someone's butt right next to my face. I mostly wrote whenever I had free time: nights and weekends and sometimes lunch breaks. I am not one of those people who can get up at 6 and write for an hour. I consider it a good day if I think of one decent joke.

Most of this stuff has been thoroughly covered by people smarter than I am (I will advise you, as everyone else does, to read Stephen King's ON WRITING), but one thing that helped me: You don't have to write the whole thing in order. I often found that I wanted to write the most interesting scenes first, and I'd get bored and impatient having to write other scenes while wanting to write those because I felt like I "had" to. But you don't have to! Go ahead and write those scenes! It won't be bad for the book, and you'll have your anchors that you can then write around. It may present a few more logistical problems, but it'll give you the momentum you need to keep going and get the damn thing finished, which is the most important thing of all.

Fans of John Green's Looking for Alaska as well as Lauren Oliver and Sarah Dessen will embrace this provocative debut novel, an exploration of taboo love set against the backdrop of a suburban high school.

But everything changes when she meets her new English teacher. Mr. Drummond is smart. Irreverent. Funny. Hot. Everyone loves him. And Charlie thinks he’s the only one who gets her.

She also thinks she might not be the only one with a crush.

In this stunning debut, Jessica Alcott explores relationships—and their boundaries—in a way that is both searingly honest and sympathetic.

Jessica Alcott lives with her husband and their two cats. She graduated from Bennington College and has worked as a children's publisher in the UK.

Even When You Lie to Me is her first novel.

What did you think of our interview with Jessica Alcott, author of EVEN WHEN YOU LIE TO ME? Let us know in the comments!