Catherine Linka, author of A GIRL UNDONE, on creating tension


A GIRL UNDONE is the sequel to A GIRL CALLED FEARLESS, and we're thrilled to have Catherine Linka here to tell us more about it.

Catherine, what was your inspiration for writing A GIRL UNDONE?

The publishing contract for A Girl Called Fearless required me to write a sequel which totally freaked me out. Avie begins AGCF by saying that she’s not fearless but she loves that her friend Yates thinks she is, and she ends the book by declaring “I am fearless.” So I could not figure out what the hell her character arc would be for A GIRL UNDONE.

But then, in a weird, serendipitous way, I got a last-minute chance to go to a retreat with The Plot Whisperer, Martha Alderson. Midway through the retreat, I knew what Avie’s character arc had to be. In AGCF, she learns she has the strength to survive, but in A GIRL UNDONE, she would discover that living with yourself may mean sacrificing yourself for others.


How long did you work on A GIRL UNDONE?

Most publishing contracts set a deadline of one year between book 1 and book 2. It was tough, because A GIRL UNDONE was 90k words, and I’m a slow writer. The biggest challenge was redeeming a major character who was repellent in AGCF. (Argh! If only I’d known I was going to bring this character back!!!) I wanted to show Avie pushing him to examine and change his behavior, and her becoming more mature by doing it. My editor had me do two rewrites, but reviewers have said his transformation is believable which thrills me.

I was concerned about creating tension, because Avie goes from being on the run to getting caught. If your character isn’t being chased through the landscape at a breakneck pace, you have to find other ways to to create tension. So I concentrated on tightening the noose. I had to show that being caught is not the worst thing that can happen to her, that the danger to her and her captors is actually worsening.

What do you hope readers will take away from A GIRL UNDONE?

That your convictions will give you strength. Believing in something greater than yourself can give you the power to face the worst. 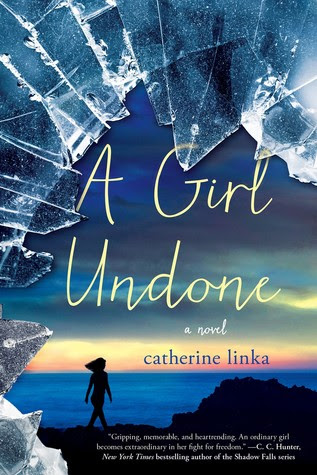 Catherine Linka was almost thrown out of boarding school for being “too verbal.” Fortunately, she learned to channel her outspokenness and creative energy into writing. A passionate traveler she loves to visit wild landscapes like Iceland, the Amazon, and the Arctic circle. Catherine has seen 6 types of whales in the wild, and lived her lifelong dream in January when she stood on deck in pajamas and a parka watching a pod of thirty orca in Antarctica's Gerlach Straits. She doesn’t believe in fate, but she did fall in love with her husband on their first date when he laced up her boots, because she had a broken hand.

What did you think of our interview with Catherine Linka? Have you read A GIRL CALLED FEARLESS or A GIRL UNDONE? Let us know in the comments!