We're honoured today to present the exclusive cover of BANISHED, the second book in the FORBIDDEN trilogy by Kimberley Griffiths Little!

But the trek to Sariba is fraught with heartache and danger. After narrowly escaping being stoned to death for a crime she didn’t commit, and learning that her sister has disappeared, Jayden’s only solace is her love for Kadesh. But even he is keeping secrets from her . . . secrets that will change everything.

This gorgeous and enchanting sequel to Forbidden, is full of love, danger, and heated passion that will leave readers breathless. 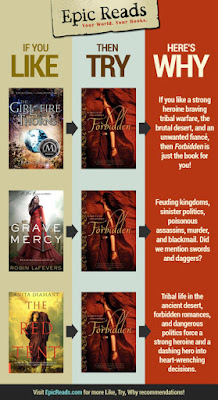 SCHOOL LIBRARY JOURNAL: “A fast-paced, entertaining choice which will appeal to fans of historical fiction and romance.”

BULLETIN OF THE CENTER FOR CHILDREN’S BOOKS: “Rich historical details are deftly woven into Jayden’s narration, and the dynamics of Jayden’s tribe are vividly drawn. Jayden’s story becomes as much about finding herself as it is about finding love.”

"The beauty of the desert of ancient Mesopotamia comes to life in Forbidden . . .Your heart will break as you root for Jayden to triumph over the struggles that tear her world apart, and the ending will leave you thirsting for more!"
--Sara B. Larson, author of Defy

Kimberley Griffiths Little grew up in San Francisco, but now lives in an adobe house on the banks of the Rio Grande with her chaotic, messy family. She’s drunk so much Land of Enchantment water that some of that ancient magic got into her blood and now spurts out her pencil—um, ergonomic keyboard.

Kimberley has slept in the haunted tower room at Borthwick Castle in Scotland, sailed the Seine in Paris, walked the beaches of Normandy, ridden a camel in Petra, shopped the Grand Bazaar in Istanbul, and spent the night in an old Communist hotel in Bulgaria.

The official book trailer is compelling. How did you go about making it?


Fun story: I’ve created book trailers for my MG novels, too, and I love writing the script and planning out the shots and locations. For FORBIDDEN I wanted it to truly look like an actual movie. I hired a young man I’ve known since he was young who got his film degree from Columbia in New York. 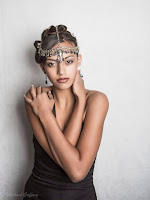 After we discussed the script we decided to focus on Jayden and not clutter the trailer with too many shots or stills. The entire trailer is live action. Justin found a location in southern Utah called Little Sahara Sand Dunes that looks VERY much like the country of Jordan and its mountains (where Jayden and Kadesh’s first romantic declarations occur).

Justin met Sela, the actress, on the set of another film. Sela is actually Tongan, but looks just like the Bedouin girls I met in the ancient city of Petra, beautiful and exotic. (She’s also 5’11” tall and is in the midst of call-backs for Disney’s new princess, Moana.) Sela’s mother is a makeup artist and in one afternoon they did all the shooting. Justin and I spent about 2-3 weeks choosing the footage and editing. I planned out the opening titles and credits and sent Justin the graphics and fonts he needed. The end result is gorgeous and interestingly enough the book trailer fits for BANISHED in many ways, too. 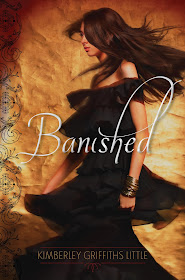 Giveaways (US Only):
One grand prize winner:

EVERYBODY WHO Orders or Pre-orders copies of the books receives a set of gorgeous BOOK CLUB CARDS and an autographed book plate!
a Rafflecopter giveaway


And don't forget to check out the rest of the tour for more exclusive content!

What did you think of the cover of BANISHED by Kimberely Griffiths Little? Let us know in the comments!