April Henry, author of BLOOD WILL TELL, on tenacity being as important as talent

BLOOD WILL TELL is the second book in the Point Last Seen mystery series, and we're thrilled to have author April Henry here to chat writing with us.

I work on a Lifespan treadmill desk.  I love it so much!  I’ve lost over 15 pounds without dieting.  I use the program called Freedom to lock me off the Internet for 45 to 60 minutes at a time, and then I listen to music with the volume turned low.

Tenacity is as important as talent.  Years ago, I took a writing class with two writers, Tom and Jane, who were far better than I was.  Our teacher even recommended Tom to his agent.  Both got a few rejections though, and stopped writing.  I never stopped.  I kept writing and kept trying to be a better writer, and now I’m publishing my 18th book.

I’ll be getting edits soon for The Girl I Used to Be, which is a mystery about a girl who tries to figure out who murdered her parents but didn’t kill her when she was three.  And I’ve just started writing the sequel to Girl, Stolen. 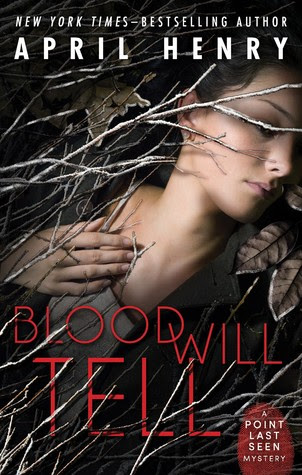 When a woman's body is found in a Portland park, suspicion falls on an awkward kid who lives only a few blocks away, a teen who collects knives, loves first-person shooter video games, and obsessively doodles violent scenes in his school notebooks. Nick Walker goes from being a member of Portland's Search and Rescue team to the prime suspect in a murder, his very interest in SAR seen as proof of his fascination with violence. How is this even possible? And can Alexis and Ruby find a way to help clear Nick's name before it's too late?

New York Times-bestselling author April Henry knows how to kill you in a two-dozen different ways. She makes up for a peaceful childhood in an intact home by killing off fictional characters. There was one detour on April's path to destruction: when she was 12 she sent a short story about a six-foot tall frog who loved peanut butter to noted children's author Roald Dahl. He liked it so much he arranged to have it published in an international children's magazine. By the time she was in her 30s, April had started writing about hit men, kidnappers, and drug dealers. She has published 19 mysteries and thrillers for teens and adults, with more under contract.

What did you think of our interview with April Henry, author of BLOOD WILL TELL? Let us know in the comments!