Anna Schumacher, author of CHILDREN OF THE EARTH, on reading books on screenwriting

We're delighted to have Anna Schumacher here to share more about CHILDREN OF THE EARTH, book two of her End Times series.

Anna, what is your favorite thing about CHILDREN OF THE EARTH?

My title says it all! CHILDREN OF THE EARTH is named after thirteen siblings who were all conceived on the same night and born on a commune called The Children of the Earth, which disbanded when they were all very young. Only Luna, their leader, has any real knowledge of their past.

In this book, the second in the END TIMES series, all thirteen siblings find themselves powerfully drawn to Carbon County, Wyoming. There, they discover powers within themselves that are amplified by the group, and begin enacting a series of rituals to awaken their gods.

I love a good cult, and my favorite stories are those in which disparate personalities come together to create a group more monstrous than the sum of their parts. I loved introducing these new characters to the page and watching them interact with each other while creating chaos and sowing discord.

What was your inspiration for writing CHILDREN OF THE EARTH?

CHILDREN OF THE EARTH is the sequel to END TIMES, which was inspired by the confluence of a newspaper article about oil boomtowns and a longstanding desire to write an epic saga of good vs. evil. I left a lot of knots untied at the conclusion of END TIMES, and CHILDREN OF THE EARTH picks up where it leaves off. I also drew a lot of thematic inspiration from the news: it seems like every day there’s a new story about people doing really crazy things in the name of belief, and I wanted to show elements of the global story within the microcosm of Carbon County, Wyoming.

I had to re-write the climax three times. At first I was trying to cram too much in: I even had a zombie unicorn! Now it’s much tighter, but I can’t give too much away without spoilers.

I’m really happy with the ending now, but my favorite scenes are the ones in which Luna and the Children of the Earth conduct rituals to communicate with their gods. These scenes just hit so many of my buttons: cults, belief, music, ritual, altered states, the supernatural, and lots of tension and action. If I could have made the entire book a series of rituals, I might have.

STRUCK, by Jennifer Bosworth, is a wonderful end-of-days scenario with many spooky, supernatural layers, set in post-earthquake Los Angeles. I read it right as I was beginning CHILDREN OF THE EARTH, and it may or may not have influenced some of the plotting.

How long did you work on CHILDREN OF THE EARTH?

I spent three months outlining, then about six on the first draft, then about three going back and forth with my editor on revisions: so about a year in total. The hardest part for me, though, is waiting for the book to come out in print after my final revision. I’m a bit of a perfectionist and not very patient, so knowing I can’t see it yet but I’m not allowed to tinker with it anymore drives me bananas.

Before I wrote CHILDREN OF THE EARTH, I did a lot of research into rites and rituals: what goes into making them, which elements to include, and how to use them to create magic and effect change. I was studying it for fictional purposes, so I’d have material to incorporate into Luna’s rituals, but after doing a lot of reading I found myself looking for ways to add ritual into my own life (in a much saner way than Luna and her siblings).

What do you hope readers will take away from CHILDREN OF THE EARTH?

If there’s a lesson in this book, it’s about what happens when people get too swept away by their own dogma. Religious fervor is causing a lot of hatred, destruction, and death in the world right now; I hope people who read this book will remember to take charismatic leaders with a grain of salt, and to always ask a lot of questions.

I have five novels sitting in a drawer. One came very close to being published, a couple were politely but immediately rejected, and some never saw the light of day. I spent a decade trying to get published before I had success with END TIMES – it’s given me plenty of time to grow a thick skin.

I’m in a writing group with some wonderful, talented women. At one point I thought I had part of a novel that was very close to being ready to show my agent. I had a great theme, great characters, and a really cool environment, and I felt like my prose really sparkled.

My fellow writers had to sit me down and very, very gently explain to me the fundamentals of structure and plot. They had me read books on screenwriting and restructure my whole book. It was difficult and humiliating (I have an MFA! I should know this stuff!), but at the end I had a novel that made a lot more sense and was way more engaging to read.

I do my best plotting and character development on the subway, my best writing at home on Saturday nights, and my best revisions under crazy deadlines. Since I also have a fulltime career as an advertising copywriter I have to grab writing time whenever and wherever I can: at home, at work, on the train, on vacation. I prefer silence, but if I’m somewhere loud I’ll put on headphones and turn on boring, repetitive tech-house music. I don’t know how people dance to it, but it sure is great for writing.

Don’t put a single word to paper until you know what each of your characters wants, which obstacles will stand in their way, and how they’ll have evolved by the end of the book. You wouldn’t build a house without a blueprint, so don’t start a novel without an outline: it will only end in endless re-writes and tears.

I have a few different projects in the hopper: a YA contemporary, a stand-alone paranormal thriller, and of course a whole bunch of ideas for the next installment in the END TIMES series! 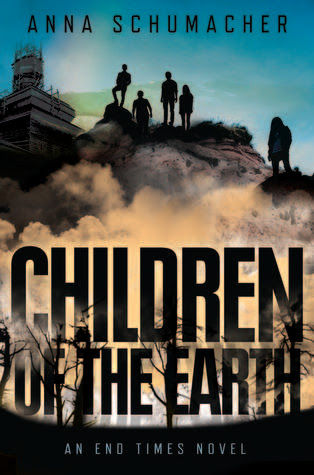 Seven signs warned them. Now it’s time for Carbon County to fight back.

In End Times, Daphne lost herself in love with Owen, only to discover the dark secret that puts Carbon County at ground zero for the end of days. . . .

All thirteen of the Children of Earth have arrived and taken root in town. Together at last, they can perform the series of rituals necessary to awaken their father, a wrathful entity known as the God of the Earth.

Daphne protects their identities from Pastor Ted and the God-fearing locals out of love and allegiance to Owen. But when people start disappearing from town and Daphne begins receiving visions from God, her allegiance—and even her love—is brought into question in this astonishing companion novel to End Times.

Anna Schumacher received an MFA in fiction writing from The New School. Born and raised in the tiny town of Guilford, VT (no traffic lights, no post office, one store), she now lives in Brooklyn, NY with her husband and two cats. END TIMES is her first work, but she hopes to publish many more.

What did you think of our interview with Anna Scumacher, author of CHILDREN OF THE EARTH? Let us know in the comments!