Andrew Karre, Executive Editor of Dutton Books for Young Readers on What's Important in a Manuscript

Today I have a special treat for you! Andrew Karre is an amazing editor (just look at his credits below) and has the kind of wry sense of humor that I love. This succinct and fun interview gives a glimpse into the mind of the ever elusive editor: 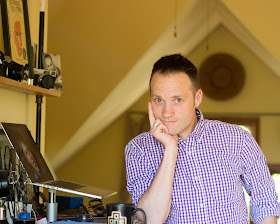 In 2005, Andrew Karre helped launch the YA imprint Flux. He was an editorial director at Lerner Publishing Group from 2008 through 2014, overseeing Carolrhoda Books and founding Carolrhoda Lab. He has published first novels by such noted authors as Maggie Stiefvater, A.S. King, Vaunda Micheaux Nelson, Blythe Woolston, Carrie Mesrobian, and E.K. Johnston. In 2015, he joined Dutton Books for Young Readers as executive editor, focusing on YA and MG, fiction and nonfiction. He works from his home in St. Paul, Minnesota. Follow him on Twitter at @andrewkarre.

1. How did you decide to become an editor?
I had a summer internship in college in the home arts department of a publishing house. I spent the summer working mostly on books about entertaining, drapery, and sewing. I loved it—not so much the content, but the process of making the books. I never considered any other career else seriously after that summer.
2. What is the biggest difference between an agent and an editor?
There are lots of different ways to be each, but I think the primary difference between the roles is that a good agent is accountable to his client and his job is to bring a manuscript to a market of editors, whereas an editor is accountable to his publishing house and his job is to bring a book to a market of readers. Both need skill in shaping manuscripts, but the final outcomes are very different.
In my conception, an agent is very good at taking a manuscript to a state where several editors will be able able to see potential for an exciting final form—and each of those forms may be quite different. When I edit, though, my goal is to bring the book a final state that feels inevitable and as though it never could have been another way.
3. What have you seen too much of? Not enough of?
I see far too much teenage wish fulfillment—teenagers imagined as adults would like them to be. I read far too little of teenagers as the grand, glorious, andunlikable train wrecks they so often are.
4. How important are trends when considering work?
Trends are just as important to me in considering manuscripts as is the airspeed velocity of an unladen swallow.
5. What is more important: character, plot, or world?
Character.
6. Literary or commercial?
Good.
7. What book do you wish you’d edited?
A Clockwork Orange
8. What’s your favorite part of being an editor?
Talking with authors about their manuscripts.
9. Coffee, tea, chocolate — what’s your vice?
Coffee
10. What would you like aspiring writers to know about the publication process?
It’s a process that requires patience and discipline, but it is also one that can be creatively fulfilling. It may not be perfect every time, but I hope every author has an experience of publishing at its best.
11. How many manuscripts come across your desk via agents and what percentage of those do you acquire?
A great many and a tiny few.
Lisa Gail Green at 6:00 AM