Katelyn Detweiler, author of IMMACULATE, on writing because it’s a story that refuses to stop whispering in your ear

We're thrilled to have Katelyn Detweiler join us to share more about her debut novel IMMACULATE.

Katelyn, what was your inspiration for writing IMMACULATE?

I am (and always have been) a big fan of hypothetical questions. It entertains my brain to no end to put ridiculous situations to people and make them puzzle through totally preposterous scenarios. For example, would you rather only be able to eat mushrooms every day for the rest of your life, or never find true love? (I mean, REALLY, what would you do???) So one day, way back when I was still in high school, my mom and I were on a car ride, and I asked her: “Would you believe me if I said that I was a pregnant virgin?” She considered the question (she’s a good sport like that!) and then she actually said yes. She said YES. And I actually believed that it was true, that she would put aside her questions and doubts and just choose me and my word.

That idea sat for a while, forgotten in a dark corner of my brain but still clearly marinating, until a few years ago, when I suddenly remembered it and thought—how is there NOT already a book about this? With all the other retellings and re-imaginings of “classic” stories, why not this one? I started putting notes to paper that very same day.

I have no ability to outline—I write as I go—so the opening was the hardest part by far. I knew I wanted to create a sort of modern new twist on the “Annunciation” story, creating the very specific moment in time where Mina’s pregnancy begins. I had a sense of the setting going in, and of Mina’s personality and background, but other than that, I came to the scene blind. As for the scenes I’m proudest of / love the most, I think those come more towards the end—some of the big emotional moments as Mina gets closer and closer to the end of the pregnancy. But I can’t talk about those scenes without spoiling things a bit!

There are the fabulous twists of reality in Lauren Oliver’s BEFORE I FALL, Gayle Foreman’s IF I STAY, David Levithan’s EVERY DAY. Like IMMACULATE, contemporary with that added “what if” element. And as with those books as well, the twists here aren’t the whole story; IMMACULATE is primarily about relationships—friends, family, love. And the relationship you have with yourself first and foremost. These are themes that play out in so many of the contemporary YA novels I’ve loved through the years.

How long did you work on IMMACULATE?

The first rough draft took me about eight or nine months to get down on paper. After that, I didn’t look at it for almost six months, then dove back in with new perspective and spent another few months revising. My agent read and sent it out to editors soon after, so the initial writing process took just under a year and a half from start to finish.

It made me realize how much I care about the details—how much about my own world / thoughts / feelings I verbalize to the people in my life. Sometimes this is a great thing. Sometimes this is an annoying thing. It definitely took some cutting back in order to hone in on the most important ideas here, but I think it’s also key in really giving shape to Mina’s world and allowing readers into her experience and thought process throughout.

What do you hope readers will take away from IMMACULATE?

I hope that readers leave IMMACULATE just a little bit more open to the idea of believing in something that can’t be explained. Faith in someone or something despite proof. Believing in a friend even when it’s hard, believing in a feeling even when there’s no cause or rationale. I want readers to think more in the gray—in between the black and white science and logic that drives our everyday perception of the world.

IMMACULATE is my first book. I wrote a few short stories in college and started a novel for a writing class through Gotham Writers’ Workshop, but none of those were projects I felt compelled to push further and really explore. IMMACULATE was the first idea that I cared about enough to actually try. I wrote because I had this idea that I couldn’t stop thinking about—not because I considered myself to be a writer, really. The fact that I work at a literary agency certainly made the process easier in terms of getting to the point of selling it to a publisher, and it also made me my own toughest critic throughout writing and revising. I was self-editing constantly as I wrote, and really thinking about what would make this book stand out from others based on a more practical business perspective. I feel wildly fortunate to have that dual agent/author mindset, because I think that many of the skills go hand in hand and push me to be better at both jobs.

Not at all. And I hope it stays that way—I hope I’m ten novels in and still searching for that key.

On weekends when I’m lucky enough to have the whole day free (versus the usual, squeezing in an hour or two after work on a weekday), I always do some yoga first—I swear by headstands, they’re almost as useful as coffee to get my brain fired up in the morning. And no matter what season, how hot or cold it is in my apartment, I need a hood up or a hat on while I write. There’s something about covering my head that just works, even if it’s totally mental. So: yoga, cap… and silence. I have a white noise machine that is my best friend on writing days.

Don’t give up. Ever. No matter how many takes, tries, novels in the drawer there are. And don’t force stories and projects that aren’t clicking; write because you’re totally and completely passionate about your idea.  Write because it’s a story that refuses to stop whispering in your ear, all day, all night.

I’m working on the follow-up novel to IMMACULATE—more of a companion than a direct sequel. It’s set about seventeen years after IMMACULATE ends, when Mina’s baby is now a teenager living in New York City. A teenager who has absolutely no idea about what happened in the past—no idea what his / her mother went through. But he’s / she’s about to find out everything, and life gets quite interesting from there. 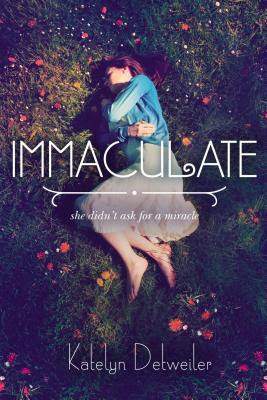 Mina is seventeen. A virgin. And pregnant.

Mina is top of her class, girlfriend to the most ambitious guy in school, able to reason and study her way through anything. But when she suddenly finds herself pregnant—despite having never had sex—her orderly world collapses. Almost nobody believes Mina’s claims of virginity. Her father assumes that her boyfriend is responsible; her boyfriend believes she must have cheated on him. As news of Mina’s story spreads, there are those who brand her a liar. There are those who brand her a heretic. And there are those who believe that miracles are possible—and that Mina’s unborn child could be the greatest miracle of all.

Katelyn Detweiler was born and raised in a small town in eastern Pennsylvania, living in a centuries-old farmhouse surrounded by fields and woods. She spent the vast majority of childhood with her nose in a book or creating make-believe worlds with friends, daydreaming about how she could turn those interests into an actual paying career. After graduating from Penn State University with a B.A. in English Literature, emphasis in Creative Writing and Women’s Studies, she packed her bags and made the move to New York City, determined to break into the world of publishing. She worked for two years in the marketing department of Macmillan Children’s Group before moving in 2010 to the agency side of the business at Jill Grinberg Literary, where she is currently a literary agent representing books for all ages and across all genres.

Katelyn lives, works, and writes in Brooklyn, playing with words all day, every day, her dream come true. When she’s not reading or writing, Katelyn enjoys yoga, fancy cocktails, and road trips. She frequently treks back to her hometown in Pennsylvania, a lovely green escape from life in the city, and her favorite place to write.

What did you think of our interview with Katelyn Detweiler, author of IMMACULATE? Let us know in the comments!