THE MESSENGERS is the latest thriller from Edward Hogan, and we're pleased he could join us to talk about writing.

Edward, what book or books would most resonate with readers who love your book--or visa versa?

Well, I can only tell you what other YA books I love - and hope that they've influenced me, somehow!  I'm a massive fan of Patty Dann's classic Mermaids.  It's so funny and well-observed - sometimes a book just feels true.  If you're into British writing, David Almond (Kit's Wilderness) and Mal Peet (Life: An Exploded Diagram) are amazing.  I loved Rebecca Stead's When You Reach Me.  In terms of non-YA books (is the term "A"?), I think Miriam Toews (A Complicated Kindness, The Flying Troutmans) is the best writer of teenager characters that I've ever read.  Her books are moving, hilarious and real.

I try to do something different with every book I write.  I'm still learning, still making mistakes, but that's part of the fun!  The Messengers is the first book I wrote with a big, complicated central idea (Frances has intrusive visions of future deaths).  It was really hard to do, and I was lucky to get help off some brilliant editors.  I also wrote it while bringing up two small babies - so I learned a lot about writing with two hours sleep (and a heart full of love!)

It's hard for me to give advice -  I'm not exactly a bestseller!  I know there are writers out there who haven't been published who are my equals or beyond.  I recently heard a very beautiful little lecture from the writer, Elizabeth Gilbert.  The gist of it was that you can't be an inspired genius all the time.  The trick is to "keep showing up" at your desk.  I'm also learning about the importance of cutting oneself off from ideas like 'success' and 'popularity'.  As Allen Ginsberg said, "To gain your own voice, you have to forget about having it heard." 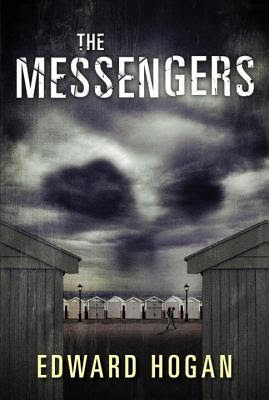 If you could see the future, would you have the guts to change it? A new psychological thriller from the author of Daylight Saving.

Fifteen-year-old Frances is sent to her aunt’s house for the summer to escape difficulties at home. Soon she meets Peter, a man unlike anyone she has ever known. Peter is a messenger—but his messages never bring good news. Peter believes that Frances is a messenger, too. In a compelling page-turner as complex as it is chilling, the author of Daylight Saving poses the provocative question: If you could change the future, where would you start?

Edward Hogan’s first adult novel, Blackmoor, was short-listed for the London Sunday Times Young Writer of the Year Award and the Dylan Thomas prize. Daylight Saving is his first young adult novel. He lives in the U.K.

What did you think of our interview with Edward Hogan, author of THE MESSENGERS? Let us know in the comments!