What book or books would most resonate with readers who love FIG—or vice versa?

I will speak to the books that inspired Fig, Harper Lee’s To Kill a Mockingbird has been my favorite book since I was fifteen, but I also fell in love with coming-of-age stories such as the following: Bastard Out of Carolina by Dorothy Allison, The House on Mango Street by Sandra Cisneros, Cruddy by Lynda Barry, Push by Sapphire, I Capture the Castle by Dodie Smith, Winter’s Bone by Daniel Woodrell, The Perks of Being a Wallflower by Stephen Chbosky, and Cutby Patricia McCormick. I like books that address difficult subjects.

I studied Selah Saterstrom’s, The Pink Institution, and how she handled family trauma while The Hour of the Star by Clarice Lispector influenced the ending of Fig. Chuck Palahniuk’s Fight Club helped me write the rule making that Fig does. The Wonderful Wizard of Oz by L. Frank Baum also played an important role in the creation of Fig, as did “Little Red Riding Hood,” “Cinderella,” and “Snow White.” Furthermore, I worship at the altar of Angela Carter, and her collection of re-imagined fairy tales, The Bloody Chamber. What I read in an undergraduate Women’s Lit class comes through in Fig via Mama’s literary tastes—work like Frankenstein by Mary Shelley, “The Yellow Wallpaper” by Charlotte Perkins Gilman, “A Room of One’s Own” by Virginia Woolf, and Jane Eyre by Charlotte Bronte.

Anyone who has an affinity for The Book Thief by Markus Zusak will probably enjoy Fig. Like The Book Thief, Fig is not your traditional YA because it’s not just about a teenager. Fig is told over a span of thirteen years, and for over half of the book, she is still a child. It is about Fig just as much as it is about the adults in her family. Finally, Fig would not exist if not for Zilpha Keatley Snyder’s, The Headless Cupid, which I read when I was nine, and where I got the idea for The Calendar of Ordeals which Fig was titled once upon another time.

I write in the morning. I crawl out of bed, brew coffee, and then I go to my office and begin. I don’t change out of my nightgown. While I buy most of my clothes from thrift stores or consignment shops, I get my nightgowns new (and I spend more than I should). I like long white Edwardian-style nightgowns with crocheted details. I used to think I was lazy, but then someone pointed out that by writing right after waking up, and not changing into “day” clothes, I was remaining to some extent in the world of dreams and sleep while I write. That felt so true, I’ve accepted it as fact. Dreams are an important part of my writing process. I dream more of what happens in my stories than not. And when I say “dream,” I mean both waking and sleeping dreams, but I am jumping ahead.

I get wired on coffee and write. If I feel stuck, I go over what I wrote the day before until the rhythm and the writing comes. If I get extra stuck, I leave the computer and go to the dining room to write by hand. I only use Pilot Precise Rolling Ball pens with extra fine tips, black ink, and I only write in moleskin journals. No exceptions.

I built an altar in the corner of my office to the writing of Fig—it served as both inspiration and motivation. As you can see in the photo, it includes everything from books that influenced Fig to actual objects that appear in the story (like the Matryoshka doll). Right now, my desk is cluttered with altar items toward my next book, Roadside Altars as well as necessary stuff like: dictionaries, a thesaurus, baby name books, and good books on writing by writers I admire.

I write (almost) every single day for two-to-six hours. Once I’m done, I take a bath with so much Epsom salt it becomes the sea. Then I soak, relaxing, and waiting for the daydreams to come. While I bathe, I work out what needs to be fixed, or the muse tells me what to write the next day. Then I get out of the tub, put on real clothes and do regular stuff like clean the house, cook, run errands, and hang out with my family. Soon enough, it’s time to get into bed. There, the muse returns, whispering more ideas to me as I drift into sleeping dreams—she primes me for the writing to come when I again awake.

I’m currently working on a manuscript titled, Roadside Altars, about a metal head teenage girl named Krystal Rassat from a trailer park in Sacred Heart, Minnesota. Krystal was born with a strange lump on her left shoulder that she’s always believed to be a mark indicating she has the gift of sight just as her grandmother and mother do (they come from a long line of Louisiana Hoodoo priestesses). However, Krystal learns from a doctor that this lump is actually the remains of a twin sister she absorbed in utero, a syndrome known as Vanishing Twin. Krystal then begins to doubt the family lore, her ability to see what others can’t, and to make matters worse, she starts hearing her dead sister telling her what to do. She runs away from home and each chapter represents a major arcana card from the Tarot. Following the same order as the deck, Krystal’s journey echoes the Fool’s journey through the twenty-two different trumps. Roadside Altars is a road trip book that takes place in the 1990s, and is another coming-of-age story about mental illness (specifically manic depression, survivor’s guilt, and borderline personality disorder), as well as an exploration of family, specifically the bonds between mothers and daughters. 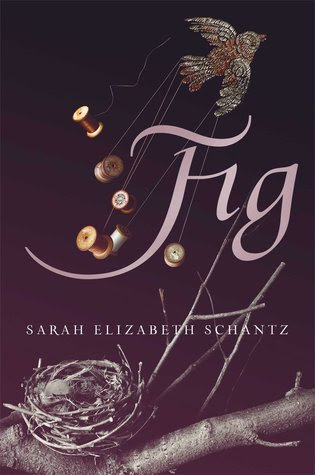 Love and sacrifice intertwine in this brilliant and provocative debut of rare beauty about a girl dealing with her mother’s schizophrenia and her own mental illness.

But as she watches Mama slowly come undone, it becomes hard to tell what is real and what is not, what is fun and what is frightening. To save Mama, Fig begins a fierce battle to bring her back. She knows that her daily sacrifices, like not touching metal one day or avoiding water the next, are the only way to cure Mama.

The problem is that in the process of a daily sacrifice, Fig begins to lose herself as well, increasingly isolating herself from her classmates and engaging in self-destructive behavior that only further sets her apart.

Spanning the course of Fig’s childhood from age six to nineteen, this deeply provocative novel is more than a portrait of a mother, a daughter, and the struggle that comes with all-consuming love. It is an acutely honest and often painful portrayal of life with mental illness and the lengths to which a young woman must go to handle the ordeals—real or imaginary—thrown her way.

Sarah Elizabeth Schantz is a fiction writer living on the outskirts of Boulder, Colorado in an old farmhouse surrounded by open sky, century-old cottonwoods and coyotes.

In 2011, her short story, "The Sound of Crying Sheep" won first place for a fiction contest hosted by Third Coast; Third Coast not only published the story, but they nominated her for the Pushcart Prize, and for best New Stories from the Midwest (she was accepted for inclusion in the upcoming anthology of the latter). Before this particular award, the story was short-listed for contests hosted by both Zoetrope and New Letters. This award, and the attention Schantz received, prompted her to write her first novel which is titled, FIG. Represented by Heather Schroder at Compass Talent, FIG is scheduled to be released Spring of 2015 (McElderry/Simon & Schuster).

FIG is the story of a girl who grows up under the shadow of her schizophrenic mother in rural Kansas. This coming-of-age story tracks Fig from age six to age nineteen--the age she fears she might inherit her mother's disease; Fig employs magical thinking as a means to avoid this fate, but in turn develops OCD. In the end, she must learn to separate her identity from the identity of her beloved mother.

Several excerpts from FIG, have won the following awards: 1. "Plastic Surgery" won first place in the 2012 contest hosted by the feminist press, Saturday's Child. 2. "The Breaking Wheel" was a double-finalist for two literary competitions hosted by Hunger Mountain and is available to read on their website. 3. "Stillborn" was short-listed by a flash fiction contest ran by WOW! Women on Writing, before it won first-place for the fourth annual flash fiction award hosted by Monkey Puzzle Press (also available to read online at their website). 4. "Electric Shock Therapy" was a national finalist for the 2012 contest hosted by Alligator Juniper; the story was later republished by Midwestern Gothic. 5. "Palindromes" was a fiction finalist for Glimmer Train, before it was short-listed by Alligator Juniper and published in their 2013 edition.

Schantz is also working on her second novel, ROADSIDE ALTARS, and the first chapter titled, "Sister" won the Fall 2012 Orlando Prize for Short Fiction hosted by the foundation, A Room of Her Own; the story was published by The Los Angeles Review (Volume 13/ Spring 2013).

ROADSIDE ALTARS is the story of a girl named Krystal. Each chapter is inspired and created to follow each major arcana card in the Tarot. Krystal is a sixteen-year-old metal head from a trailer park in Sacred Heart, MN. She has a lump on her left shoulder containing the remains of her twin who she absorbed before she was born--this is a real syndrome, called "Vanishing Twin." Krystal believes she is haunted by her sister, but she also has been diagnosed with a bipolar and borderline personality disorder. Either way, she is susceptible, and has been the victim of satanic ritual abuse by the time she finally leaves home. On the road, she finds herself. Like her Nana, Krystal can also read the future and tell fortunes.

You can find more of Schantz's work in the following journals and anthologies: Bombay Gin (37:2, 2011), The Adirondack Review, The Smoking Poet, Midwestern Gothic, Hipmama, and the contemporary anthology of fairy tales titled: MODERN GRIMMOIRE.

Schantz is available for readings, and has been featured at the 2012 Small Press Festival in Milwaukee, the 2013 Bouldering Poets Reading Series and the 2013 4x4 Reading. She has a BA in Writing & Literature and a MFA in Writing & Poetics from Naropa University. She collects Lotus slippers, Blue Willow, Edwardian-style nightgowns, fairy tales, Owl figures and antique marbles. She loves to take a long bath so salty it becomes the sea, and every time the moon is full, she takes a long stroll in the silver light.


What did you think of our interview with Sarah Elizabeth Schantz, author of FIG? Let us know in the comments!