Meredith Zeitlin, author of SOPHOMORE YEAR IS GREEK TO ME, on writing what you're excited about

We're delighted to have Meredith Zeitlin with us to share more about her latest novel SOPHOMORE YEAR IS GREEK TO ME.

Meredith, what was your inspiration for writing SOPHOMORE YEAR IS GREEK TO ME?

I had a friend who mentioned that when she was a kid she used to live in Greece with her extended family for months at a time, during the school year. I thought that was such an interesting idea, to be IN school but not at YOUR school. Since the friend was Greek, I figured I’d make my character Greek, too - especially because, with all the recent economic issues in Greece in the last few years, there would be plenty for my character to discover and explore on her journey. I also wanted to continue writing the world I created for my first book (Freshman Year and Other Unnatural Disasters) but through the eyes of a new main character.

I don’t want to give anything away, so this is a hard question to answer… but I will say that the scenes between Zona and her dad were both very enjoyable and very difficult for me to write. My own father died when I was 21, and we were very close when I was growing up. In imagining the character of David Lowell I had to think a lot about details I hadn’t reflected on in a long time, and that was not so easy. There’s a scene at the end of the book where Zona is in a very vulnerable position and truly terrified, and it was painful to put myself through those emotions to get the scene just right. I’m very proud of how it came out in the end.

Another scene I really love is the one in which a boy Zona likes puts an ice cream cone down - ice cream side first - on top of her head. That actually happened to me in college, and it was one of the most absurd moments ever. I have been dying to use it in a book!

How long did you work on SOPHOMORE YEAR IS GREEK TO ME?

Writing a book is a strange and very drawn-out process. I traveled in Greece for three weeks to research the book and craft the story around the people I met and the experiences I had, and I wrote maybe 40 pages while I was there. When I came home I wrote the rest of the book in about three months, and then sent it off to my editor. Every few months after that I’d get notes and do rewrites and send back a new draft. And for the last six months or so, the book has been finished but not actually FINISHED, i.e. printed. So the overall timeline from starting the book to publication was about two years, but the actual time spent writing it is more like five months overall.

What do you hope readers will take away from SOPHOMORE YEAR IS GREEK TO ME?

Excitement about travel. A desire to connect with new people. The knowledge that being brave and being scared aren’t mutually exclusive. All the main characters in this story are wrestling with being true to themselves, despite what other people are asking of them or expecting, and I hope their experiences might be helpful to young readers who are dealing with some of the same issues.

I am a terrible example for other writers and writers-to-be. I have no ritual. I’m the worst procrastinator, and will do almost anything to keep from actually sitting down and getting work done. I don’t even have a desk! I write on my couch or in bed (bad idea, obviously), and for short spurts before I get distracted by something and have to take a break. TV and Facebook are the worst distractions for me, so sometimes I’ll force myself to go to a coffee shop and sit there until I get pages done. I do write scenes in my head, though, often before I fall asleep at night, and then I might get up and finally type them up the next day. (Or a month later.) I find it easier to let ideas flow and develop when I’m drifting off instead of when I’m forcing myself to stare at a computer screen.

When I do listen to music, I usually put on one of my favorite Broadway scores - “Ragtime” and “Once on this Island” are two I always seem to go back to. Then sometimes there will be a magical moment when I realize the music has ended and I’m still working… which means I actually did it: I was a writer for two whole hours! Then I feel exceptionally proud of myself and eat a bunch of candy and refuse to do any work for a week.

Don’t worry about getting a publisher or writing something commercial or any of that stuff - just write. Write anything that you are interested in or excited about - even it’s sappy poems or memories from your childhood or retellings of books you love. You never know what you’ll be able to use someday for a project, and just getting into the habit of writing is the best exercise of all. Now if only I could take my own advice…

I should be working on Junior Year, and I do have thoughts about it. I’m also toying with an idea for something totally different, and not necessarily YA. But no promises! 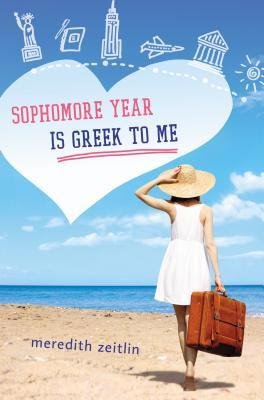 High school sophomore Zona Lowell has lived in New York City her whole life, and plans to follow in the footsteps of her renowned-journalist father. But when he announces they’re moving to Athens for six months so he can work on an important new story, she's devastated— he must have an ulterior motive. See, when Zona's mother married an American, her huge Greek family cut off contact. But Zona never knew her mom, and now she’s supposed to uproot her entire life and meet possibly hostile relatives on their turf? Thanks... but no thanks.

In the vein of Anna and the French Kiss, Zona navigates a series of hilarious escapades, eye-opening revelations, and unexpected reunions in a foreign country—all while documenting the trip through one-of-a-kind commentary.

Meredith Zeitlin has written two books for young people (so far) and lots of articles for Ladygunn Magazine. She is also a voiceover artist who can be heard on commercials, cartoons, and TV shows (if you want to know more about that, go here: www.mzspeaks.com).

She lives with two adorable feline roommates in Brooklyn, NY, and loves talking about herself in the third person. All of which, you have to admit, is pretty rad.

What did you think of our interview with Meredith Zeitlin, author of SOPHOMORE YEAR IS GREEK TO ME? Let us know in the comments!