Kristin Halbrook, author of EVERY LAST PROMISE, on avoiding 'easy' choices for characters

We're pleased to have Kristin Halbrook stop by to share more about her latest novel EVERY LAST PROMISE.

Kristin, tell us about your inspiration for writing EVERY LAST PROMISE.

Every scene in which Kayla didn’t “do” something was a hard scene to write. Because yes, as a human, I wanted her to act, and act quickly. I wanted her to choose the “right” thing, without having to think about it. But as an author who wanted even more to dig deeply into the experiences a person like Kayla might have, I knew “easy” choices didn’t exist. I particularly love the scenes with Kayla and her mom, and I’m particularly proud of the last line of the book (which I won’t spoil, here ☺).

I think readers would also love SPEAK by Laurie Halse Anderson, and ALL THE RAGE by Courtney Summers.

What do you hope readers will take away from EVERY LAST PROMISE?

By the end of the book, I hope readers will think more deeply about what it means to be a hero, what it means to hold onto secrets, and what it means to give those secrets up. I hope they’ll think about how pervasive and widespread rape culture is, and how the effects of it are rippling. And I hope, too, they’ll be more willing to stand up for rape survivors, be good friends, and also grow their empathy for the variety of reasons survivors don’t speak up about their assaults. 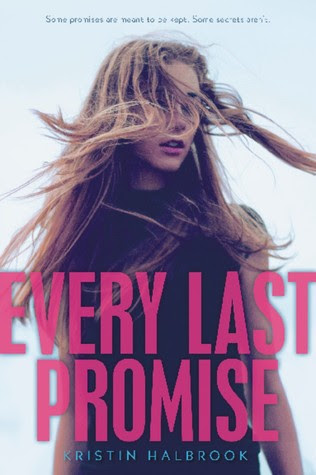 Perfect for fans of Laurie Halse Anderson and Gayle Forman, Every Last Promise is a provocative and emotional novel about a girl who must decide between keeping quiet and speaking up after witnessing a classmate's sexual assault.

Kayla saw something at the party that she wasn't supposed to. But she hasn't told anyone. No one knows the real story about what happened that night--about why Kayla was driving the car that ran into a ditch after the party, about what she saw in the hours leading up to the accident, and about the promise she made to her friend Bean before she left for the summer.

Now Kayla's coming home for her senior year. If Kayla keeps quiet, she might be able to get her old life back. If she tells the truth, she risks losing everything--and everyone--she ever cared about.

When Kristin Halbrook was little, she wanted to be a writer, the President of the USA or the first female NFL quarterback. Despite being able to throw a wicked spiral, she didn't really grow to the size needed for the NFL. Then, as she got older and studied more, she came to realize there were better ways to effect positive change than becoming president. The first one, however, stuck. Even when Kristin was pursuing other dreams, she always took time to write here and there. NOBODY BUT US was published by HarperChildren's in 2013.

When she's not writing or reading (which is what she does all day, in all of my work), she's spending time with pixies, her Mad Scot soulmate, and one grumpy cocker spaniel; traveling across oceans and time; cooking and baking up a storm and watching sunsets and waves crash on the beach. She currently lives, loves and explores in The Emerald City, though she occasionally make wispy, dream-like plans to move to New York, Paris or a Scottish castle one day (if just temporarily). You can reach her at kristinhalbrook@gmail.com.

What did you think of our interview with Kristin Halbrook, author of EVERY LAST PROMISE? Let us know in the comments!