Kieran Scott, author of WHAT WAITS IN THE WOODS, on the pros and cons of writing longhand

WHAT WAITS IN THE WOODS is a thrilling mystery, so we're thrilled to have Kieran Scott here to tell us more about it.

Kieran, what was your inspiration for writing WHAT WAITS IN THE WOODS?

When I was younger I loved all of Lois Duncan's suspense novels. They all had these cool psychological elements and these crazy twists and turns. I was definitely thinking of those reading experiences as I wrote this book.

What scene was particularly hard for you to write and why, and is it the one of which you are the most proud?

I had a hard time writing the scene that comes immediately after this horrible discovery is made. I don't want to give anything away, but it was hard to write because I wanted the reader to really feel the fear and confusion that my main character, Callie, was feeling. I tried so hard to stay in her head, in her body, and to see things as she was seeing them. I hope I pulled it off! The scene I love the most, though, is probably this scene where the characters are wading through this bog and their feet are getting stuck in the mud and they're feeling things swimming around their legs. I just shuddered writing about it!

Lately I've been writing longhand in notebooks, which is how I wrote my very first book. Back then I was commuting into the city, so the only time I really had to write was on the train. I'd write things out longhand, then type them into my computer later when I had a chance (I didn't own a laptop). I would basically edit the scenes as I typed them in, which meant my first draft was really polished. I've been doing that again recently and it seems to be really working! Though I do get a lot of hand cramps. :) 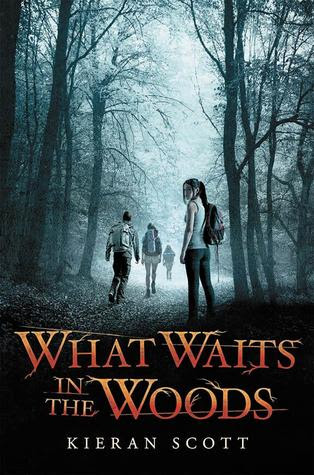 For city girl Callie Velasquez, nothing sounds more terrifying than a night out in the wilderness. But, wanting to bond with her popular new friends, Lissa and Penelope, she agrees to join them on a camping trip. At least Callie's sweet new boyfriend, Jeremy, will be coming too.

But nothing goes as planned. The group loses half their food supply. Then they lose their way. And with strange sounds all around her--the snap of a twig, a sinister laugh--Callie wonders if she's losing her mind.

Tensions swirl among the group, with dark secrets suddenly revealed. And then, things take a fatal turn: Callie stumbles upon a cold dead body in the woods.

Is the murderer close by, watching them? Callie has to figure out where she can turn and who she can trust, before her own life is at stake.

Kieran Scott weaves a thrilling mystery that explores love, loyalty--and the dangerous decisions we make in order to survive.

Kieran Scott is an author of young adult fiction including the upcoming TRUE LOVE TRILOGY (May 2014) and the HE'S SO/SHE'S SO TRILOGY, which includes SHE'S SO DEAD TO US, HE'S SO NOT WORTH IT and THIS IS SO NOT HAPPENING. Her other books include the Non-Blonde Cheelerader trilogy, Geek Magnet and Jingle Boy. She also writes Alloy Entertainment books under the pseudonym Kate Brian, including the SHADOWLANDS trilogy and the PRIVATE and PRIVILEGE series, MEGAN MEADE'S GUIDE TO THE MCGOWAN BOYS and THE PRINCESS AND THE PAUPER, among others. She grew up in Bergen County, New Jersey, attended Rutgers University, and now lives in River Vale, New Jersey with her husband and two sons.


I think all of us at AYAP can say we're envious of Kieran for being able to write an entire book in longhand! What did you think of the interview for WHAT WAITS IN THE WOODS? Let us know in the comments!