Amy Spalding, author of KISSING TED CALLAHAN (AND OTHER GUYS), on letting loose

What was your inspiration for writing KISSING TED CALLAHAN (AND OTHER GUYS)?

I wanted to write a romantic comedy where the humor came from awkwardness, and where a bunch of swoony boys got kissed.

How long did you work on KISSING TED CALLAHAN (AND OTHER GUYS)?

It's hard to say! I started on it years ago, and then I had to take over a year off of it to edit THE REECE MALCOLM LIST and INK IS THICKER THAN WATER. Then I came back to it for just a little more work, and before long I was editing it! So there was probably a year of work total, but it was split up a bunch. It was always such a joy to get back to, even when the work was hard.

Writing this book taught me to not fight my own instincts. Growing up, I always worried I had to write Very Serious Literature, even though that wasn't what I loved. This book was the most I ever "let loose" and it turned out to be a really positive experience. It has made me realize I have to trust myself.

If anyone ever finds the key to writing a novel, please put a Hello Kitty keycap on it and drop it off at my door! Honestly, the more books I write, the more I realize it's always a new journey.

I have no ritual! I write hunched over my coffee table, I write during lunch, I write at coffee shops, I have even scribbled notes to myself while stuck in traffic on the 10 Freeway (I DO NOT RECOMMEND THIS!). I am probably a terrible example, but the work gets done, so I guess it's OK!

Be patient with yourself and your career. It can take a long time! I used to think if I didn't get published before I was thirty, I might as well give up! This is really not true, and it was fake pressure I put on myself. Give yourself a break! Write what you love, and take a deep breath. Also, if you like caffeine, chug it, man. It helps.

I am finishing edits on my next book, THE NEW GUY (AND OTHER SENIOR YEAR DISTRACTIONS), which comes out next year! It is about love and rivalry and cute dogs, and it's set in the Eagle Rock neighborhood of Los Angeles. 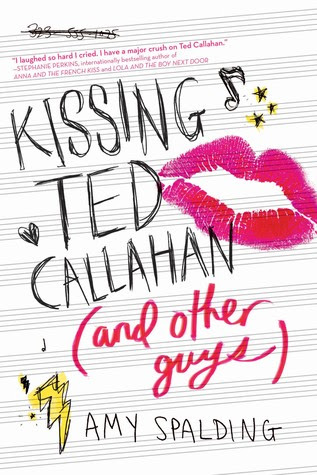 Nick and Norah's Infinite Playlist meets Easy A in this hilariously realistic story of sneaking out, making out, and playing in a band.

After catching their bandmates in a compromising position, sixteen-year-old Los Angelenos Riley and Reid become painfully aware of the romance missing from their own lives. And so a pact is formed: they'll both try to make something happen with their respective crushes and document the experiences in a shared notebook.

While Reid struggles with the moral dilemma of adopting a dog to win over someone's heart, Riley tries to make progress with Ted Callahan, who she's been obsessed with forever-His floppy hair! His undeniable intelligence! But suddenly cute guys are popping up everywhere. How did she never notice them before?! With their love lives going from 0 to 60 in the blink of an eye, Riley and Reid realize the results of their pact may be more than they bargained for.

Amy Spalding grew up in St. Louis, but now lives in the better weather of Los Angeles. She received a B.A. in Advertising & Marketing Communications from Webster University, and currently works as the Senior Manager of the Digital Media team for an independent film advertising agency. Amy studied longform improv at the Upright Citizens Brigade Theatre, and can be seen performing around L.A.

What did you think of our interview with Amy Spalding, author of KISSING TED CALLAHAN (AND OTHER GUYS)? Let us know in the comments!