Tracy Clark, author of DEVIATE, on writing with freedom and abandon

We're thrilled to have Tracy Clark here to tell us about DEVIATE, the second book in The Light Key Trilogy.

Tracy, what scene in DEVIATE was really hard for you to write and why, and is that the one of which you are most proud? Or is there another scene you particularly love?

There is a death in DEVIATE that I never saw coming. Even as I was writing the scene, I didn’t plan on killing this character. It was hard to write because I didn’t want it but the story demanded it.

On the flip side, I love writing romance and there’s a love scene that I think is incredibly complicated emotionally, full of chemistry, and is just plain hot!

How long did you work on DEVIATE?

I probably drafted the first draft of the book over six months. It’s a strange thing to write a series because what you turn in with the subsequent books is much rougher than the painstaking perfection you tried to write with in the first. Of course, there are multiple rounds of edits and a fabulous editor who’s there to guide you and that helps. I wrote book 3, ILLUMINATE, faster than any book I’ve ever written—just three months. And it’s the longest! That was necessary in order for me to give readers an accelerated release date for the final book. Phew! That was a challenge!

Every book teaches you something new. First of all, there was the challenge of writing the middle book of a series and being sure to keep the pacing up while also providing sprinkles of backstory from book one and seeding clues for book 3. A series is a whole nutha’ animal!

SCINTILLATE, the first book in The Light Key Trilogy, was my 4th completed book. By some standards, my journey might not seem that long. I started writing in earnest in 2008 and my first book released in 2014. Aside from the series with Entangled Teen, I have a YA thriller coming out in 2016 from Houghton Mifflin Harcourt called, MIRAGE. I’m now working on my 8th novel and it sometimes surprises me that I’ve done this very hard thing so many times!

Publishing is a rollercoaster ride. The book that landed me my amazing agent, Michael Bourret, made it extremely close to being published. An editor at a major house took it to acquisitions, but was ultimately rejected because it was thought to be too similar to a book they had coming out that ultimately went on to be a bestselling series. Good followed by bad followed by good. Those are the ups and downs of publishing, even after you’re published.

Even The Light Key series had an interesting start. In 2012 the first book also came very close to getting an offer but didn’t sell. A year later, the editor came back and said she couldn’t stop thinking about it and wanted to know if it was still available. I could never have predicted that but I’m so flattered that it stayed with her like that!

When I thought I might never actually sell a book and become a published author, I began writing MIRAGE and because I’d had enough experience crafting a book, and because I was a bit hopeless about publishing, I wrote with a freedom and abandon I never had before. I challenged myself to pull off something I wasn’t sure I could do. I broke rules (because I’d worked so hard on knowing them and learning them first) and I think that “give a damn is busted” attitude made for a stand-out book. It sold very fast. The takeaway is that once you learn the rules, write what scares you and write it with balls out courage. I had to “let go” in order to get where the book needed me to take it.

Do. Not. Give. Up. Don’t. I swear. Are you listening? If you write, I’m guessing you are absolutely compelled to do it and won’t stop. My advice, though, is to be clear about what you think you will FEEL when you achieve whatever goal you have in mind and look for ways to feel those emotions outside of writing. Because so much of this business is out of our control, we need to find ways to cultivate the feelings we think being published will give us. Makes for a happier life on the journey.

I recently went to Paris to do research on a historical YA that is inspired by a real-life mysterious death. I love delving into the setting in Paris, the historical timeframe of 1889, and the mystery of the real-life death and tying all of those elements together. 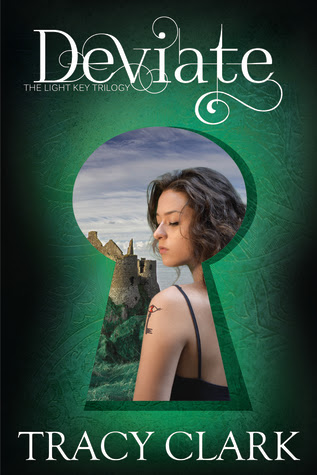 Tormented after a daring escape, Cora Sandoval must find a way to stop the Arrazi from murdering innocent people and from violating, using, and killing the Scintilla for their powers. She must also accept one bitter betrayal: Finn Doyle—the Irish boy who has both a piece of Cora's heart and soul—is Arrazi...

On the verge of extinction and sought by those who would either consume or destroy them, Cora and the remaining Scintilla survivors must solve the mystery of The Light Key. If they fail, the truth will stay buried forever and mankind will pay the ultimate price.

No longer will she hide.

No longer will her loved ones be hunted.

And she will have her vengeance...even if she shatters her heart in the process.

Tracy Clark is a young-adult writer because she believes teens deserve to know how much they matter and that regardless of what they’re going through, they aren’t alone. In other words, she writes books for her teen self.

She grew up a “Valley Girl” in Southern California but now lives in her home state of Nevada, in a small town at the base of the Sierra Foothills. Her two children teach her the art of distraction and are a continuous source of great dialogue. She’s an unapologetic dog person who is currently owned by a cat.

Tracy was the recipient of the Society of Children’s Book Writers and Illustrators (SCBWI) Work in Progress Grant. A two-time participant in the prestigious Nevada SCBWI Mentor Program where she was lucky enough to be mentored by bestselling author, Ellen Hopkins, who taught her so much about the art of writing and cured her of her ellipsis addiction.

Her debut novel was inspired by her enchantment with metaphysics as a teen, seeing it as the real magic in life. Tracy is a part-time college student, a private pilot, and an irredeemable dreamer.