Todd Hasak-Lowy, author of ME BEING ME IS EXACTLY AS INSANE AS YOU BEING YOU, on reading more than you write

We're thrilled to have Todd Hasak-Lowy join us to talk about his novel with the insanely long title ME BEING ME IS EXACTLY AS INSANE AS YOU BEING YOU.

Todd, what scene was really hard for you to write and why, and is that the one of which you are most proud? Or is there another scene you particularly love?

Part of this novel involves an odd love story between Darren (the protagonist) and a girl named Zoey, who is mysterious and quiet.  Early on I thought of Zoey as a girl Darren is attracted to mostly as an idea, or at most as a girl he likes for reasons that are utterly unclear to him.  That kind of attraction felt real to me, but my editor (the awesome Liesa Abrams) convinced me that certain "real" things don't always translate so well on the page.  So I had to make his attraction (and their bond) a little more palpable.  But Zoey just wasn't going to contribute much in terms of direct conversation in order to make this happen.

So I came up with the idea (and like most good ideas, I don't know where it came from) to have her draw a very elaborate, very beautiful design on his forearm during a long bus ride they take together. This drawing appears in a long list titled "7 Instances of Physical Contact Involving Darren and Zoey That Take Place between Battle Creek and Ann Arbor," and I like to believe that this list/scene allows the reader to experience them sharing something non-verbal that nevertheless draws them together.
I'm not sure I'm most proud of this scene, but I'm grateful for it and the way it opened up other related possibilities later in the story (about the meaning of what she draws, about Zoey as an artist in general, etc.).

How long did you work on ME BEING ME IS EXACTLY AS INSANE AS YOU BEING YOU?

I wrote the first draft of this novel in 51 days.  I know because I always email myself whatever I'm writing at the end of each day in order to have a back-up.  The last significant changes to the manuscript were made over two years later.  I worked on other stuff in between, but overall it took way longer than I first expected.

When I was younger, I always got super attached to first drafts of anything good.  I liked to believe that even if it had some flaws that these flaws were more than outweighed by the raw energy in the draft--and that the uniqueness of the draft might be lost if you tried to fix it. But this book taught me that with hard work and guidance and patience that it's possible to improve a manuscript with sapping it of its vitality.

I was fortunate in that I wrote this with a publisher and editor in mind.  Indeed, Liesa more or less ordered that I write a YA novel (this was after she acquired a middle grade novel, then read my earlier work for regular adult readers, and told me I should write for YA).  So I knew this would have a home if it was any good.  But, as mentioned above, it took some time to make it good.

I published three books of fiction before this one.  Depending on how you count, I've written at least two book-length works that haven't yet been published.  One of them will hopefully find a home soon.  As for the rest, it is very much for the best that they remain buried on my hard drive.

The AHA! moment was right at the beginning.  I started writing in list form simply because I was impatient and wanted to get a bunch of raw material for the story on the page before I forgot any of it. And very early on (the first or second day of writing) I realized: whoa, this is kind of cool, and super fun.

When I'm writing (which is more often than not, though sometimes other things get in the way), I write in the morning.  I always listen to music, and finding the right music for a given project is absolutely crucial.  I used to work in cafes, but now I prefer to work at home.

If you want to be a writer, there are two very basic things you must do.  Read and write.  And probably in that order.  The ratio of input (reading) to output (writing) should be--especially early on--something like 100:1.  Also, if you're going to write, write.  Talking about writing and agonizing about writing and telling people you're a writer, none of that's writing.  Writing is writing.

I'm in the middle of a YA love story.  I'm at that point in the project where a small and awful part of me wishes my two main characters could materialize into this world so I could run them over with my car (or, actually, a car much larger than my own).  It's part of the process, at least that's what I like to tell myself. 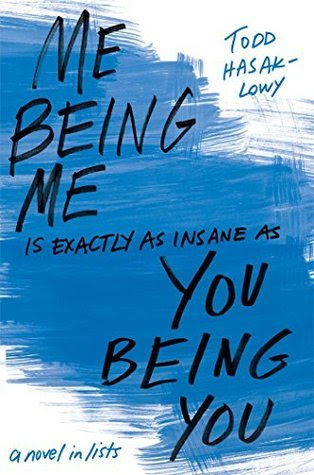 A heartfelt, humorous story of a teen boy’s impulsive road trip after the shock of his lifetime—told entirely in lists!

Darren hasn't had an easy year.

There was his parents’ divorce, which just so happened to come at the same time his older brother Nate left for college and his longtime best friend moved away. And of course there’s the whole not having a girlfriend thing.

Then one Thursday morning Darren's dad shows up at his house at 6 a.m. with a glazed chocolate doughnut and a revelation that turns Darren’s world inside out. In full freakout mode, Darren, in a totally un-Darren move, ditches school to go visit Nate. Barely twenty-four hours at Nate’s school makes everything much better or much worse—Darren has no idea. It might somehow be both. All he knows for sure is that in addition to trying to figure out why none of his family members are who they used to be, he’s now obsessed with a strangely amazing girl who showed up out of nowhere but then totally disappeared.

Told entirely in lists, Todd Hasak-Lowy's debut YA novel perfectly captures why having anything to do with anyone, including yourself, is:

Todd Hasak-Lowy has published several books for adults. 33 Minutes was his first book for young readers and he made his YA debut with Me Being Me Is Exactly as Insane as You Being You. He lives with his wife and two daughters in Evanston, Illinois.