We're excited to have Paula Stokes stop by to talk about her latest novel LIARS, INC.

Paula, how long did you work on LIARS, INC.?

I got the idea for the manuscript in mid-2010, but let things marinate while I wrote Venom and The Art of Lainey. I started writing Liars, Inc. in fall of 2011 and finished in early 2012. Depending on how many other jobs I'm working, it usually takes me two to four months to draft a book and another two to four months to revise it.

People who enjoy male POV books like Anna Dressed in Blood, the Curse Workers trilogy, or the I Hunt Killers series will probably like spending a few hours in Max's head. He is very much a "guy's guy," like Cas or Cassel, minus their powers. If you read a lot of murder mysteries and liked stuff like Gone Girl, TEN, or Dangerous Boys, I think you'll enjoy the whodunit aspect of the book. [Spoiler: it was ME! :D]

This is the best question ever because LIARS taught me some hard lessons about how I need to write.

Lesson #1: Use time wisely.
I waited about nine months for an edit letter, which is pretty standard for me, but during that time I worked on other projects and didn't give LIARS much thought. When my letter arrived, I had just moved to Portland and was orienting full-time at a new job. I was so bogged down with errands and extra training that I ended up working 80+ hours a week between my day job and revising for a full month. Add to that I decided to completely rewrite the ending, and the resulting manuscript was kind of a wreck. My lovely editor gave me three weeks for copy-edits but instead of spending all of that time fixing the problems I had introduced into the story, I spent half of it writing a proposal for another project. Bad Paula! Consequently, my ARC wasn't as tight as I wanted and I inconvenienced everyone by requesting over a hundred changes to it after typesetting.

I've waited about the same amount of time for my VICARIOUS letter, but this time I have re-read the MS several times, written a self edit letter highlighting changes I want to make, organized all my notes in a special folder, and created a detailed outline for the second book in the duology so I can make sure everything I need for book #2 is included in book #1--preferably before we go to copy-edits.

Lesson #2: Read aloud to fix prose and read silently to fix plot issues.
I spent most of my copy-edit time reading aloud to catch repeated words or awkward passages and missed some basic plot and continuity issues that I feel like I would have caught if I'd been reading silently. Next time I will be sure to review both silently and aloud at the copy-edits and first-pass pages (final revision) stages.

I have two drawer novels, one of which will stay forever buried and one of which I'm going to retool into an adult novel. My publication path was unusual because my first books were work-for-hire, but since then I've gone from a paperback to a hardcover to dual publishers and next I hope to branch out into multiple age groups. It's been a lot of work, but my path feels like a "work your way up" progression, which is ideal for my personality.

So many things. It's okay to feel sad and stressed and frustrated and bitter with envy. All of these feelings are human and uncontrollable. It's what you do with your negative emotions that matters. Try to channel them to work harder. Always strive to be better. Realize that you will be judged, sometimes harshly, sometimes unfairly. But never give your negative reviews more credence or weight than your positive ones--to do that is like saying your fans don't matter, and in the end they're the ones who decide if you get to stay in this business. Don't quit. Or if you do quit, make that choice because it's what's right for you, not anyone else. Read. Read more. Take a break. Finally, never forget why you started writing in the first place.

I'm finishing up an NA book that I'm hoping to sell later this year. Then I have two sets of edits to do for my 2016 books (VICARIOUS and BAD LUCK CHARM) and two more manuscripts to draft for my 2017 books. Basically it's going to be a busy year, but when you're a writer that's always a good thing :) 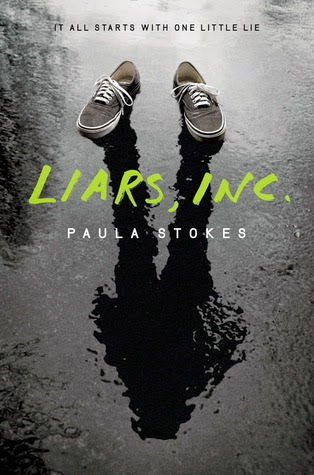 For fans of Gone Girl, I Hunt Killers, and TV's How to Get Away with Murder.

Max Cantrell has never been a big fan of the truth, so when the opportunity arises to sell forged permission slips and cover stories to his classmates, it sounds like a good way to make a little money and liven up a boring senior year. With the help of his friends Preston and Parvati, Max starts Liars, Inc. Suddenly everybody needs something and the cash starts pouring in. Who knew lying could be so lucrative?

When Preston wants his own cover story to go visit a girl he met online, Max doesn’t think twice about hooking him up. Until Preston never comes home. Then the evidence starts to pile up—terrifying clues that lead the cops to Preston’s body. Terrifying clues that point to Max as the murderer.

Can Max find the real killer before he goes to prison for a crime he didn’t commit? In a story that Kirkus Reviews called "Captivating to the very end," Paula Stokes starts with one single white lie and weaves a twisted tale that will have readers guessing until the explosive final chapters.

Paula Stokes writes stories about flawed characters with good hearts who sometimes make bad decisions. She’s the author of THE ART OF LAINEY, INFINITE REPEAT, LIARS INC., and several other forthcoming YA novels. When she's not writing, she's kayaking, hiking, reading, or seeking out new adventures in faraway lands. Paula loves interacting with readers. Find her online at authorpaulastokes.com or on twitter as @pstokesbooks.