Today we welcome author Caroline Starr Rose, author of MG historical fiction Mary B. and recently released Blue Birds. While we all know that one size never fits all in the stories we read, have you ever considered that the same may be true in the process with which we write them? I love her take on a unique creative process for each book. Thank you, Caroline!


I’ve never approached writing the same way twice. This used to really distress me, rule follower that I am. After all, I’ve read in books and on blogs all the things I must do while writing: count my words, draft quickly while shutting down my internal editor, plot and outline, fill out character charts. If I didn’t do these things or found my approach had changed, I was sure I was doing something wrong.

Learn to write this book.


These five words gave me permission to listen to the work at hand and follow its lead, even if that meant my approach felt inefficient or weird or inconsistent. I realized it was okay not to mash a story into a system that had worked for another project. Each book is its own beast and will unfold in its own way.

That said, there are some general things I do while writing novels. I start with a historical event or era that interests me and read broadly, trusting some sort of story idea will bubble up to the surface in the midst of my research. I keep a notebook filled with quotes, questions, maps, lists, and the like. I need a firm sense of my setting and a general sense of my key characters before I begin (though these things often change). Writing at this point feels a bit like a science experiment: This setting + this character x this event = this outcome. Before I begin, I have a sense of some key turning points. Often I know the final scene but have no idea how to get there.

Then I draft painfully and slowly. I fret a lot. I’m sure I’m a fraud. I have the awful habit of comparing my fledgling ideas to my finished work and easily convince myself I’ll never be able to do it again. This is when I lean hard on my writing friends who tell me they believe in me. I borrow their belief and keep moving forward.

I like to say I’m an intuitional writer with a lousy sense of intuition. While I can sense a developing plot while reading, I can't for the life of me understand plot while I’m drafting. This leads to angst and fretting and eventually my editor saying things like, “What scene, exactly, did you mean to be the climax?”

Revision is my favorite part of the writing process. It’s where I truly get to know my book and characters. I love trusting my critique partners to show me how to shape things. I adore working with my editor to make the story right. Each time an editorial letter comes, I have to take a deep breath before diving in. By page five or six or twelve my eyes glaze over with all the glaring errors I didn't see until that moment. It's so much to take in, I have to walk the dog for a few days and let things settle. From there I might start with big changes or might begin with page one. See? Never the same.

I'm not an author brimming with ideas. It’s hard to leave the world of one book and rush into another, even if I do know what I want to work on next. So I try to be gentle with myself at these times. I spend time in the kitchen, walk the dog more often, lose myself in reading, run with mindless music, even find the motivation to clean the house. A part of me thinks there will never be another book, that I've forgotten how to do it (and didn’t really understand the whole “writing thing” to begin with anyway). But sooner or later I get the itch to poke around with something new, even if I don’t know what that something is yet. It’s exhilarating and terrifying and grand. And as much as I might deny it in the middle of a first draft, I wouldn't have it any other way. 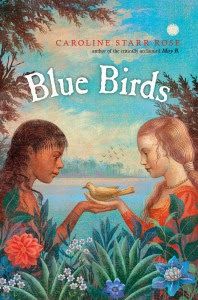 It’s 1587 and twelve-year-old Alis has made the long journey with her parents from England to help settle the New World, the land christened Virginia in honor of the Queen. And Alis couldn’t be happier. While the streets of London were crowded and dirty, this new land, with its trees and birds and sky, calls to Alis. Here she feels free. But the land, the island Roanoke, is also inhabited by the Roanoke tribe and tensions between them and the English are running high, soon turning deadly.

Amid the strife, Alis meets and befriends Kimi, a Roanoke girl about her age. Though the two don’t even speak the same language, these girls form a special bond as close as sisters, willing to risk everything for the other. Finally, Alis must make an impossible choice when her family resolves to leave the island and bloodshed behind.

A beautiful, tender story of friendship and the meaning of family, Caroline Starr Rose delivers another historical gem.

A former history teacher, Caroline Starr Rose’s historical research and distinctive prose blend beautifully, creating a rich portrait of early American life that is perfect for bedside tables and classroom desks. Her debut novel, May B. has received several starred reviews and was selected as an ALA Notable Children's Book. Rose lives in New Mexico with her family.