John C. Ford, author of THE CIPHER, on being inspired by a news article


John C. Ford joins us with his techno-thriller THE CIPHER, which taps into current concerns about internet privacy.

John, please tell us about your inspiration for writing THE CIPHER.

I read a news article about a teenage boy who may have solved a math riddle known as the Riemann Hypothesis.  I knew nothing about it at the time, but the article said that the Riemann Hypothesis--which dates back to the 1850s--had important implications for modern computer encryption systems.  I couldn't believe that a math problem that was over 150 years ago could be the key to modern computer security, but as I researched more, I discovered that it is absolutely vital to encryption.  The boy's solution turned out to be a false alarm.  But then I wondered:  what if he HAD solved it, and what if that solution gave him the ability to see any encrypted material?  I was off and running with The Cipher . . . .

The opening of the book was difficult to write -- it's a prologue-type scene with an older character, which you realize the importance of later on.  I'm really pleased with the way that turned out, and I think it sets the right tone for the story to come.  Also, there's a one scene in which the two main characters, Smiles and Melanie, go out to eat and end up getting in a fight.  They are both quite vulnerable at that moment in the story, each of them feeling hurt for different reasons.  Something about that scene just worked for me, and if I had to pick one of my favorites that would be it.

I think The Cipher would appeal to anyone who likes the Alex Rider stories, or Cory Doctorow's Little Brother.  Fans of Ally Carter's Gallagher Girls or Heist Society books might enjoy it, too.  I hope anyone who likes thrillers or mysteries will give it a chance.

What do you hope readers will take away from THE CIPHER?

When you write a book about codes and encryption, I think the expectation is to say that you hope readers appreciate the importance of math, etc., etc.  Which, for the record, I do.  But this is not a math book; it's a thriller written for entertainment.  So I hope they come away having enjoyed the roller coaster ride that the characters went through.  And I particularly hope that they relate in some way to the characters -- the slacker Smiles, the genius Ben, and the "perfect" girl, Melanie. 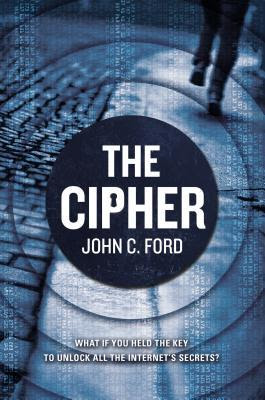 You think your emails are private?
Your credit card number is secure?
That stock trades, government secrets, and nuclear codes are safe?
...th1nk aga1n.

Robert “Smiles” Smylie is not a genius. He feels like he’s surrounded by them, though, from his software mogul dad to his brainy girlfriend to his oddball neighbor Ben, a math prodigy. When Ben cracks an ancient, real-life riddle central to modern data encryption systems, he suddenly holds the power to unlock every electronic secret in the world—and Smiles finally has a chance to prove his own worth.

Smiles hatches a plan to protect Ben from the government agents who will stop at nothing to get their hands on his discovery. But as he races from a Connecticut casino to the streets of Boston, enlisting the help of an alluring girl, Smiles comes to realize the most explosive secrets don’t lie between the covers of Ben’s notebook—they’re buried in his own past.

Eerily close to reality and full of shocking twists, this techno-thriller reveals how easily the private can become public, and just how dangerous it can be to encrypt our personal histories.

John C. Ford (johncfordbooks.com and @fordjohnc) is the author of The Morgue and Me, a YA take on the classic detective novel that was nominated for an Edgar Award and short-listed for five different state teen book awards. A former litigator who practiced in the nation's capital, he eventually returned to his love of writing fiction, and to his hometown outside Detroit, Michigan.
Jocelyn Rish at 6:00 AM