Jessica Brody, author of UNCHANGED, on how writing a book is like building a house

As you can see from yesterday's large lineup of talented authors, we are very fortunate because so many generous folks are willing to stop by and share information about their books and writing processes. As a result, our Saturdays have become jam-packed with awesome interviews. We have decided to spread the wealth by opening up Sundays for author interviews, too. Going forward, we will share writing advice, inspiring journeys to publication, and behind-the-scenes info about the creation of your favorite books on both Saturdays and Sundays. Remember to swing by on both days to hear from from many wise and wonderful writers.

Kicking off the first Sunday of interviews is Jessica Brody with her latest novel UNCHANGED, the third and final book in her Unremembered Trilogy.

So, Jessica, what was your inspiration for writing the Unremembered Trilogy?

Normally the scenes I’m the most proud of or really fall in love with are scenes that feel effortless. They kind of just flow out of me and I feel like I don’t have to try. Like I’m just a vessel through which the story is being told. I love when that happens. Of course, it’s not every day. I’m lucky if I get 2 or 3 of those per book.

In UNCHANGED, the final book in the Unremembered trilogy, one of those scenes was actually the very last scene of the book/series. I’d had that ending in mind since I started writing the first book and I wouldn’t let myself skip ahead and write it early. So when I finally got to that scene, I felt all this enormous pressure to make it right…not to mention STRESS that I would fail and it wouldn’t come out as good as it had been in my head for the past four years. Fortunately, I love what I wrote. I think it’s even better than I pictured it. And I hope readers love it too.

What book or books would most resonate with readers who love your book--or
visa versa?

The Unremembered Trilogy has been compared to some really amazing books. Some of my favorites (that I’m honored to be compared to!) are MAXIMUM RIDE by James Patterson, ORIGIN by Jessica Khoury, and THE MAZE RUNNER by James Dashner.

How long did you work on UNCHANGED?

UNCHANGED took longer than any other book in the trilogy. And that’s probably because I wrote 250 pages and then totally scrapped them all and started over. It was one of those crazy pivotal moments in your career when you just have to follow your gut (and my gut was telling me this wasn’t the right book) and start over from scratch. I’ve never done that before in my published career. It was really scary at the time but the book was SO much better because of it!

That sometimes you write the wrong book. And sometimes you have to right the WRONG book (or the first 250 pages of it) before you can realize what the RIGHT book is.

What do you hope readers will take away from UNCHANGED?

First and foremost, I write my books to entertain readers. If they get something extra out of the process, then that’s just a nice bonus. To me, this book (the whole series really) is about the delicate balance between science and nature. I’m all for technological innovation and progress, but at what cost? And at what point are we just messing with something nature mastered a long time ago? I set out to explore these questions in this trilogy. And it would be a nice bonus if readers took something away about that after reading.

My road to publication was quite long and difficult. It took me five years to sell my first book. Actually my “first” book was never published. It’s still sitting on my shelf! I tried for three years to get an agent for that book and eventually started a new book that would become my first published novel. After five years, I finally landed my first agent and she sold my book in only 10 days! So I like to say my overnight success story took five years. ☺

Actually, there was! My first book to ever sell was a women’s fiction novel called THE FIDELITY FILES, about a “fidelity inspector” who was hired by suspicious wives and girlfriends to test the fidelity of the men in their lives. I shopped that book all around town for years, constantly tweaking it and rewriting and yet I still got the same feedback. It was too dark and depressing. The main character, Jennifer Hunter, saw nothing but cheating spouses and it was a downer. Plus no one could understand why Jennifer just didn’t quit her job since she clearly hated it so much.

Then I got a rejection from my agent that changed everything. She said, “I think this would work so much better if Jennifer thought of herself like a modern superhero. She loves her job. She feels like she’s righting an epic wrong. Saving the world from infidelity, one cheater at a time.”

I nearly gasped when I read this. It was the magic ingredient that I’d been missing. The subtlest shift in the kaleidoscope to make the whole thing take shape. I instantly started rewriting the book from scratch with this note. I sent that agent the first 100 pages to see if I was on the right track. She ended up signing me on those 100 pages and we sold the book as soon as it was finished.

First off, I have a really cool “white noise” track that I listen to when I write. It’s a track called “Waterfall Entrainment” and it’s nothing but a constant waterfall sound that goes “SHHHHHHHH!!!!” in my ear. I loop it and play it full blast.

And second, I ONLY drink coffee when I’m writing. I’ve actually managed to trick my brain into thinking that coffee equals productivity. Plus, limiting my caffeine intake makes the caffeine more effective. So as soon as that coffee hits my blood stream, I am ready to rock!

In fact, I actually wrote a whole blog post about this. It’s called How to Trick Your Brain Into Writing. You can view it here: http://www.jessicabrody.com/2011/05/tips-for-writers-how-to-trick-your-brain-into-writing/

Don’t be afraid to write badly. All writers have awful first drafts. That’s why they’re called first drafts. Sometimes you have to just get through the story before you can make it pretty. I think a lot of new authors quit halfway through the book because they’re afraid that it’s not good. The first draft won’t be good. Just finish it and make it good later. The hardest part about writing a book is getting to that last page.

Writing a book is like building a house. You can’t worry about where to hang the pictures or what color to paint the walls until you actually build the house. Get the foundation down, get the story in place, then worry about whether or not it all looks pretty.

I just turned in my next book to my editor. It’s a contemporary comedy called A WEEK OF MONDAYS, about a teen girl who has to repeat the same awful Monday (in which her boyfriend breaks up with her) over and over again until she figures out how to fix it. It’s kind of like Groundhog Day meets Some Kind of Wonderful.

It was really fun to go back to something light and comedic. Especially after writing UNCHANGED, which is by far the darkest of the trilogy. 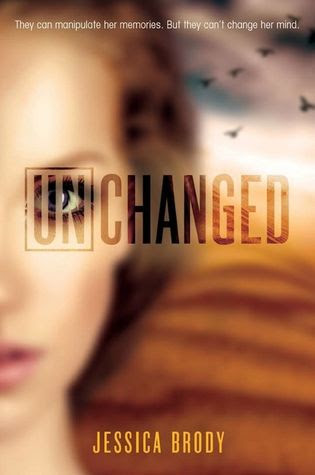 In this mesmerizing conclusion to the Unremembered trilogy, Sera will fight those who have broken her.

After returning to the Diotech compound and receiving a successful memory transplant, Seraphina is now living a happy life with another synthetically engineered human like herself, with whom she is deeply in love. She has no recollection of Zen. But the nagging feeling that something is missing from her life continues to plague her. Diotech's newest product is about to be revealed—a line of genetic modifications that will allow people to live longer, fight disease, and change any unfavorable physical attribute they desire.

As more secrets are revealed, more enemies are uncovered, and the reality of a Diotech-controlled world grows closer every day, Sera and Zen must find a way to destroy the company that created her, or they’ll be separated forever.

Jessica has sold ten novels (two adult novels to St. Martin’s Press and eight young adult novels to Farrar, Straus, Giroux/Macmillan Children’s.) These books include Fidelity Files, Love Under Cover, The Karma Club, My Life Undecided, 52 Reasons to Hate My Father, Unremembered, Unforgotten, and Unchanged. Unremembered was recently optioned for film by the producers of The Vampire Academy, Zero Dark Thirty, Life of Pi and Slumdog Millionaire. Jessica’s books are published and translated in over twenty foreign countries including the UK, France, Germany, Italy, Czech Republic, Norway, Denmark, China, Russia, Brazil, Poland, Bulgaria, Israel, and Taiwan. Jessica now works full time as a writer and producer. She currently splits her time between Los Angeles and Colorado.
Jocelyn Rish at 6:00 AM