SILENT ALARM is the latest novel by Jennifer Banash, and we're honored to have her with us to share more about this powerful story.

Jennifer, what was your inspiration for writing SILENT ALARM?

The 2012 shooting in Chardon, Ohio. I remember reading a news article about the case, and it mentioned that the shooter had a younger sister. I wondered what it must've been like for her . . . And although the real-life sibling didn't attend the same school as her brother, I began to wonder, what if? What would it be like to have to return to school in the same town where your brother committed such an unspeakable act? How could you face your friends? And so Silent Alarm was born. It's funny because I was contractually obligated at the time to write an other book entirely. It's a testament to my amazing editor, Stacey Barney, that she trusted me enough to let me run with the idea--especially since it's such a dark, sensitive topic overall.

The book opens with the shooting, and that was an incredibly difficult scene to write. I must've reworked it at least ten times before I finally felt OK about it. It's a really intense scene, and since I'm not only a writer but a high school teacher myself, I could really picture it unfolding in my mind. I would literally start to sweat, just sitting at my desk, typing away. I also felt a tremendous responsibility to the victims of these types of horrific events. I wanted to be respectful. I didn't want to let anyone down or portray the violence in a way that felt fake.

Before I had my daughter two years ago, I could only work in a coffee shop, with headphones on, usually listening to the same song over and over (don't ask me why, but it helps for some reason). Now, though, I can work anywhere! In the middle of traffic, a Turkish prison, a minefield :) Having to still write when you have a newborn screaming away, and then a toddler running rampant around your house like a tiny mental patient teaches you to just knuckle down and DO IT. Now I write like someone's going to come in and wrestle the computer away from me--which they usually are! 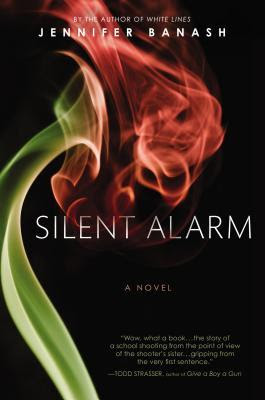 Alys’s whole world was comprised of the history project that was due, her upcoming violin audition, being held tightly in the arms of her boyfriend, Ben, and laughing with her best friend, Delilah. At least it was—until she found herself on the wrong end of a shotgun in the school library. Her suburban high school had become one of those places you hear about on the news—a place where some disaffected youth decided to end it all and take as many of his teachers and classmates with him as he could. Except, in this story, that youth was Alys’s own brother, Luke. He killed fifteen others and himself, but spared her—though she’ll never know why.

Alys’s downward spiral begins instantly, and there seems to be no bottom. A heartbreaking and beautifully told story.

Jennifer Banash is the author of the critically acclaimed Young Adult novel, White Lines, published by G.P. Putnam & Sons, and the fothcoming novel Silent Alarm, which will be released in March, 2015. Banash is also the author of The Elite series of books from Berkeley Jam which includes The Elite, In Too Deep, and Simply Irresistible. Banash lives, work, and writes in Los Angeles, California, with her daughter, Story, partner Willy, and two slightly food-obsessed beagles.