Becky Wallace, author of THE STORYSPINNER, on locking herself in a quiet place

THE STORYSPINNER is the first book in the The Keepers' Chronicles, and we're happy to have Becky Wallace here to tell us how it came to be.

So, Becky, how long did you work on THE STORYSPINNER?

Well...that's depends on how you look at it.  I wrote one scene then set it aside for almost two years. When I finally came back to it, I finished the entire story including critique partner and agent revisions in less than two months.  It's the fastest I've ever written anything. I hope I'll be able to do that again someday!

I think everyone's road to publication has bumps.  Mine came in different places than most.  I completed my first manuscript as part of NanoWriMo in November of 2010, and had an agent by April of 2011.  I thought I'd be that story -- you know, the one where the writer gets an agent easily, gets a book deal easily, becomes a best seller without even thinking anything about it.

I am NOT that story.

My first manuscript did not sell. My second manuscript got cut at acquisition. My agent did not like my third manuscript.  I wanted to quit. I was the only name on my agent's list without a single sale. At that point I made a promise to myself that if my fourth manuscript didn't sell I'd give it up for good.  I'd go back to being a "hobby" writer instead of a serious one.  Being serious wasn't doing me any good.

Sometimes it's that ultimatum that pushes us to do our best work (and probably why some writers do better work on deadline).  I wrote THE STORYSPINNER thinking it was going to be the last thing I ever wrote...and had responses from publishers within a month.  It was miracle. It was relief.  I'm undeniably grateful that I gave writing one more chance!

I probably have the world's worst writing habits.  My attention span is so painfully short that unless I'm really locked into a scene I find myself checking my email or twitter every five minutes. That's not an exaggeration. I actually timed myself.

To get anything done, I have to lock myself in a quiet place -- literally lock the door --put my headphones in and set my timer. I force myself to work for twenty minutes without giving in to any distractions. If I'm thirsty, it has to wait. If I hear an email/text/tweet come in, it has to wait.  Sometimes I cheat (usually when I'm really struggling with a chapter), but I try to wait for the big two-oh to roll around on my clock.

Find good critique partners.  I credit my success to the people who read my crappy first (and second and third) drafts and point out all of my mistakes.  They are essential to making my stories readable.  ESSENTIAL.

Besides that, look for opportunities to listen to experienced authors talk about their craft.  If you're the only adult at a teen conference (you won't be), then own it.  If there's an author panel at your local independent bookstore, attend it and ask thoughtful questions.  I learned more about the publishing industry in the first five minutes of a dinner with two authors than I did in five months on the internet.
What are you working on now?

I just turned in my revisions for Book 2. YAY!  I'm doing a lot of promotion related stuff for THE STORYSPINNER, but am also sneaking in an hour here and there to work on a project I set aside when my book sold.  It's so fun to draft again! 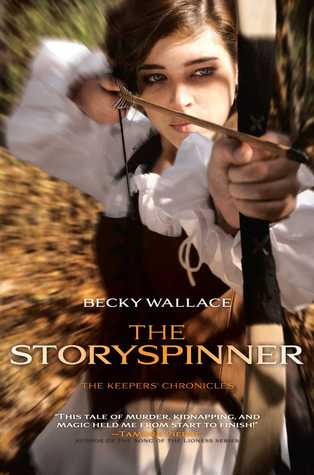 Drama and danger abound in this fantasy realm where dukes play a game for the throne, magical warriors race to find the missing heir, and romance blossoms where it is least expected. In a world where dukes plot their way to the throne, a Performer’s life can get tricky. And in Johanna Von Arlo’s case, it can be fatal. Expelled from her troupe after her father’s death, Johanna is forced to work for the handsome Lord Rafael DeSilva. Too bad they don’t get along. But while Johanna’s father’s death was deemed an accident, the Keepers aren’t so sure. The Keepers, a race of people with magical abilities, are on a quest to find the princess—the same princess who is supposed to be dead and whose throne the dukes are fighting over. But they aren’t the only ones looking for her. And in the wake of their search, murdered girls keep turning up—girls who look exactly like the princess, and exactly like Johanna. With dukes, Keepers, and a killer all after the princess, Johanna finds herself caught up in political machinations for the throne, threats on her life, and an unexpected romance that could change everything.

In second grade, Becky Wallace had to sit in the corner because she refused to write anything except princess stories and fairy tales (and because she talked too much). Her time in isolation gave her plenty of opportunities to dream up the fantasy worlds she’s been dabbling with ever since. She was lucky enough to find her own real-life Prince Charming. They have four munchkins and live in happy little town near Houston, Texas.
Jocelyn Rish at 6:00 AM