Andrea Seigel, author of EVERYBODY KNOWS YOUR NAME, on becoming comfortable in your own skin

Andrea Seigel and Brent Bradshaw co-wrote EVERYBODY KNOWS YOUR NAME, and we're excited to have Andrea here to tell us more about the book.

Andrea, what scene of EVERYBODY KNOWS YOUR NAME was really hard for you to write and why, and is that the one of which you are most proud? Or is there another scene you particularly love?

I can't talk about the scene in too much detail because it's a turning point in the book, but there comes a moment when Magnolia has to accept who she really is- how she really is- and that means putting herself in an uncomfortable situation wherein she knows she's going to disappoint some people. It was hard to write because I want the reader to understand this is the right thing for her to do, even though I think a lot of people would interpret her as being ungrateful, or melodramatic. So if I did a good job, you get her. And if I didn't do a good job, you think she's a brat.

I think Nick And Norah's Infinite Playlist shares some tonal similarities with our book, in terms of having a romance with alternating narrators and the importance of music as a backdrop and the drier humor.

Well, it was the first book I ever wrote with somebody- my boyfriend- and it simultaneously taught me that I'm able to collaborate, but also that I'm pretty stuck in my ways.

What do you hope readers will take away from EVERYBODY KNOWS YOUR NAME?

That becoming comfortable in your own skin is a lifelong and incremental practice.

Maybe I'm just a narcissist, but when I wrote the first line of my first book- "This afternoon in drama (I’m taking it because Mrs. Amis said I needed to show interest in the arts on my transcript, and I can’t draw) I was supposed to be throwing a fake beach ball up and down, but I just couldn’t do it anymore."- I just knew. I just said to myself, hey, you're doing this. Maybe it was that I immediately understood the voice I was writing.

It's changed since I had my daughter, but I tend to work every weekday from 2-6 p.m. I'm now out in the garage. I light a scented candle from Target because the garage has this lingering smell of oregano/tomatoes ever since Brent sprayed it with this organic pest deterrent that I can't handle. I check out celebrity gossip sites for about a half-hour. And then I write, usually in silence.

Don't try to be something you're not. 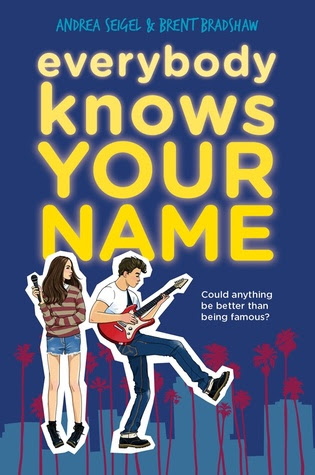 Meet Magnolia. Her father's dead, her boyfriend's ditched her to commit himself more fully to surfing, and her mother's depressed because she can't get cast on The Real Housewives of Orange County. All Magnolia wants is to reinvent herself.

Meet Ford. Half his family is in jail, the other half probably should be, he shoplifted his way into a job at a record store, and his brother pawned his 1953 Telecaster for a quick buck. All Ford wants is to reinvent himself.

Ford, meet Magnolia. When the two teens are cast in Spotlight, a reality TV singing competition, both see it as their chance to start anew. With each episode, as they live together in a Hollywood Hills mansion and sing their hearts out, Ford and Magnolia fall in love. But how genuine can that love be when a television audience is watching their every move—and when their pasts are catching up to them so much faster than they can run?

ANDREA SEIGEL is the author of two novels for adults, Like the Red Panda and To Feel Stuff, as well as the YA novel, The Kid Table, and the forthcoming YA novel, Everybody Knows Your Name, co-written with Brent Bradshaw. In September 2014 A24 released the film Laggies, written by Seigel, directed by Lynn Shelton, and starring Keira Knightley, Chloe Moretz, and Sam Rockwell. She lives in South Pasadena.

BRENT BRADSHAW is a television writer and actor. He has written for the Emmy Awards, the MTV Movie Awards, the People’s Choice Awards, and others. He has also appeared on HBO’s “Enlightened” as well as late night shows like “Lopez Tonight” and “Last Call With Carson Daly.” He is the author of Everybody Knows Your Name, co-written with Andrea Seigel.
Jocelyn Rish at 6:00 AM