Alethea Kontis, author of DEAREST, on being inspired by actors and their characters

DEAREST was released a few weeks ago, and it is Alethea Kontis's third book of The Woodcutter Sisters, her series that weaves together various fairy tales. Alethea's publisher has generously provided a copy of DEAREST for one lucky winner, so make sure to enter below.

So, Alethea, what is your favorite thing about DEAREST?

When I was 27, someone I cared about deeply committed suicide. In Dearest, I brought him back to life. That person was Jonathan Brandis.

YES, it was a schoolgirl crush of the first water, an unrequited friendship over which I spent countless hours of my teenage youth daydreaming. But when I got the news that he'd killed himself...it hit me like a truck. I was actually surprised at how intense my reaction was. We were the same age. I had already begun to blossom into my strange and beautiful life. It was not out of the realm of possibility that we might meet one day, and wouldn't I have a story to tell him! Only now we never would.

When Mr. Eko (Adewale Akinnuoye-Agbaje) died on the television show Lost, I was so upset that I immediately wrote him into the book I was working on at the time...and thus the character of Jolicoeur sprang forth into Enchanted fully formed. Who said I couldn't do the same for Jonathan? From this beautiful, sad, innocent, unrealized affection, came the character of Tristan Swan. While I was at it, I mentally cast the roles of Tristan's brothers, using some other star crushes of my youth. For instance: Sebastian is absolutely Noah Hathaway. I actually met Noah at Dragon Con back in 2003. I told him this fun story about Atreyu and this naming game my little sister and I used to play on long road trips. I am sure he still remembers me.

What was your inspiration for writing DEAREST?

The "base note" fairy tale of Dearest is Hans Christian Andersen's The Wild Swans. Followed closely by The Goose Girl, Swan Lake, Tristan & Isolde, and Robert San Souci's A Weave of Words.

The hardest scene for me is always the "kill the bad guy" scene, because I never plot it out in advance. I know it needs to happen, but once I get there I have to think to myself, "Okay...now where are we and what have we got to make this happen?" It makes me feel a lot like Danny Ocean planning a heist on the fly.

I do rather love the Ladyhawke-type scene at the end of Chapter 3...no spoilers, but that is the scene I read out loud when I'm on book tour. It gets a fabulous response. When I finish I snap the book shut and say, "Don't worry. Buttercup does not get eaten by the sharks at this time," just like the grandfather does in The Princess Bride. (The book, not the movie. READ THE BOOK.)

I also love the scene where a certain person shows up at the end of Chapter 15. He did not originally show up there in the first draft of the manuscript, but I caught a flaw in my logic during the revision and POOF! There he was and it changed everything else, all the way to the end. You know how authors say, "This character just showed up and started talking in their voice and I couldn't do anything but go with it"? It's a rare occurrence for me, but that's exactly what happened here. Like magic.

How long did you work on DEAREST?

One year. Most of the writing was done in that last few months, but it was SO nice to have the whole year to fully develop the characters and work out the plot devices. I was forced to write Hero in only a few months, so having a full year for Dearest was positively blissful.

That I really wish I had a year to write every book! But even then, the writing doesn't get done unless I sit my butt in that chair and do it.

What do you hope readers will take away from DEAREST?

My hope for the whole Woodcutter series is that it inspires people of all ages to read (or re-read) the original Grimm, Andersen, Lang, and Perrault fairy tales, as well as all the other classic fantasy literature I reference in my books. Disney is a great storyteller, but I feel we lose much by letting our children believe that Disney invented fairy tales.

I was born into a family of storytellers. I started reading when I was three. I started writing around the age of eight, mostly poetry. I wrote tons of poetry and short stories and essays and everything else. I started my first novel at the age of eleven (see Wattpad), but though I rewrote it in high school, I never finished it. I only finished one novel before Enchanted (which was originally published as a short story called "Sunday" in Realms of Fantasy magazine).

But Enchanted was not the first book I sold. That book was AlphaOops: The Day Z Went First, which I wrote in eight hours and emailed to a friend who worked in the book industry. She then forwarded it to a friend of hers, and a few months later I received a surprise call from the head editor of Candlewick Press, enthusiastically telling me that the art director had read my story out loud to the entire department and they were all cracking up and could they PLEASEPLEASEPLEASE publish it?!? (I said yes.)

I've had a couple of those AHA! Moments. The first, and biggest, came when I was about nine years old...after I wrote a poem in school called "Friendship." The world CLICKED and I knew--KNEW--I was a writer. I announced to my parents that if the whole acting thing didn't pan out (I had just starred in an 8-part miniseries on our local PBS affiliate) that I would fall back on writing. My parents didn't care for that statement...which is why I have a degree in Chemistry.

The second biggest AHA! moment was when I working on "Sunday" as a short story. The world just kept getting bigger and bigger in my head. I'd had yet another epiphany while driving to my little sister's house in Charleston for Spoleto opening weekend, at which point I had to make a deal with myself. I was allowed to leave all these brilliant new details out of my short story, so long as I immediately turned the story into a novel when I was finished. That was one promise to myself that I was very happy to keep.

I prefer silence and a comfy chaise lounge, but I will write anywhere, anytime, on anything (I have multiple scenes on Starbucks receipts and poems scribbled on the back covers of comic book digests to prove it). Here's my typical writing routine:
Step 1: Sit down with hot coffee/tea, glass of water, and laptop.
Step 2: Write until coffee/tea gets cold.
Step 3: Heat up coffee/tea in microwave.
Step 4: Repeat.
It's very glamorous, I tell you.

Be Kind.
Be Patient.
Be Stubborn.

That is SUCH a dangerous question to ask me. Let's see...right now I'm editing the newest Fairy Tale Rant video and waiting to hear back from Janet Lee about the release date of our Diary of a Mad Scientist Garden Gnome. I'm working on chapter six of Trixter, a Trix novella that runs parallel to the Woodcutter sisters novels. I'm plotting out Book Four of the Woodcutter Sisters (Thieftess), and revising the first of a trilogy of New Adult short contemporary romance novels set in Sand Point, Florida. GAH, as Sophie Hatter says. There need to be more hours in the day! 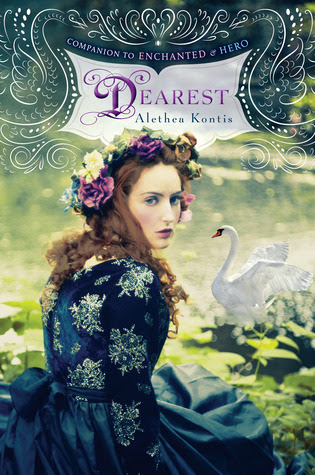 In her third book about the delightful Woodcutter sisters, Alethea Kontis masterfully weaves "The Wild Swans," "The Goose Girl," and a few other fine-feathered fairy tales into a magical, romantic companion novel to Enchanted and Hero.

Readers met the Woodcutter sisters (named after the days of the week) in Enchanted and Hero. In this delightful third book, Alethea Kontis weaves together some fine-feathered fairy tales to focus on Friday Woodcutter, the kind and loving seamstress. When Friday stumbles upon seven sleeping brothers in her sister Sunday's palace, she takes one look at Tristan and knows he's her future. But the brothers are cursed to be swans by day. Can Friday's unique magic somehow break the spell?

New York Times bestselling author Alethea Kontis is a princess, a fairy godmother, and a geek. She’s known for screwing up the alphabet, scolding vampire hunters, and ranting about fairy tales on YouTube.

Her published works include: The Wonderland Alphabet (with Janet K. Lee), Diary of a Mad Scientist Garden Gnome (with Janet K. Lee), the AlphaOops series (with Bob Kolar), the Woodcutter Sisters fairy tale series, and The Dark-Hunter Companion (with Sherrilyn Kenyon). Her short fiction, essays, and poetry have appeared in a myriad of anthologies and magazines.

Born in Burlington, Vermont, Alethea currently lives and writes in Florida, on the Space Coast. She makes the best baklava you’ve ever tasted and sleeps with a teddy bear named Charlie.You can find Princess Alethea online at: www.aletheakontis.com.