I'm going to be mentoring a new YA writer through several rounds of her WIP. There's nothing that I love better than saving someone some of the long, flailing hours that I spent writing stories that had no point or purpose, so I'm very excited. We started last night by talking about the importance of boiling down the idea behind the book.


Starting with concept was probably the single biggest factor in getting me from aspiring author to published author. Understanding concept was equally as important. My first book was written in a frenzy of flowing words. So much fun. And so completely useless, because when I was done, I had a big fat mess that didn't go anywhere at all.

The idea behind the story, the concept, is critically important. It becomes:
So how do you boil down that idea? I have a little worksheet for that. I keep restating the idea in different ways, tweaking it until I have something that reaches the core. Here's the worksheet, and I've thrown in some examples from COMPULSION to help you see how they work.

[This was the first note I wrote to myself about the story idea. I've tweaked it a little bit, but ultimately, it made its way to the front of the book jacket.]

Two sentence idea:
After losing her mother and godfather, seventeen-year-old Barrie Watson is sent to live with her mother's twin on the family's 300-year-old low country plantation in South Caroline where her inheritance of the family gift for finding lost things and the dreamy boy across the river help her uncover a long-buried murder and a family feud that stems from two wishes and an ancient curse granted to the three founding families of the island by the mysterious spirit who, for a thousand years, has set the river on fire every night. But can Barrie find a way to break the compulsion that accompanies the magical bonds that hold her to the island, or will stirring up dark secrets trigger the curse and prove to be her downfall?

A seventeen-year-old girl discovers that her gift for finding lost things is equally a curse when she loses everything she's ever known and is plunged into first love and the dangerous secrets and dark history of the magical island settled three-hundred years ago by her ancestors.

What if a teen with an inherited gift for finding lost things is compelled to discover dangerous secrets her family has been hiding?

Compulsion starts when Barrie Watson arrives at her family's 300-year-old plantation and discovers that she is magically linked to the island so that she can't leave until she uncovers the secrets her family has been trying to hide.

Will Barrie's gift for finding lost things help her unravel the tangled secrets buried at Watson Island before the ancient curse comes into play and puts her life in danger?


Will Barrie find love and a new family when she has lost everything, including her sense of self?


One winner will receive everything pictured here, including the brand new PERSUASION trinket bookmark -- the first one I'm giving away. : ) 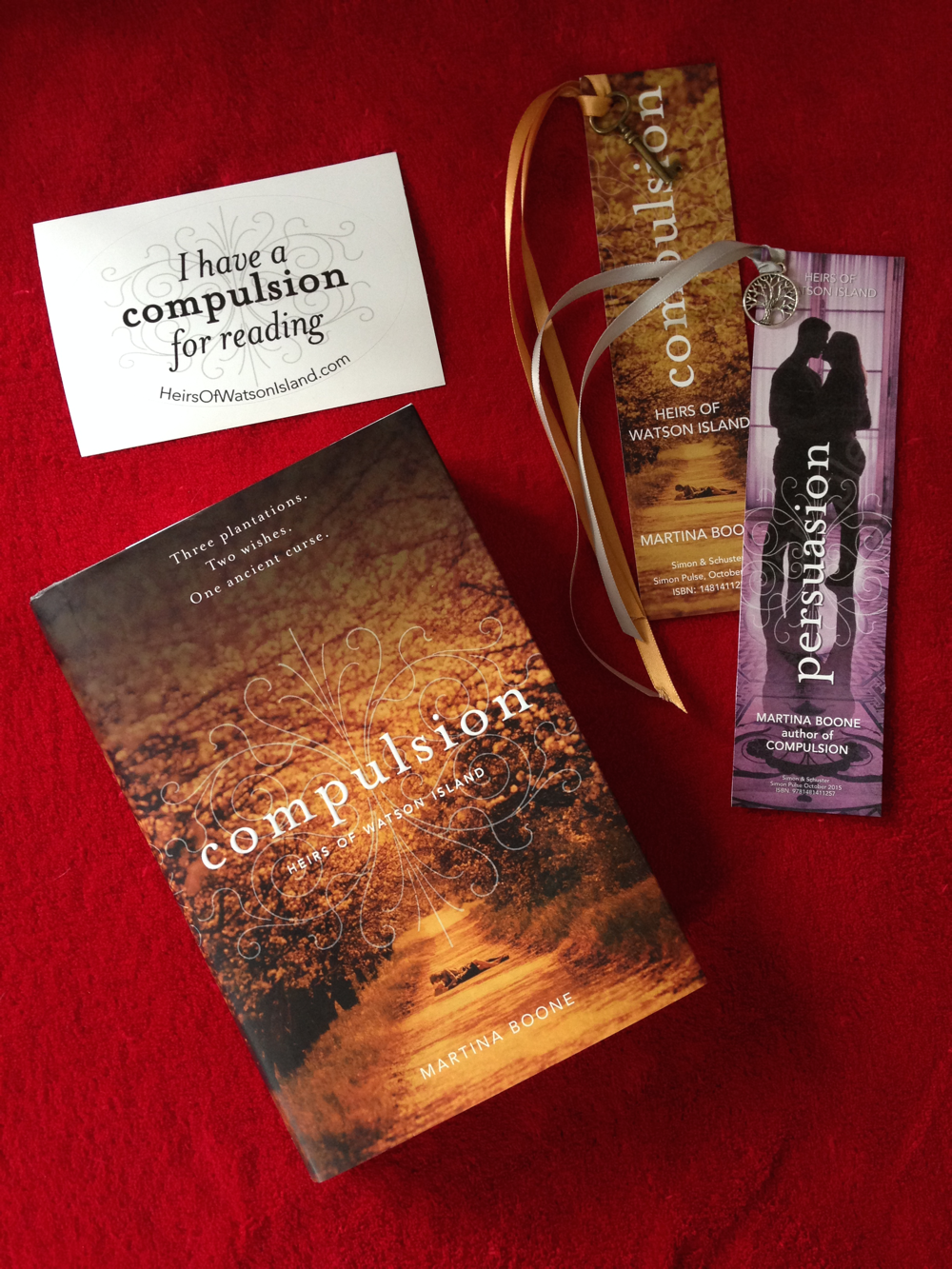