I am thrilled to welcome Mindee Arnett to the blog today. When I first started blogging and Tweeting, she was one of the first writers to welcome me in. Mindee is an incredibly talented and prolific writer, and I envy her ability to have 2 series going simultaneously. She's here today to share with us some of her secrets behind how she does it all. And I, for one, look forward to checking out the resources she recommends. Thank you, Mindee!


The last five books I wrote—The Nightmare Affair, Avalon, The Nightmare Dilemma, Polaris, and The Nightmare Charade—were all written in more or less the same way, using an approach I like to call a “pantser who stops for directions.” Basically, this means that I didn’t outline, but I also didn’t just rush through the first draft pell-mell. I took my time, contemplating events carefully along the way.

I’m happy with this approach. It works for me, and I’m sure to keep using it whenever I’m drafting. However, with my latest two projects I have made a turn toward the dark side. Yes, you heard me right. I have become an outliner.

But wait, let me qualify that statement lest my little pantser heart breaks—I have become an outliner out of necessity. With the conclusion of both of my series, my agent and I decided to submit my next projects on proposal. Now, what all a proposal entails varies by agent, writer, and editor, I believe, but for us it meant opening chapters plus a detailed outline. Given that I had never in my life written an outline, I had no idea what constituted a detailed outline, so my agent helpfully provided two examples and said, something in between would work. The first example was four pages, single-spaced. The second was 35 pages, double-spaced. Although both were helpful in their way, that made for an awfully large margin.

I knew I needed help. Normally, I don’t have a clue what’s going to happen in a book until I’ve written the first draft. That first draft is an outline. It’s a way for me to discover the story, spending hours and hours with the characters and the world. But now I needed a short cut, or at least a semblance of a shortcut. There really is no way to get the same depth of discovery in an outline that you’ll get in a draft. But that’s okay. For a proposal I just needed to get the bones. The flesh and heart and muscles of the story could come later.

I decided to check out a book my writer friend Kristina McBride had recommended to me months before—The Anatomy of Story: 22 Steps to Becoming a Master Storyteller by John Truby. One reason why I chose this book to help me write an outline is because it’s primarily focused on screenplays, and screenplays, it’s always seemed to me, are stories boiled down to their spine. Also, one of the tools I have relied upon in the past is specific to screenplays, too—Michael Hauge’s Six Stage Plot Structure. You can find all sorts of examples of this online. For my prior five books I used this plot structure as a road map to help me gauge where I was in the novel while drafting. It was particularly helpful with word counts. Most of my novels come in around 100k, so using the plot structure, I tried to make sure I hit that 50% mark, the “Point of No Return” at about 50k. But more on this Six Stage Plot Structure in a minute.

What I found in Truby’s book were techniques to help me think about my story as a whole and how to flesh out the key parts without doing any actual drafting. And those techniques did help, although they weren’t enough on their own. I ended up using the Six Point Plot Structure as well. But together the two tools were enough to help me generate a decent outline. What follows is a breakdown of the process I ended up using.


And there you have it. My process as it exists today. Maybe it’ll work for you and maybe it won’t. But no worries. Give me a few months and a few new projects and I’ll come up with a new process. That’s the coolest thing about writing—it never gets routine. Always be searching for a new approach.

Mindee Arnett is the author of two young adult series: The Arkwell Academy Series, a contemporary fantasy from Tor Teen (Macmillan), and Avalon, a sci-fi thriller from Balzer+Bray (HarperCollins). She has a Master of Arts in English literature with an emphasis in Creative Writing. She lives on a horse farm in Ohio with her husband, two kids, a couple of dogs, and an inappropriate number of cats. She’s addicted to jumping horses and telling tales of magic, the macabre, and outer space. Find her online at www.mindeearnett.com. 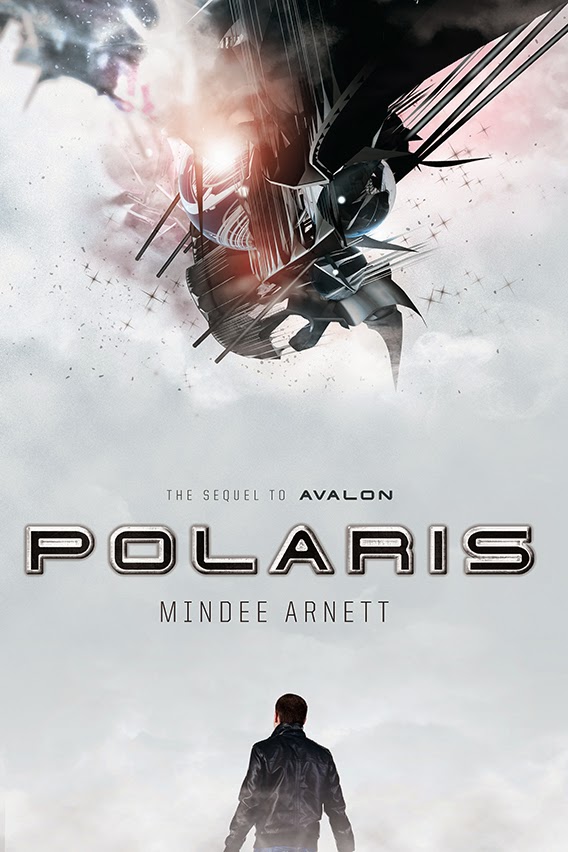 Jeth Seagrave and his crew are on the run. The ITA, still holding Jeth’s mother in a remote research lab, is now intent on acquiring the metatech secrets Jeth’s sister Cora carries inside her DNA, and Jeth is desperate to find the resources he needs to rescue his mother and start a new life outside the Confederation. But the ITA is just as desperate, and Jeth soon finds himself pursued by a mysterious figure hell-bent on capturing him and his crew—dead or alive.

With nowhere to run and only one play left, Jeth enters into a bargain with the last person he ever thought he’d see again: Daxton Price, the galaxy’s newest and most ruthless crime lord. Dax promises to help Jeth, but his help will only come at a price—a price that could mean sacrificing everything Jeth has fought for until now.

The conclusion to the story Mindee Arnett began in her acclaimed novel Avalon, Polaris is a dangerous journey into the spaces between power and corruption, life and death, the parts of ourselves we leave behind and the parts we struggle to hold on to.