Jane Casey, author of BET YOUR LIFE, on creating a harmonious piece out of different bits

There’s a series of scenes in the middle of BET YOUR LIFE involving a party, a violent fight, a long conversation between three characters and a kiss. They were all hugely challenging scenes to write because they are so different in tone but they had to flow on from one another. The conversation was the most demanding bit – any writer would rather have two people talking than three, just to cut down on the potential for confusion! And there are lots of undercurrents and tensions and people downright lying in the course of that conversation, so I worked very hard on it and wrote it a few times to make it all work. It’s got these really exciting high-octane scenes on either side and it could have dragged, but I aimed to make it just as exciting and compelling in a different way. A novel is kind of like a long piece of music – there are fast bits and slower bits and exciting bits and quiet bits and my job is to make it all into a harmonious piece that doesn’t seem as if it could be written any other way.

My original job was as a commissioning editor in a publishing house in London, specializing in YA, so actually writing YA is my dream, my indulgence and my great pleasure. I started writing crime novels for adults and they were successful enough for me to give up my job and write full time eventually. When I was supposed to be writing my second crime novel I was still working as an editor. I got hugely distracted by an idea I had for a paranormal romance. (It was 2009; there were a lot of them crossing my desk!) I wrote it – and it was not good. I couldn’t work out what was wrong with it, and anyway, I think it was unfixable. But when my agent sent it out, just to see what would happen*, it caught the attention of a couple of editors and one of them asked me if I’d write a YA crime novel. That was HOW TO FALL, the first in this series. This year I’ll have ten books in print, which is amazing, and only one novel didn’t find a home, but it worked hard for me anyway.
(*Do not do this. Never send out work if you’re unsure about it. I wasn’t depending on the paranormal romance; I had a book deal already and my first book was being published in lots of different languages so everything was looking good for me. My agent and I took a calculated risk in sending out the YA novel and it paid off remarkably well. But that book was not a good book and I knew it. The plot was nuts. My YA editor loved my adult books and that was the only reason she considered me as an author, once she knew I was interested in writing YA.)

Firstly, don’t allow yourself to be discouraged. There comes a point in every book when you think you can’t go on. Go on. You learn much more from a flawed but finished book than from a fragment. And you can always improve whatever you manage to write. Secondly, write! Do it every day. There are days I don’t write anything but I still try for an hour. There are days I write for several hours straight and don’t notice the time passing. If you commit to writing every day, you never have to make the decision to try to write – you just get on with it. It’s hard. Accept that. Do it anyway! 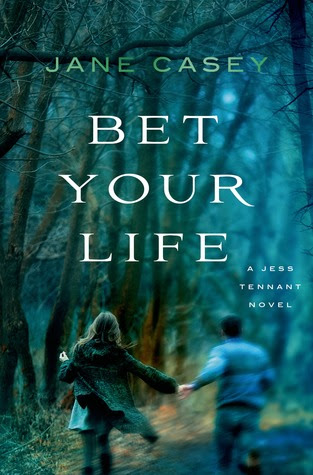 Jess Tennant has now been living in a tiny town on the English seaside for three months, and is just beginning to relax and think of it as home after the traumatic events of last summer. But in the small hours of Halloween night, a teenage boy is left for dead by the side of the road. Seb Dawson has a serious head injury and may not survive. Jess might not have liked Seb much, but surely he didn’t deserve this. The police don’t seem to be taking the attack very seriously, but Jess can’t just let it go, and she takes matters into her own hands.

As she investigates, Jess discovers that Seb was involved in some very dangerous games. A secret predator around girls, he would do whatever it took to abuse them, from lying and blackmail to spiking drinks. Could a group of vengeful victims be behind his attack? Or is there someone else with a grudge against Seb, who will stop at nothing to silence him? Jane Casey returns with another edge-of-your-seat mystery in Bet Your Life.

Born and brought up in Dublin, Jane Casey has been twice shortlisted for the Irish Crime Novel of the Year Award. She is the author of The Missing and two previous Maeve Kerrigan novels The Burning and The Reckoning.

Married to a criminal barrister, Jane lives in south-west London.

Jane has also written a Young Adult novel, How To Fall.