Eileen Cook, author of REMEMBER, on being inspired by scientific experiments

What was your inspiration for writing REMEMBER?

I’d read an article about some scientific experiments being done with memory. The scientists were looking for a way to reduce the difficulty war veterans have with Post-Traumatic Stress Disorder.  It occurred to me if people could get rid of very traumatic memories, there would also be a market for people who wanted to get rid of all sorts of memories.

I began to wonder what types of things might go wrong once you begin messing around with someone’s memory. It can be relatively easy to confuse what is a real memory from what someone might tell you happened. What if something you were sure was true, suddenly seemed to be uncertain, possibly a lie?

Once all these questions were swirling around in my head I knew I had a book- all I had to do is write it!

How long did you work on REMEMBER?

It takes me about a year to write a book, that includes time spent thinking about the idea before I even start writing. I find I work best when I give myself a chance to let a book sit for a period of time. When I do that the ideas really start to come.  I’m lucky in that I enjoy the actual writing process. I don’t have difficulty making myself sit down and get words on the page- for me that’s the fun part. It’s the idea formulation and revisions that can give me headaches.

I had confessed to a writing mentor that I was nervous about sending my work out and the rejection I knew would come. She told me “Eileen, you already aren’t published. The worst thing that will happen is that you still won’t be published.”  That’s when I got it- rejection isn’t fun, but it’s not life or death either. I realized I could survive hearing No, or someone telling me I was no good. What I couldn’t survive is knowing that I never took the chance.

Read. Read a lot. Books are the best teachers. If it is a book you like take it apart. Look at how the author told the story, whose point of view? What scenes did she include? Who are in those scenes? How does the story unfold? Writers are making choices all the time- you can learn from how they chose to tell the story what kind of options you might have to tell yours.

I am working on a new mystery that involves friendship, lies, some betrayal and Italy! 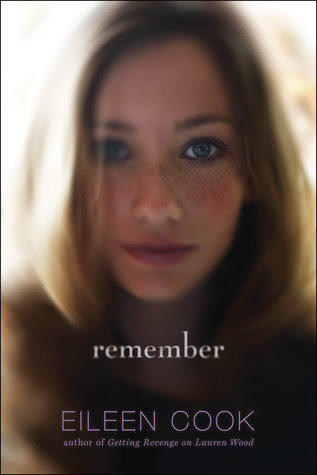 You can read more about Eileen, her books, and the things that strike her as funny at www.eileencook.com. Eileen lives in Vancouver with her husband and one very naughty dog and no longer wishes to be anyone or anywhere else.
Jocelyn Rish at 6:00 AM