What was your inspiration for writing ZOM-B BRIDE?

It was inspired by a dream scene in the very first book of the series – although, to be honest, I knew even at that stage that this book lay ahead of me, so perhaps it would be more accurate to say that the events of book 10 inspired that dream scene in book 1. While I didn’t know all the twists and turns of the main storyline when I started the series, this was one of the major arcs that I knew it would have to include. This is a key book, and one which answers a lot of questions, not least of which is why I chose to make my main character a girl as opposed to a boy...

I’ve been influenced by all sorts of books, and although my work tends to get sold under the horror banner, it’s a real mix of genres. Some of my recommendations, which I hope would appeal to fans of Zom-B, would include The Chocolate War by Robert Cormier, The Turbulent Term Of Tyke Tyler by Gene Kemp, The Stand by Stephen King, Bless The Beasts And Children by Glendon Swartout.

How long did you work on ZOM-B BRIDE?

I spent about three years at work on it, the same as I did on every other book in the series – but I juggled them around and worked on them at the same time, which is why I was able to release them so quickly.

It taught me that I’d never make a living as an author of romance novels!

What do you hope readers will take away from ZOM-B BRIDE?

I recently finished work on books 11 and 12 of the series (the last two books) and have written the first draft of what will hopefully be my next book after that. All I can say about it at the moment is that it won’t be a horror book, although it’s not a million miles removed from that field... 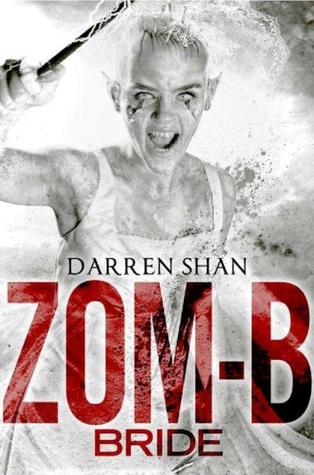 B Smith has been reunited with the murderous maniac clown, Mr. Dowling. To her shock and consternation, he's desperate to make B his partner in crime. Mr. Dowling disgusts her, but B thinks she can see a way to control him and maybe even save the world. But it will involve a sacrifice far greater and more surreal than any she has contemplated before...

Darren Shan is the pen name of the Irish author Darren O'Shaughnessy, as well as the name of the protagonist of his book series The Saga of Darren Shan, also known as The Cirque Du Freak Series in the United States. He is the author of The Demonata series, as well as some stand-alone books, and a series of books for adults under the alternative name of D.B. Shan.
Jocelyn Rish at 6:00 AM