Today we're excited to have Lisa Maxwell joining us after the recent cover reveal of her new novel GATHERING DEEP. Welcome Lisa!

Thanks so much for having me! I’m so excited to show off the gorgeously creepy new cover for my second book, GATHERING DEEP. I really love what my publisher has managed to do to capture the dark, lush atmosphere of New Orleans and the book!

Tell us a little about GATHERING DEEP. How is it related to your first book, SWEET UNREST?

GATHERING DEEP is part sequel, part companion novel. It picks up a couple of weeks after SWEET UNREST ends, but it’s told from another character’s POV.

In SWEET UNREST, Lucy Aimes is forced to move to Le Ciel Doux, a plantation outside of New Orleans, when her parents uproots her family from their life in Chicago. For as long as she can remember, Lucy has had strange, dark dreams about drowning, but when she moves South, the dreams get more vivid and intense. SWEET UNREST follows Lucy as she discovers the meaning of those dreams and figures out their connection to a mysterious boy she meets and fills inexplicably drawn to on the plantation where her family lives.

One of my favorite characters in SWEET UNREST was Chloe Sabourin, the daughter of the plantation’s business manager, who befriends Lucy and introduces her to the more mystical side of New Orleans. But by the end of the book, it’s revealed that Chloe more involved with the mystery Lucy finds herself in than anyone realizes at first.

GATHERING DEEP is Chloe’s book. After the final events unspool in SWEET UNREST, Chloe’s whole world has been turned upside down, and this book is about what happens next.

Will readers get to see more of Lucy and Alex in this new book?

Lucy plays a pretty big role in this book, but since this is really Chloe’s story, told from Chloe's POV, readers will get to meet a new cast of characters as well, including Mama Legba’s extended family.

What were the challenges of writing a sequel?

I’d always planned for SWEET UNREST to be part of a larger story, but the original version of that story had a rather different ending than the one that ended up in the book. So the sequel that I’d originally planned a few years back, way before SWEET UNREST sold, isn’t anything like the one I ended up writing. I basically had to go back to square one and rethink where the story was going to go.

The challenge was that I’d already planted hints and plot points for future stories in SWEET UNREST. By the time I started to write GATHERING DEEP, the first book was already finalized, so I had to rethink and re-purpose a lot of those for the new sequel.

But in a lot of ways, this being Chloe’s story has given me a little more freedom than I would have had if Lucy was my narrator again. Chloe has a totally different world view and set of experiences, and her story fits into that world, but it has a slightly different flavor.

What’s differences can readers expect between the two books?

Well, the biggest difference is that in SWEET UNREST Lucy has dreams that show her the past. Chloe isn’t Lucy, so she doesn’t have that access to the past in the same way. But for this world, what happened in the past is essential to the present, so Chloe has a different way of accessing that information.

What will readers of SWEET UNREST love about this new book?

I’m hoping they’ll find a lot to love! They’ll get to see more of Mama Legba and Lucy, and there’s even more of New Orleans in GATHERING DEEP. But I think my favorite part of the book is that they’ll get to learn more about the dark witch Thisbe.

If your readers haven’t had a chance to get SWEET UNREST, they can win a copy, plus a $20 gift card to the bookstore of their choice, by checking out the contest on iceybooks.com. 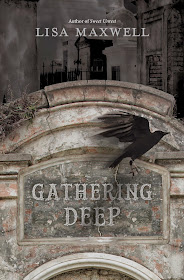 Connect with the author:

So, what do you think of the cover? Let us know in the comments below!
Jocelyn Rish at 6:00 AM