J.R. Johansson, author of CUT ME FREE, on being inspired by two vastly different concepts

What was your inspiration for writing CUT ME FREE?

My inspiration for CUT ME FREE was a very organic thing. I was in a writing group where they were joking around and challenged me to write something that featured a creepy puppet. While pondering how to do that in a way that hadn't already been done to death, I came across information on child trafficking and child abuse and how easy it is not to see it even when it is right in front of you. The true stories I was reading were absolutely horrifying and I think they changed me in some ways. They really stuck with me and opened my eyes. Anyway, somehow these two vastly different concepts floated around in my brain until one day they ran into each other and the foundation of CUT ME FREE came to life.

There were so many difficult scenes to write in CUT ME FREE. It's not an easy book. This is a book that seems pretty polarizing. Some people love it and others can't handle it. I didn't gloss it over or make it seem less awful than it would be. It was important to me that this deal honestly with what the recovery of a victim looks like. It's a daily struggle and I wanted to be true to that. One scene that was very emotionally difficult for me to write was a scene a bit over halfway through where Charlotte/Piper is terrified and she's decided to run again. She is walking down the street in the middle of the night and she looks around herself and finally sees what she is doing. She sees that her life has become a series of times where she flees one situation after another. She sees how it is hurting the people she cares about and she decides that she needs to change things. It's a moment that is both scary and empowering. The emotional strength she required to make that decision was difficult to capture, but now that it's done, I love it and I'm very proud of it.

Thanks for asking! I'm currently working on a standalone contemporary thriller that will be released with Macmillan in the fall of 2016. We're doing revisions on it and getting it all shiny, which is my favorite part of the creative process. I'm also starting to prepare the next project which I think might be going back in the direction of a series and introduce fantastical elements of some sort again. More to come on that soon! 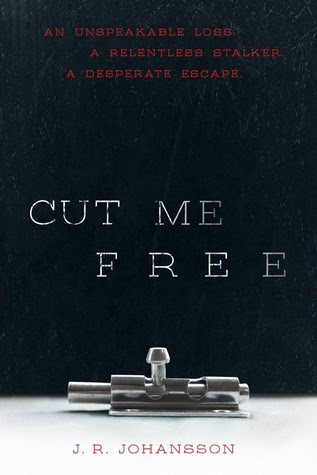 Seventeen-year-old Charlotte barely escaped from her abusive parents. Her little brother, Sam, wasn't as lucky. Now she's trying to begin the new life she always dreamed of for them, but never thought she'd have to experience alone. She's hired a techie-genius with a knack for forgery to remove the last ties to her old life. But while she can erase her former identity, she can’t rid herself of the memories. And her troubled history won’t let her ignore the little girl she sees one day in the park. The girl with the bruises and burn marks.

That’s when Charlotte begins to receive the messages. Threatening notes left in her apartment--without a trace of entry. And they’re addressed to Piper, her old name. As the messages grow in frequency, she doesn’t just need to uncover who is leaving them; she needs to stop whoever it is before anyone else she loves ends up dead.

J.R. JOHANSSON has a B.S. degree in public relations and a background in marketing. She credits her abnormal psychology minor with inspiring many of her characters. When she's not writing, she loves reading, playing board games, and sitting in her hot tub. Her dream is that someday she can do all three at the same time. She has two young sons and a wonderful husband. In fact, other than her cat, Cleo, she's nearly drowning in testosterone. J.R. lives in a valley between majestic mountains and a beautiful lake where the sun shines over 300 days per year.