Writers, Practice Putting Yourself Out There! A WOW Wednesday Post by Amy DeLuca

Special treat for you today, guys! Amy DeLuca is here to talk about dipping your toe into public critiques and contests--which is pretty much a gateway drug to all the skills you'll need to survive the publication process. Her insight is a great blueprint, so take notes! And get out there in 2015! Remember, our FREE First Five Pages Workshop is another great place to start--and you'll get advice and input from three authors and an agent on three rounds of your manuscript! : )

PRACTICE PUTTING YOURSELF OUT THERE

Romance Writers of America (RWA) has just opened up its 2015 Golden Heart contest, the most prestigious writing contest for romance writers (including YA) in the country—some say worldwide, as entries are accepted internationally.

It’s a little sad for me this year, because now that I’m published, I’m no longer eligible to enter, and I know what I’ll be missing. I was fortunate enough to have been selected as a finalist in the Young Adult division in 2013 and 2014, and it was an experience that changed my life.

Can you imagine entering that contest—any contest—or does the thought cause your belly to bottom out? Putting your work out there to be judged by other authors, by agents and editors, is a scary prospect. A few years ago, I couldn’t even imagine doing such a thing.

I started writing my first Golden Heart finalist novel, HIDDEN DEEP, in 2010… and told no one. Not even my husband, who works nights. My kids would go to bed at nine, hubby would be at work anchoring the news, and I’d bang away at the keyboard until midnight. He’d come home and ask what I’d been doing with my evening, and I’d give some non-committal answer—“Oh, not too much.” I was passionate to the point of obsession about what I was doing, but terrified for another human being, even one who’d sworn before God and man to love me forever no matter what, to see what I’d written.

But after six months of nightly writing, I wanted that completed novel to go beyond me. I wanted to share it with others, and yes, to see it published someday and share it with the world. So I finally outed myself to my husband (who didn’t laugh at me, even once) and began researching the business of publishing.

I discovered author blogs with helpful posts for new writers and began to learn how much I had still to learn about the craft of writing. I also discovered the opportunity to share my first page for public critique on the Dear Author blog. http://dearauthor.com/first-page-entry-form/

Putting that first page up for public scrutiny was exactly like starting out as a rookie TV news anchor/reporter when I was twenty years old. I had to run to the ladies room (or nearest trashcan, bush, etc.) and throw up before going on the air live. Every. Single. Time. For weeks. I threw up in front of the governor of Mississippi one minute before interviewing him for a noon live shot.
Governor Mabus was very understanding, and I lived through the first page critique as well. I may have needed an adult beverage before reading through the feedback, but I survived. And then I wanted more. Because as much as I loved my manuscript, I knew that I wasn’t the most objective judge of its quality, and I’d need a heck of a lot more than a good first page to get an agent.

So I started researching writing contests and discovered RWA Chapter contests. Author Stephie Smith has a detailed and continually updated listing of them (and other contests) on her site. http://www.stephiesmith.com/contests.html

I didn’t know any other writers at the time, so entering these contests was a way to get feedback on my first 30 to 50 pages and synopsis from knowledgeable judges as well as get my writing in front of agents and editors if I was lucky enough to be a finalist. That book did end up finaling in several contests in 2012, which led me to attend my first writing conference and then another, where I had a chance to pitch my work to agents and met my amazing critique partner and so many other writer friends.

I’ve realized that writing for publication is a series of baby steps toward putting yourself out there. At each step you subject your writing to the judgment of others, which is not always pleasant—sometimes you have to run for the ladies room—but just like any other new thing we try, it gets easier and easier with practice. And with each new step, we grow.

Those chapter contest successes gave me the courage to enter HIDDEN DEEP in the 2013 Golden Heart contest. Getting to know my amazing fellow finalists and attending the national conference was the most valuable thing that’s ever happened in my writing life. Now I’m a member of an incredibly supportive community and have many people to turn to for feedback. They helped me improve my writing to the point that I signed with an agent this year, and my 2014 GH finalist young adult book is now out on submission. One of the best parts—my critique partner McCall Hoyle and I finaled together this year, and she won the 2014 Golden Heart!

Now that I’m published (under my pen name) in contemporary romance, there’s a whole new level of being “out there.” Nothing feels more vulnerable than having your hard work judged by readers—they may love it or hate it—and you have absolutely control over their opinions and how and where they share them.

If I hadn’t taken the baby steps all along the way—if I’d just put the first draft of that first beloved book out there—it might have done me in. One bad review would have probably made me quit writing altogether. But through practice and gradually increasing levels of exposure, I’ve come to trust my own writing and my ability to handle others’ evaluations of it. And I haven’t made a dash for the ladies room in years. 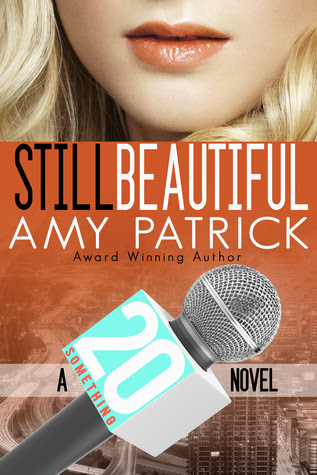 20 year old double-engineering major Cinda Moran is the smart one. Her older sister Kenley… is the pretty one. Their nightmare match-making mom has always made their roles pretty clear, and it’s no mystery which daughter she prefers. So while Kenley played the passive dress-up doll, Cinda did the opposite, refusing any attempts to prettify her and make her into “billionaire bait”. Instead, she’s fiercely focused on academics and her internship at an Atlanta TV station.

And as far as romance goes—please—she’s not even sure true love is a “thing”. As she does for everything else in her life, Trekkie-girl Cinda’s got a logical plan: select a sensible mate, come to a mutually satisfactory agreement, and decide to stick it out for better or worse.

Then she meets Blake Branham. He makes no sense for her at all. He’s a reporter at the station, years older, and has ambitions to work at the network someday while she intends to stay put in Atlanta. Even worse—he’s a total alpha. With her own Mr. Spock personality, the last thing she needs in her life is a swaggering Captain Kirk taking stupid risks and tempting her to do the same.

And he is tempting. When she’s forced to work closely with Blake on live shots and gets to know him outside the station as well, Cinda feels things she’s never felt for another guy and starts to wonder… should she boldly go where she’s never gone before? Should she give love a chance… even if it’s not logical?

Amy is a two-time Golden Heart finalist (2013 and 2014) who writes Young Adult fiction as Amy DeLuca and Contemporary and Fantasy romance as Amy Patrick. Her books have won and finaled in many RWA chapter contests, and she is the author of the 20 SOMETHING series. She lives in Rhode Island with her husband and two sons and actually craves the heat and humidity of Mississippi, where she grew up. She's been a professional singer and news anchor and currently narrates audio books as well as working as a station host for a Boston TV station.