Jessie Humphries, author of RESISTING RUBY ROSE, on knowing when to move on to a new story

What is your favorite thing about RESISTING RUBY ROSE?

The shower scene! Haha, that sounds scandalous, doesn’t it? I write YA after all. But for srsly, there are two things you can expect out of any Ruby Rose book: 1) kissing; and 2) killing. Which one do you think happens in the “shower scene?” Mwahahaha…

Do you want a more serious answer now? Okay, good. I’m really excited to introduce a few new characters into Ruby’s world. Especially this one hot male character with a British accent and impeccable taste in shoes. Enough said? I think so.

What was your inspiration for writing RESISTING RUBY ROSE?


Jason Bourne, Homeland, Heist Society, Dexter (and chocolate).
In all these stories, the characters grow, evolve, sometimes devolve, and surprise us. In the sequel to KILLING RUBY ROSE, I wanted Ruby Rose to live on, face new challenges, and surprise.

This book was my 2013 NaNoWriMo book (National Novel Writing Month-where you commit to write 50,000 words in one month). Though I had already meticulously plotted out the story in a “Beat Sheet” (the method taught in the SAVE THE CAT writing books), I shocked myself that I could write a story so fast and seamlessly. I attest this victory to three things: 1) A large bulk of it was written at a writer’s retreat in Park City, Utah wherein a great deal of hot-tub-brainstorming took place; 2) I already knew Ruby and the world she lived in; and 3) I didn’t do it alone—I have two amazing writing partners and three talented editors at my pub house. In summary, writing a sequel doesn’t suck at all! (As long as there’s a hot tub involved).

Yes, why yes, I did. I was at a writer’s conference in 2012 where agent Sara Crowe was speaking about the state of the industry and a few exciting books which she had recently sold. It occurred to me that the books she was describing weren’t anything like the book I was querying. Her words bounced through the echo chambers of my mind until something connected with something in my gut. I had been feeling like I needed to move on from the same story I’d been writing and rewriting for over two years. (Technically, I’d written two separate books with the same basic magic system and setting, but whatevs). I NEEDED TO MOVE ON! Sometimes letting go of the “story of your heart” NEEDS TO HAPPEN.

My AHA! moment was this: I knew I had to write a NEW story. One I felt passionate about, but also one an agent can sell. I KNOW THIS SUBJECT CAN BE CONTROVERSIAL. So let me be clear, I’m not saying, “write to the trends.” At all. I’m saying, “If publication matters to you, it would behoove you to know what the publishers want/don’t want to maximize your chances of representation and acquisition.”

So I dropped my paranormal story and I wrote a contemporary thriller, inspired by stories I loved. I felt refreshed with new characters, a different world, and a clean palate. It wasn’t long after that I landed one of the best-selling agents in the YA market (Sarah Davies) and she sold KILLING RUBY ROSE in a two-book deal. Sooo…it worked out pretty well ☺ Just sayin’. 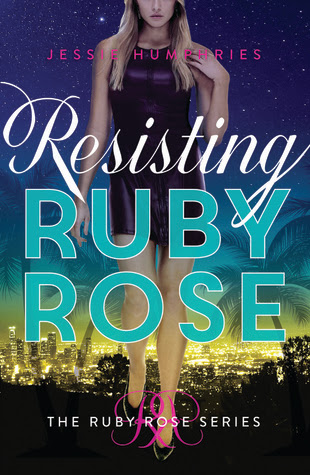 Still reeling from the heartbreaking events that unfolded on Grissom Island, Ruby Rose is trying to come to terms with the fact that she’s gone from a vigilante in killer shoes to a stone-cold killer. Everyone from her therapist to her smoking-hot boyfriend keeps trying to convince her that she hasn’t crossed over to the dark side, but Ruby isn’t so sure. It doesn’t help that her nemesis, Detective “Mastermind” Martinez, is still out there, waiting for another chance to take her down.

When an alleged CIA agent named Skryker shows up and asks for a meeting, Ruby figures it just means more questions about her case. But he has information of an entirely different nature and a job offer: join an elite force of young assassins, including Skryker’s right-hand guy, Quinn Donovan. Quinn is distractingly charming, handsome—and deadly. Ruby resists becoming a killer again, but as she becomes more ensnared in a web of deceit, no one around her is safe.

Jessie Humphries is the bestselling author of the YA thriller Killing Ruby Rose, the first book in the Ruby Rose series. In addition to writing, she is a part-time attorney and a mother. She lives in Las Vegas with her husband and four children.