Opening the Door to Failure and Starting the Path to Success

I cringe to think about that now, because I imagine what I could have learned in that time. . . . Where would my writing career be now? I look at the young writers starting out, and I’m envious of all the years they have left to hone their craft.

So why did I quit?

But there’s a bigger truth.

I was scared and discouraged and tired to my soul of being rejected.

I didn’t realize that failure was an opportunity.

As writers, as artists, we need failure to enable growth. If we don’t fail, we keep writing the same thing that everyone else is writing, which is great if we want to write fan fiction. But if we want to earn a place on bookstore shelves and in the hearts of readers, we have to write something that only we could write.

Writing something unique is scary. It opens us up to even more failure and rejection—a different kind of rejection, the kind that doesn’t have the safety net that comes with subconsciously knowing we’ve held a little something back and protected ourselves at least a little bit. Fear is what holds us back

But fear can also push us to a breakthrough.

The breakthrough that finally got Compulsion published came from fear. I had amassed a list of about ten agents who, while rejecting a previous manuscript, had asked to see more work. Writing Compulsion, I had already pushed myself further than ever before. I wrote a southern gothic paranormal romance when I knew that paranormals weren’t really what agents were looking for anymore. I wrote bigger than life characters, knowing that some people wouldn't get them. I wrote a heroine who makes lots of mistakes, knowing some people wouldn't identify with her. I tackled a huge story. I scared myself writing this book. And I fell in love with it, with every single aspect of it. When it came time to start thinking about querying it, fear that others wouldn't love it the way I did kept me staring at my lists instead of typing up the query letter.

At that moment, it wasn’t just the fear of rejection that held me back. I had finally learned enough about writing a novel to know how far I still had to go in mastering my craft. I feared that I hadn't done justice to the characters and the story. I feared losing the opportunities I had built with the agents who had asked to see additional work.

I needed a safety net of expert opinion.

I considered doing a mentorship. Cynthia Leitich Smith, one of my writing heroes, offers a mentorship for several months, as do other writers. Ultimately, I opted to hire a private editor to look at overall structure. For me, that didn’t work out. The changes she suggested were minimal, but they didn’t resonate, but because I didn’t really trust myself, I implemented them anyway. Every one of those was ultimately taken out in the editorial process.

Next, I looked for a workshop that was intensive and craft-oriented. I found one called Your Best Book through Free Expressions Seminars and Literary Services. The timing, price, and duration were right. It was a week-long, craft-based program mentored by Lorin Oberweger (half of the Noelle August of Lorin and Veronica Rossi who wrote Boomerang), Brenda Windberg, Emma Dryden (former Vice President and Publisher of Atheneum Books for Young Readers and Margaret K. McElderry Books, imprints of Simon & Schuster), and literary agents Josh and Tracey Adams. Not only did they all provide brilliant suggestions and insights over the course of the week, but the caliber of writers attending the program was truly stellar. These were writers who knew their craft and were looking to push themselves further. Many were already published, or agented and on the point of publication. Working with them opened my eyes and showed me how much talent agents and editors see every day. That was both daunting and exhilarating.

I took my manuscript home, incorporated the suggestions I’d received and carried them through the rest of the manuscript. I sent off my queries with a sense of calm assurance. I knew this manuscript was going to be “the one.”

Of course, that assurance disintegrated as the querying process drew out. I got to the point where I convinced myself it wasn’t going to work after all, and decided maybe I needed to do another round of revision. But right at that exact moment, I got the first email from an agent wanting to schedule “the call.”

I ended up getting multiple offers of representation for Compulsion, and then interest from multiple publishers that resulted in a pre-empt from Simon Pulse. I couldn’t have landed with a better publisher, and I’m a firm believer that everything that happened along my journey needed to happen to bring me to this point.

All we can do is learn our craft, study what others have written, read what publishers are publishing AT THAT MOMENT, and write the best version of a manuscript that only we can write.

Once we’ve done that, we send it out. We hope it finds a home, and if it doesn’t, we write the next manuscript. That previous book will still be there, waiting for us to look at again after the next is published.

Tell yourself instead that everyone fails. Tell yourself you’re going to embrace failure as a badge of honor, as a mark of courage.

Feed your compulsion to write.

And if you’re writing and you’re struggling, I’m sending you an enormous hug. Keep going. It’s worth it.

Compulsion hits stores in less than a week. I had my first school visit a week ago. 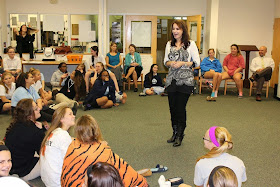 And my first book signing on Thursday. While I was there, I got to open the package with my first finished copy of my book. An actual, really-truly, never-thought-it-could-happen book. 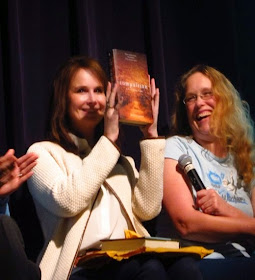 Best feeling EVER, especially when the road has been so long.

It can happen. It will happen.

Want to win the Free Expressions gift certificate or critique from Lorin Oberweger, or a critique from Kent D. Wolf, my agent, or critiques from other agents, and tons of other gifts and prizes?

Go to the Compulsion for Writing Party and Prize Fest page NOW and tell us any of the following: