Michael Grant, author of BZRK APOCALYPSE, on excessive homework in high school, and why you may not want to see close up pictures of the human tongue.

What is your favorite thing about BZRK APOCALYPSE?

The whole denouement pivots on an aspect of nanotechnology that I had not thought of until I reached the third book.  It was a very cool insight to me, realizing that nanobots could be used to inflict astounding destruction in a whole new way.  Obviously I’m trying to avoid spoilers here.  The best thing for me in terms of the whole series is that I can say with some confidence that no one has read anything quite like BZRK before, certainly not in Young Adult.  BZRK is not another. . . fill in the blanks.  BZRK is BZRK.  BZRK: Apocalypse is me carrying the series’  premise to its extreme.

Bed bugs and obsessive compulsive disorder.  I only have a touch of OCD, but it runs strong in my family.  The research on this series was far and away the most disturbing preparation I’ve ever done.  I spent hours looking at scanning electron microscope pictures of everything from mites to neurons to blood cells, fungi, bacteria, viruses, pollen, every kind of human tissue.  And for me at least it’s kind of nightmarish stuff.  After you’ve spent some time with high magnifications or SEM’s of a human tongue with helpfully colorized bacteria, you hesitate just a bit before kissing your wife.
How long did you work on the book?

About six months.
How long or hard was your road to publication? How many books did you write before this one, and how many never got published?

I sort of snuck in the back door of publishing.  My wife and I wrote a Harlequin romance.  It was. . . well, it got published, which was the point.  Probably not going to be squeezed onto the shelf between Faulkner and Fitzgerald.  From there we started ghostwriting, then moved onto our own series, most notably Animorphs.  But for the early period I was writing with my wife.  Now I write alone.

As of this writing I live in Tiburon, California, and am renting a house with a stunning view of San Francisco harbor.  So I go out on my deck where I have a rocking chair, I have a black coffee with me, and a cigar, and then I screw around on the internet for an hour until I finally force myself to actually get to work.  I’m a bit more self-disciplined than I was doing homework back in school, but not much more.  I do sometimes listen to music on my iPhone: Rancid, Offspring, Stones, Against Me, Shot Baker, Methadones.  Mostly punk, some reggae, some blues.
What advice would you most like to pass along to other writers?

Aspiring writers or fellow published writers? For the latter group I’d say: get a publishing lawyer, even if you have an agent.  For aspiring writers, I guess I’d say, look, the whole world is conspiring to destroy the one thing you absolutely need to become a writer:  your imagination.  Don’t let that happen. Also, have a life.  I really dislike the way high schools and even middle schools are relentlessly piling pressure on kids.  I think it’s obscene to have a kid put in 7 hours at school, plus 3 hours of homework, plus you need extracurriculars and charity to impress some elite college.  Just absurd and destructive, all in service to some credential.  Education is treated as an endurance event and a sprint all at once.  Kids need to have lives.  They need some slack in there somewhere.

I have the final pass on THE TATTOOED HEART, A MESSENGER OF FEAR BOOK in my in-box, and I’m about 2/3 done with SOLDIER GIRL, a new series. 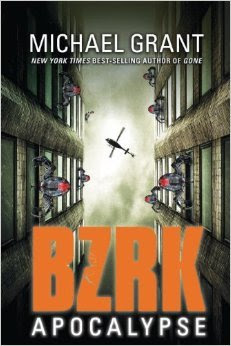 The staggering conclusion to the BZRK trilogy, from the author of GONE. The members of BZRK are preparing for their final stand, in the world's capitals and in the nano. Expect the unexpected in this novel packed with the author's trademark jaw-dropping action, violence, and pace.

Michael Grant has always been fast-paced. He’s lived in almost 50 different homes in 14 US states, and moved in with his wife, Katherine Applegate, after knowing her for less than 24 hours. His long list of previous occupations includes: law librarian, cartoonist, bowling alley mechanic, restaurant reviewer, waiter, documentary film producer and political media consultant.

Grant and Applegate have co-authored more than 100 books, including the massive hit series Animorphs. Grant went on to write The New York Times and international bestselling series, GONE. His BZRK series takes participants on a roller-coaster ride across print and digital venues.
Adventures in YA Publishing at 6:00 AM