Karen Akins, author of Loop, on writing during nap time

What is your favorite thing about LOOP?

LOOP is about a twenty-third century time traveler named Bree who meets a boy from the past who is already in love with her future self and is keeping his own set of secrets. One of the things I love most about the story is that Finn (the boy) refuses to give up on Bree even when she's almost at the point of giving up on herself. He loves her even when she's unloveable, and that makes it a very hopeful story.


I fell asleep while watching my husband play a video game that had all sorts of grappling hooks and explosions. It triggered a vivid, fun, action-filled dream, and right before I woke up, I dreamt the twist that this guy fell in love with a time-traveler's future self. I grabbed a notebook and started scribbling ideas. It was the first time that I'd ever thought, "This could be the one."

I started writing it in 2010, and approved my first pass pages just a few months ago so...a long time. I wasn't working strictly on LOOP that entire time, though. I was also writing and revising TWIST, its sequel.

Before I had my second child, I would write while my older son was in preschool, usually at a coffee shop or the library. Now that I have two (one of whom is a toddler), I squeeze in writing during naps and after they go to bed. I'm also blessed to have a very supportive husband, so I'm able to get away from the house when I'm on a pressing deadline.

I know everyone says it, but KEEP WRITING. One of my favorite writing quotes is from C.S. Lewis:

"What you want is practice, practice, practice. It doesn’t matter what we write (at least this is my view) at our age, so long as we write continually as well as we can. I feel that every time I write a page either of prose or of verse, with real effort, even if it’s thrown into the fire the next minute, I am so much further on." 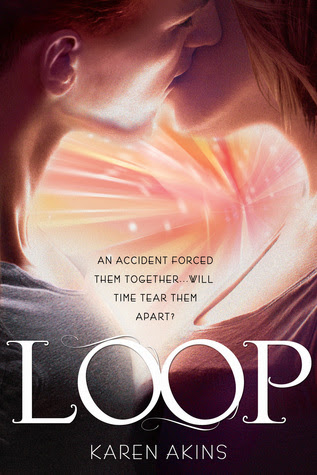 At a school where Quantum Paradox 101 is a required course and history field trips are literal, sixteen year-old time traveler Bree Bennis excels…at screwing up.

After Bree botches a solo midterm to the 21st century by accidentally taking a boy hostage (a teensy snafu), she stands to lose her scholarship. But when Bree sneaks back to talk the kid into keeping his yap shut, she doesn’t go back far enough. The boy, Finn, now three years older and hot as a solar flare, is convinced he’s in love with Bree, or rather, a future version of her that doesn’t think he’s a complete pain in the arse. To make matters worse, she inadvertently transports him back to the 23rd century with her.

Once home, Bree discovers that a recent rash of accidents at her school are anything but accidental. Someone is attacking time travelers. As Bree and her temporal tagalong uncover seemingly unconnected clues—a broken bracelet, a missing data file, the art heist of the millennium—that lead to the person responsible, she alone has the knowledge to piece the puzzle together. Knowledge only one other person has. Her future self.

But when those closest to her become the next victims, Bree realizes the attacker is willing to do anything to stop her. In the past, present, or future.

Karen Akins lives in the MidSouth where she writes humorous, light YA sci-fi. When not writing or reading, she loves lightsaber dueling with her two sons and forcing her husband to watch BBC shows with her.

Karen has been many things in her life: an archery instructor, drummer for the shortest-lived garage band in history, and a shockingly bad tic-tac-toe player.