What is your favorite thing about UNMARKED?

The Legion Series is a mix of different topics I love to write about—a group of very different teens who have to come together to fight the ultimate evil, secret societies, the paranormal, superstitions, and hot identical twin brothers. In Unbreakable, I introduced the world, the characters, and the dynamics between them. Unmarked allowed me to play with them, and push them to their limits. Unmarked revisits some of the elements readers loved most from the first novel—Priest’s gadgets and Alara’s sass—and answers questions about Kennedy’s past. Of course, it also raises new ones about the future of the Legion—and the world. It takes everything to the next level, including the romance.

It takes me roughly four months to draft a solo book. But Unmarked took much longer because I stopped halfway through to work on the Dangerous Creatures e-novella, Dangerous Dream, and the outline and editing for Dangerous Creatures. I try to draft as quickly as possible so I don’t second-guess myself constantly. I save that for revisions.

My writing partner, Margaret Stohl, and I actually wrote Beautiful Creatures on a dare from seven teens in my fantasy book club, including Margie’s two oldest daughters and my sister. We didn’t write it with the intention of publishing it. Our grand plan was to upload the finished version onto a website. Clearly, we didn’t know much about traditional or self-publishing. One of Margie’s oldest friends read the draft and sent it to his agent without telling us. A few months later, our agent sent the book out and sold it. We were lucky, but I also think we took a lot of risks with the story because we didn’t plan to publish it.


What’s your writing ritual like? Do you listen to music? Work at home or at a coffee shop or the library, etc.?

Basically, I need three things to write: my laptop, giant noise-cancelling headphones, and Diet Coke. I love listening to music before and after I write because it helps set the tone for a scene, or sometimes music functions like a theme song for one of my characters. For example, whenever I write Sarafine scenes for a Beautiful Creatures novel, I listen to AC/DC’s Hells Bells. Margie probably listens to something totally different. While I’m writing, I wear noise-cancelling headphones so I can hear the characters talking. It’s sort of like a movie playing out in my mind. The biggest problem with my mental movie is that I can’t type, and my hands can’t keep up with what’s going on in my head. I do have a slightly frightening technique that involves typing with three fingers. But lately, I’ve been writing longhand, and my lovely assistant types it for me afterward.

I’m about to go on tour for Unmarked, the second book in the Legion Series. I’m also working on proposals for two new writing projects, which involves a lot of pacing and thinking—with a little writing thrown in. If I told you any more than that, I’d have to kill you (in a book). 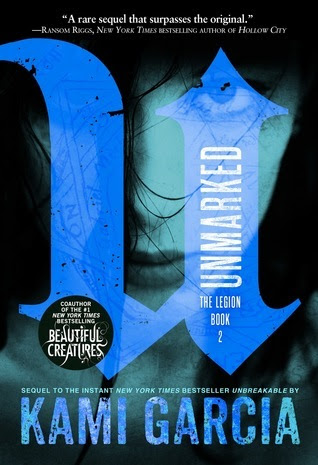 Now Kennedy and the other Legion members-Alara, Priest, Lukas, and Jared-have to hunt him down. As they learn more about the history of the Legion and the Illuminati, Kennedy realizes that the greatest mystery of all does not belong to any secret order, but to her own family. With the clock ticking and the life of someone she loves hanging in the balance, Kennedy has to ask the question she fears most: what is it about her past that has left her Unmarked? Purchase Unmarked at Amazon Purchase Unmarked at IndieBound View Unmarked on Goodreads

Kami is also the author of Unbreakable, the first book her paranormal solo series, THE LEGION (coming October 1, 2013.

Kami grew up outside of Washington DC, wore lots of black, and spent hours writing poetry in spiral notebooks. As a girl with Southern roots, she has always been fascinated by the paranormal and believes in lots of things “normal” people don’t. She’s very superstitious and would never sleep in a room with the number “13? on the door. When she is not writing, Kami can usually be found watching disaster movies, listening to Soundgarden, or drinking Diet Coke.

Kami has an MA in education, and taught in the Washington DC area until she moved to Los Angeles, where she was a teacher & Reading Specialist for 14 years. In addition to teaching, Kami was a professional artist and led fantasy book groups for children and teens. She lives in Los Angeles with her husband, son, daughter, and their dogs Spike and Oz (named after characters from Buffy the Vampire Slayer).

Learn more about Kami and her books at www.KamiGarcia.com & www.TheLegionSeries.com and follow her on Twitter: @kamigarcia.
Unknown at 6:00 AM