Cinda Chima, author of THE SORCERER HEIR, on learning how to write a novel

Author Question: What is your favorite thing about THE SORCERER HEIR?


The Sorcerer Heir is the final novel in a series of five contemporary fantasies revolving around five magical guilds: Warriors, Wizards, Seers, Enchanters, and Sorcerers. In this novel I was able to clear up the trouble I made for my characters in The Sorcerer Heir as well as giving two deserving minor characters some major stage time. I also got to change up the magical system a little. An appropriate tagline for these last two installments would be: This is what happens when magic goes mutant.

What was your inspiration for writing THE SORCERER HEIR?

1. The prospect of having to give my advance back.

2. The opportunity to bring closure to a number of characters that readers had bonded with. There's also a strong musical element in these stories: the characters are all magical misfits who formed a band and that pretty much describes my teen life.

What did this book teach you about writing or about yourself?
Somebody once said that you never learn how to write a novel until it's finished. And then it starts all over with the next one. There's truth in that--it's not like once you get the hang of this thing it's easy. But what you do have is the memory of succeeding at it before. And that's very encouraging.

What advice would you most like to pass along to other writers?
Writing well is the very best thing you can do to promote your novel. I see too many writers attending sessions on writing a query letter or pitching agents before they have a project completed. Trying to shop a bad book is like trying to roll a boulder uphill--it's a lot of work with very little return. The Sorcerer Heir is my ninth published novel, and I am still learning how to write.

What are you working on now?
I've signed on to write four more fantasy novels set in the Seven Realms, my high fantasy world. I'm revising the first of those, scheduled for release in spring, 2016. 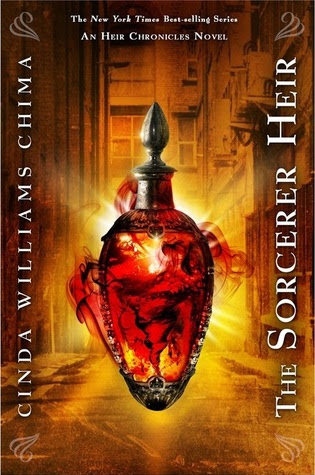 The delicate peace between Wizards and the underguilds (Warriors, Seers, Enchanters, and Sorcerers) still holds by the thinnest of threads, but powerful forces inside and outside the guilds threaten to sever it completely.

Emma and Jonah are at the center of it all. Brought together by their shared history, mutual attraction, and a belief in the magic of music, they now stand to be torn apart by new wounds and old betrayals. As they struggle to rebuild their trust in each other, Emma and Jonah must also find a way to clear their names as the prime suspects in a series of vicious murders. It seems more and more likely that the answers they need lie buried in the tragedies of the past. The question is whether they can survive long enough to unearth them.

Old friends and foes return as new threats arise in this stunning and revelatory conclusion to the beloved and bestselling Heir Chronicles series.


Praise for The Heir Chronicles:
The Warrior Heir
*"Chima offers a pitch-perfect blend of high fantasy and small-town reality..." -The Bulletin of the Center for Children's Books (starred review)

* "Chima uses her pen like a wand and crafts a wonderfully rich web of magic, while thankfully leaving some dangling threads for subsequent tales." -VOYA (starred review)

"Chima is a talented storyteller...a strong choice for teens seeking a rousing read." -The Cleveland Plain-Dealer

"Chima continues to excel at building tension and populating her well-told tales with new and returning characters we want to know better." -Booklist


New York Times bestselling author Cinda Williams Chima comes from a long line of fortune-tellers, musicians and spinners of tales. She began writing romance novels in middle school, which were often confiscated by her teachers.

The Warrior Heir was named to Voya’s Best Science Fiction and Fantasy 2005-2006, is a 2006 Booksense Summer Reading Pick, was named to the 2007-2008 Lone Star Reading List, and was a finalist for the 2006 Great Lakes Book Award. Warrior Heir received a starred review in the Bulletin of the Center for Children’s Books and a “Perfect Ten” (5Q, 5P) in Voya. The Wizard Heir also received a “Perfect Ten” from Voya and appears on Voya's Best Science Fiction and Fantasy 2007. The Dragon Heir received a starred review in Kirkus, was named to Kirkus's Best YA 2008 list, was a VOYA Perfect Ten, and is a USA Today, Indie Next, and NYT bestseller.

Chima's Seven Realms series launched with The Demon King in October, 2009.It received a starred review in the Bulletin of the Center for Children's Books, was a Voya Perfect Ten and was named to the 2009 Voya Best Science Fiction, Fantasy, and Horror List. The Exiled Queen followed in September, 2010. It received a starred review from Kirkus, was a Voya Perfect Ten, and a New York Times bestseller. The Gray Wolf Throne follows in September, 2011.

Chima is a graduate of Case Western Reserve University and the University of Akron. Chima is an active member of the Society for Children’s Book Writers and Illustrators and the Science Fiction and Fantasy Writers of America. She has been a workshop leader, panelist, and speaker at writing conferences, including the Northern Ohio SCBWI Conference, the Western Reserve Writers’ Conference, and the World Fantasy Convention. She frequently speaks to young writers and readers at schools and libraries nationwide.

Chima lives in Ohio with her family, and is always working on her next novel.
Martina Boone at 6:00 AM