Stefanie Gaither, author of FALLS THE SHADOW, explains the importance of playlists and falling in love.


What is your favorite thing about FALLS THE SHADOW?

Besides the fact that it's an actual, real life book that I can now hold in my hands, lol? :) Hmm, I'd have to say it's the relationship between my protagonist, Cate, and her sister's clone, Violet. These two were so explosive anytime they ended up on the page together, and I loved bringing their complicated history and unconventional bond to life.

The initial draft took about two and a half months, then after that snagged me an awesome agent, we did a round of revisions that took about a month, and then once we sold it to Simon and Schuster, it went through a few more rounds of edits that took a combined total of about three months. So, six, seven months, all together? Though it felt like a lot longer! And there was plenty of brainstorming in-between edit rounds not included in that, too.


FALLS was my fourth completed book, and it will be my first published. It took me about four years between my first declaration of "I'm going to write a complete novel!" (and actually following through with that!) before I got an agent and then went on to sell FALLS. So, medium length and difficulty? :) I know people who have taken way more time and people who have taken way less time. I like to think it was enough time and rejection for me to build up a thick skin, but not so much time and so many rejections that I ended up going insane (well, not completely at least...)


I usually have to have music, and each of my projects has its own playlist. True story: I can usually tell how serious I am about a book by how many songs I'm adding to its Spotify playlist. When like every song I hear is starting to remind me of a book I'm writing, and I have to add it to said book's playlist, then I know stuff's getting real.

As for where I write, I have an office space at home, but I'm most productive in coffee shops, far away from my cozy bed and all those seasons of Doctor Who waiting to be re-watched on Netflix.

"Fall in love with as many things as possible." I totally stole that from a pin I saw on Pinterest, but yeah, I sort of love it. Live widely and experience widely, because you never know what random lovely new thing might inspire your writing. And also? Stop comparing your writing journey to others'. Every writer I know does this during weak moments (myself included), but seriously, it's just poison to a writing career. And most of the time you're only seeing the good stuff that's happening to these other authors, so of course their successes look shinier than whatever you're currently slogging through.


Enter here to win a signed hardcover copy of FALLS THE SHADOW! 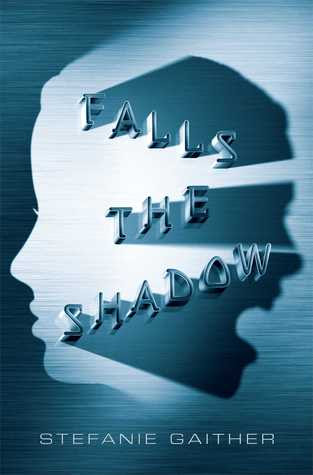 After co-managing a coffee shop for several years while simultaneously earning her B.A. in English, Stefanie Gaither left the small business world behind to focus on her author career instead. Now, in addition to penning YA novels, she also work part-time as a copywriter for an advertising agency. She lives near Charlotte, North Carolina with her husband and her incredibly spoiled Shih Tzu.
Adventures in YA Publishing at 6:00 AM