Peter Saloman, Author of ALL THOSE BROKEN ANGELS, Offers Up His Best Advice for Writers and Discusses His Publishing Journey

What is your favorite thing about ALL THOSE BROKEN ANGELS?

When I first started writing the story, I quickly realized that it was in a very strong, particular 'voice.' For the most part, I tossed aside a number of the 'rules' of fiction writing: 'no run on sentences' and 'no repetition' and 'no sentence fragments' for example. In their place, I used a number of the 'rules' of poetry. So, while the book is prose, it reads much more fluidly than my first novel, HENRY FRANKS. A good example is the final paragraph of chapter three:

The voice I wrote ATBA in was insanely difficult to sustain. Every day I'd worry that I wouldn't be able to sustain that voice and every day, after writing only 1,500 words or so, I'd be so exhausted from writing that I'd need a very long nap. And then, every night I'd worry that the next day I wouldn't be able to continue in that voice. It was a tremendous relief to finish that first draft.

Because of how much I struggled with the voice of ALL THOSE BROKEN ANGELS, I have been incredibly gratified and relieved to have critics respond so well to it. VOYA described the writing as having 'a literary feel' and Publishers Weekly said that I managed to create 'the sensation of slipping between the worlds of the living and the dead.' And, of course, the Starred review from Booklist that highlighted the 'pervading sense of shuddery doom.'

What I think I was able to create, by sustaining that voice, is a ghost story where the words themselves have the haunting quality of dreams or poetry. Or, at least, I hope they do.

I started writing my first novel in high school. In 1984. It's terrible. Nope, not a strong enough word: It's REALLY terrible. Most of the feedback I received on it was that my dialogue was horrible, and that my characters were kind of flat. So, for book #2 I wrote a 'novel' with a TON of dialogue. It's basically six characters in search of a plot, since it's not much more than a love story. But it was great practice. By the time I was done with it I felt as though my dialogue and characterization were far stronger than they had been. I took all that experience into book #3, an adult suspense/thriller that while a lot better than anything I'd written to date, still wasn't good enough to sell.

It wasn't until I started writing YA, 20 years after starting that first novel, that I got close to publication. And it wasn't until book #5, almost 30 years after high school, that I wrote my first YA Horror novel, HENRY FRANKS, which was published in 2012. Now I'm known as a YA Horror author.

It was a long road, but worth the effort. So glad I never gave up.

Just write. Never stop writing. You can't revise and edit and perfect your writing if there's nothing on the page to begin with. And, most importantly, learn to LOVE revising and editing. Learn to LOVE the criticisms and feedback you receive. People are taking time out of their own lives to help you with your writing, honor and respect that with as much sincerity as possible. Time is precious and it's not their writing but they're still trying to help you. Even if what they're saying hurts, and it will, your writing will be better for listening humbly, even if you don't agree with their suggestions and comments. They are only trying to help you. And revising is a must. It is everything to getting published. But, still, you need to write. So celebrate finishing that first draft...but then get back to work.

My current work in progress is a novel based off a short story I published last year called 'The Questioner's Apprentice.' I was asked to be the featured author in an anthology (Gothic Blue Book III: The Graveyard Edition). The only criteria was I needed to write a story set in a castle with a supernatural creature. After thinking about it far too long, I realized I didn't want to write a vampire story or something so I asked the editor if I could create my own creature. She said 'if you can create your own creature in 3500 words or less, go for it.' So I did. The result was the Morsus, a creature that feeds on human adrenaline.

By the time I was done, I'd come up with a YA Horror contemporary novel set in New Orleans. I have another short story coming out shortly ('Prince Frederick' in Ladies and Gentlemen of Horror 2014) that also 'stars' the Morsus. All of the stories are interconnected in some way, sort of an entire universe the way vampires show up in everything from comic books to movies to novels to tv. I hope to have the novel, MORSUS, out on submission later this year as the first book of a trilogy. 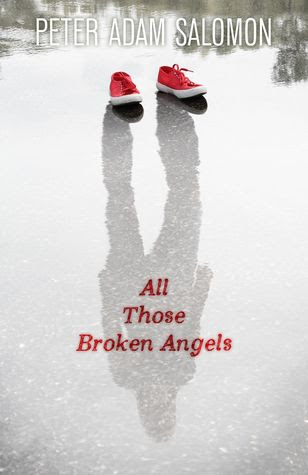 Comforted by a shadow. Haunted by the truth.

Richard Anderson was the last person to see his friend Melanie alive. She vanished when they were six and while the police never found Melanie, a part of her remained—a living shadow that is now Richard’s closest friend.

For ten years, Richard has never questioned the shadow that keeps him company . . . until a new girl moves to town, claiming to be Melanie. Desperate to prove the girl is a fake, the shadow leads Richard to the place where her killer buried her bones. But Richard finds skeletons from several different children . . . and evidence suggesting that perhaps the shadow isn't who she says she is.