Mindy McGinnis, author of IN A HANDFUL OF DUST, discusses revisiting a world after a decade.

What is your favorite thing about IN A HANDFUL OF DUST?

The best part of writing DUST was revisiting this world ten years later. Lynn is an adult now, Lucy has become a teen. I got the chance to play with who they had become, how they had grown and changed, and what their relationship is like a decade after their lives in NOT A DROP TO DRINK.

I wanted to see more of the world I built in DRINK, venturing beyond the small area of the pond and Lynn's home. Fast forwarding ten years came from wanting to see what Lucy had become.

I wrote it fairly quickly, in about six months.

I had been writing for ten years before I landed representation with NOT A DROP TO DRINK. Previous to DRINK I had trunked three adult novels and one YA title.

I like silence, although sometimes I'll put on white noise if there's too much background going on. I write in bed, at night - it's my only free time!

Be able to take, and process, criticism. If you can't do that you will never improve.

I am editing my 2015 release, which will be coming from Katherine Tegen Books. It is a Gothic historical set in an insane asylum, tentatively titled A MADNESS SO DISCREET.


Enter here to win a signed hardcover copy of IN A HANDFUL OF DUST! 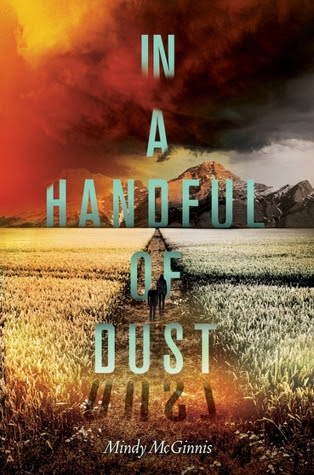 The only thing bigger than the world is fear.

Lucy’s life by the pond has always been full. She has water and friends, laughter and the love of her adoptive mother, Lynn, who has made sure that Lucy’s childhood was very different from her own. Yet it seems Lucy’s future is settled already—a house, a man, children, and a water source—and anything beyond their life by the pond is beyond reach.

When disease burns through their community, the once life-saving water of the pond might be the source of what’s killing them now. Rumors of desalinization plants in California have lingered in Lynn’s mind, and the prospect of a “normal” life for Lucy sets the two of them on an epic journey west to face new dangers: hunger, mountains, deserts, betrayal, and the perils of a world so vast that Lucy fears she could be lost forever, only to disappear in a handful of dust.

In this companion to Not a Drop to Drink, Mindy McGinnis thrillingly combines the heart-swelling hope of a journey, the challenges of establishing your own place in the world, and the gripping physical danger of nature in a futuristic frontier.


Mindy McGinnis is a YA librarian and author, represented by Adriann Ranta of Wolf Literary. Her YA debut, NOT A DROP TO DRINK, is a survival tale set in a world with limited fresh water. It will be available from Katherine Tegen / Harper Collins, September 24, 2013.

She is an avid blogger, posting six days a week to her personal blog, Writer, Writer Pants on Fire, which features interviews with agents, established authors, and debut authors. Learn how they landed their agents, what the submission process is really like, and how it feels when you see your cover for the first time. She also does query critiques every Saturday on the Saturday Slash for those who are brave enough to volunteer.

She also contributes to the group blogs From the Write Angle, Book Pregnant, Friday the Thirteeners, The Lucky 13s, The League of Extraordinary Writers and is a member of the Class of 2k13.
Adventures in YA Publishing at 6:00 AM