What is your favorite thing about WINTERKILL?

My favourite thing about WINTERKILL is the setting. It takes place on a reimagined frontier- a fantastical river valley on the prairies, inspired by a place I know and love. I've always been drawn to wild places; as a child I could spend full days with little more than a pinecone and a creek for entertainment. Being out in the woods unlocked my imagination like nothing else could, and it still does. Natural settings possess a kind of magic, I think, because even the most plugged-in of us can feel restored/changed after sitting out under a starry sky somewhere or breathing fresh mountain air. Being out in the wild resonates with us, somewhere deep down. Perhaps it's because the possibility of discovering new things about yourself or your world is right at your fingertips. Or perhaps because our subconscious tells us we should be connected to the land that sustains us. Whatever the case, I am a fan of trees. I think that's pretty evident in the book-even if they are a bit creepy.

For me, story ideas start as an image and I work out from there. In this case, it was the image of a girl just inside a line of trees-some place she wasn't allowed to be-and I could hear a phrase in my head (the first line of the book). So then I had to figure out who she was and what she was doing there. And certainly there were larger questions on my mind as I shaped the world of WINTERKILL. I've always been fascinated by the idea that certain events in history might have played out differently. In this case, I wondered what it might be like if the settlement of the west had gone disastrously wrong for the settlers, as opposed to the indigenous people here. What would that look like? In what scenario would that occur? I've also long been fascinated by fear- how fear affects our decisions, both individually and societally.

WINTERKILL was a NaNo novel. I wrote it in a month, revised it for 10 months, started querying and accepted representation, then revised with my agent, and when it sold revised with my editors. So from inception to a finished, copy edited manuscript at my publishing house, it was a process of about 26 months. Kind of a whirlwind, actually.

My road was fairly short and smooth, on the surface. I only have one book "in the trunk", and the first work I ever submitted anywhere for publication (a short story for a Canadian speculative fiction anthology) was accepted. Having said that, I also think that had I started pursuing publication ten years ago, it would've taken me until now to be published. I feel as though I started writing fiction when it was right; when I had enough desire and enough experience and when I felt like I had something to say. So as much as it feels I've landed in the most natural vocation for me, it also feels as though everything I've done in my life has been working towards this, not as though I'm finally doing something I should have been doing all along.

My first and second books were written on my lap wherever/whenever I could find space/time. It was not ideal! I now rent space in a studio, far away from the laundry and dust bunnies and every day distractions. Sometimes I listen to music, mostly to shut out studio goings-on (it's a shared artists' space: three writers, one film production manager, a visual artist, a textiles artist, and one band occasionally rocking out in the basement). If I'm in studio alone, I prefer silence. And tea. And chocolate.

Find a critique partner you trust-her/his outside eyes are invaluable, and her/his cheerleading is critical.

WINTERKILL is the first book in a trilogy, so I am working on the second book right now. New world, new adventures- very exciting! 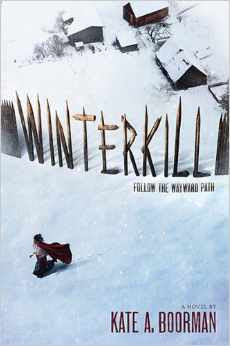 Emmeline knows she’s not supposed to explore the woods outside her settlement. The enemy that wiped out half her people lurks there, attacking at night and keeping them isolated in an unfamiliar land with merciless winters. Living with the shame of her grandmother’s insubordination, Emmeline has learned to keep her head down and her quick tongue silent.

When the settlement leader asks for her hand in marriage, it’s an opportunity for Emmeline to wash the family slate clean—even if she has eyes for another. But before she’s forced into an impossible decision, her dreams urge her into the woods, where she uncovers a path she can’t help but follow. The trail leads to a secret that someone in the village will kill to protect. Her grandmother followed the same path and paid the price. If Emmeline isn’t careful, she will be next.