Jeyn Roberts, author of THE BODIES WE WEAR, discusses characters with contradictions

What is your favorite thing about THE BODIES WE WEAR?
Oooo, that’s a tough one. I couldn’t possibly pick a favorite. Not just one! I really like Faye’s personality. Her tough as nails attitude on the outside, and her caring and nurturing feelings on the inside. I also really enjoy her relationship with both Gazer and Beth.

What was your inspiration for writing this book?
After my father died, I was left with a lot of questions. And it seemed that I just couldn’t come up with any answers. At one point, I thought to myself ‘imagine if there was a way to find out?’ The idea kinda formed from there. With Bodies, I was able to explore a lot of different ideas concerning the afterlife and what happens once we die.

How long did you work on the book?
It took me about a year to write. I had to stop in the middle of it to finish Rage Within.

What advice would you most like to pass along to other writers?
Keep writing. Write every day. Be open to criticism. As authors, we get very attached to our stories and often don’t see our simple mistakes. It helps to have other eyes looking over your work. Don’t be too hard on yourself. Believe.

What are you working on now?
I’m just starting edits on a ghost story that is coming out next fall. 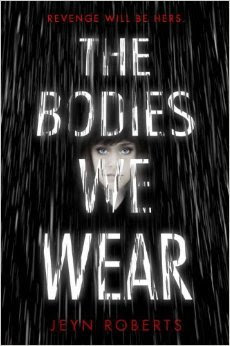 A streetwise girl trains to take on a gang of drug dealers and avenge her best friend’s death in this thriller for fans of Scott Westerfeld and Robin Wasserman.

People say when you take Heam, your body momentarily dies and you catch a glimpse of heaven. Faye was only eleven when dealers forced Heam on her and her best friend, Christian. But Faye didn’t glimpse heaven—she saw hell. And Christian died.

Now Faye spends her days hiding her secret from the kids at school, and her nights training to take revenge on the men who destroyed her life and murdered her best friend. But life never goes the way we think it will. When a mysterious young man named Chael appears, Faye's plan suddenly gets a lot more complicated. Chael seems to know everything about her, including her past. But too many secrets start tearing her world apart: trouble at school, with the police, and with the people she thought might be her friends. Even Gazer, her guardian, fears she's become too obsessed with vengeance. Love and death. Will Faye overcome her desires, or will her quest for revenge consume her?


Jeyn Roberts (pronounced Jen - the Y is silent)grew up in Saskatoon, Saskatchewan, and started writing at an early age, having her first story published when she was 16 in a middle-grade anthology called LET ME TELL YOU.

When she was 21, she moved to Vancouver with dreams of being a rock star, graduating from the University of British Columbia with a degree in Writing and Psychology. For the next few years she played in an alternative/punk band called Missing Mile before moving to England where she received her MA from the prestigious Creative Writing graduate course at Bath Spa University. Jeyn is a former singer, songwriter, actress, bicycle courier and tree planter.

An avid traveler, she’s been around the world, most recently, teaching high school in South Korea.