WOW Wednesday: Write what you want to understand by Terra Elan McVoy


Terra Elan McVoy is the acclaimed author of 5 contemporary YA novels with her 6th just hitting shelves this past July 8th. Her stories are relatable and hilarious and IN DEEP is sure to hit a bit of a deeper note. Her advice today is invaluable and incredibly heartfelt.

Write what you want to understand by Terra Elan McVoy


Becoming a good writer is, I think, a cumulative experience. Writing well is a talent and skill you build upon gradually, with every book you read and every piece (published or not published, good or crappy) you write. It’s a thing I’m still working on—something I’m still developing—even after six novels, and for me that’s part of the magic: that this is a thing that can continually be perfected and improved.

So, when I start to think about the list of folks who have contributed to my skills, it grows very quickly: Natalie Goldberg taught me about the importance of first thoughts, and how to delve into specifics. Ann Lamott showed me that plot is always about character, and Stephen King insists (correctly) that it’s essential to develop a writing habit and stick to it daily. All my favorite English teachers of course need a shout out too, from Mrs. Gifford in kindergarten to the world-changing Mrs. Price, Shepard, and Merickel at Lincoln High, plus everyone in the English department at my college, St. Andrews University.

Once I mentally hit my years at graduate school at Florida State University, this list grows exponentially. Every day there I was reading something instructive, and getting feedback from teachers and peers that helped tighten and intensify my writing—even in the literature and teaching composition classes. There’s no way I’d be where I am as a writer without those two years.

After that was my experience at Scholastic, which hugely informed my writing life, as well. The sheer amount of young adult I was reading there alone influenced me greatly, not to mention seeing how the publishing world worked, interacting with editorial folks, and most importantly meeting the girl who would become my own editor.
And, since every single thing you read also somehow informs your writing . . . well, at this point that list of influential authors is now in the several hundred thousands.

So, obviously, a lot of what I have to say about “how I became an author” is really that there isn’t one magic thing that made it happen for me. Instead it’s been about about a lot of time, and effort, and reading, and writing stuff that will never go anywhere, and meeting people, and willingness for the whole undertaking not to be the kind of experience that can be transformed by one magic thing. (Which I think is true for pretty much everyone.)

That said, there was something my thesis director and mentor at FSU said once to our class that has heavily influenced me, which I definitely want to pass along.

He said, “Write what you want to understand.”

It’s a variation on Hemingway’s “Write what you know,” or Stephen King’s assertion to “Write the truth,” and for me it’s a much more interesting bit of advice to follow. First of all, it generates a sense of discovery around writing. When coming at writing from this angle, you don’t automatically have all the answers—you’re creating to find out something—and that feels exciting. Second and most important though, approaching the work in this way forces you to use your imagination (and probably some research) in a more challenging manner. Sure, it’s necessary to write the truth or what you know as well (those two geniuses are still, well, genius), but “write what you understand” encourages me to use a bunch of writing muscles at the same time, and I like that.

In my novel Criminal, for example, I used “write what you want to understand” to tell a story inspired by a crazy news report I’d heard about a girl arrested for helping her boyfriend kill the parent of his other girlfriend. (Yeah read that sentence twice and let it sink in.) For it, I had to imagine and actualize someone in circumstances completely unfamiliar to me (plus I had to do a lot of research about jail). Creating Nikki’s story required me to pull from what I knew, and what I think is true, but it also allowed me as a writer to enter a world I previously had no concept of.  For In Deep, out this week, I got to delve into the arena of competitive swimming. Influenced by watching the 2012 London Olympics and Michael Phelps winning all those medals, I wondered what it would be like to be that disciplined and focused, and to have all that glory so young, knowing it would be over so quickly. I also wanted to understand my own difficult relationship with competition, and what life would be like if everything—even friendships and relationships—were looked at only through a competitive lens.

Writing what you want to understand keeps the puzzles, the challenges, and the questions all coming. It allows me to continually look at my life and the stories I come across in it with interested eyes, constantly asking “Is this what I want to explore next? This?” It’s a way to keep growing, and discovering as a writer, and best of all it guarantees that I’m continuing to cumulatively improve at this one thing I love best in the whole world. Terra has been reading and writing, basically, ever since she learned how to, and everything she has done has pretty much been connected to those two things. She went to college at a small, fantastic school (with a super writing program) called St. Andrews Presbyterian College. Terra got her Master's degree in Creative Writing from Florida State. She has worked as an event coordinator at a major chain bookstore; as a freelance writer; a composition instructor; an editorial assistant at an NYC publisher; as manager of an independent children's bookstore, in Decatur, GA, Little Shop of Stories (where she still works as a bookseller); and as Program Director of the AJC Decatur Book Festival. 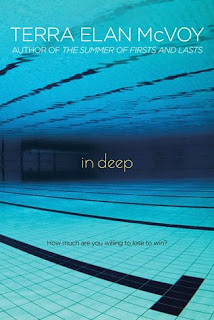 Ultracompetitive Brynn from The Summer of Firsts and Lasts craves swimming victory—and gets in over her head—in this irresistible novel from Terra Elan McVoy.

Nothing else matters to Brynn as she trains her body and mind to win. Not her mediocre grades and lack of real friends at school. Not the gnawing grief over her fallen hero father. Not the strained relationship with her absent mother and clueless stepdad. In the turquoise water, swimming is an escape and her ticket to somewhere—anywhere—else. And nothing will get in her way of claiming victory.

But when the competitive streak follows Brynn out of the pool in a wickedly seductive cat-and-mouse game between herself, her wild best friend, and a hot new college swimmer, Brynn’s single-mindedness gets her in over her head, with much more than a trophy to lose.