How to Write Scary by Gretchen McNeil

Here's the thing about writing horror: it's all about the set up.

We're all scared of different things.

For some people, the idea of a giant spider lurking under the bed, is enough to paralyze them with fear. For others, it's the idea of being buried alive in a close, black coffin, utterly sightless in the dark. Still others fear the darkness. Or heights. Or being abandoned in the middle of nowhere.

So many different kinds of scary. The things we fear most come in a variety of shapes and sizes, from the physical – like spiders and sharks – to the esoteric – like claustrophobia and paranoia – to the otherworldly – like demons and vampires and witches (oh my!). What scares one person might be unicorns and rainbows to someone else. But set up properly, even unicorns and rainbows can scare the crap out of you.

To me, conveying fear isn't just about describing a situation, object, or person that someone might find scary, but giving a blow-by-blow of the event and actually detailing the fear reaction in the characters.

We all know exactly what it feels like to be scared. First you have the anticipation: What's behind that closed door? What's making that scratching noise in the attic? What's lurking in the deep, dark waters? It's the tensing of muscles like you're expecting a blow, that stretching of all your senses, trying to see/feel/hear/smell danger before it pounces on you. The higher the tension is pitched, the bigger the wallop.

Next, the reveal. The door opens to expose a dead body that spills out on top of our poor heroine the moment she turns the doorknob. The scratching noise in the attic inexplicably moves through the ceiling, down the stairs and manifests in a dark, demonic entity. The dorsal fin of a great white shark breaks the surface of the water in which you're swimming. The terror has been revealed in one jarring, scream-inducing moment!

But that's not scary enough, not for the expectant reader. You need the next step in the process – experiencing the fear through the eyes of the main character. We need to feel their bodies tremble as they break out into a cold sweat. We need to hear the blood-curdling scream that explodes from their mouths. We need to internalize the sick, sinking feeling in their stomachs as death closes in around them.

And lastly, the action. Our heroine's panicked flee from the house, our hero's desperate attempt to out maneuver a man-eating shark. Will they survive? Will they escape? Hearts pound in anticipation with every turn of the page!!!!

Broken down, none of these steps in the process seems particularly scream-worthy, but strung together with pacing and tension? WHAM. Horror show. 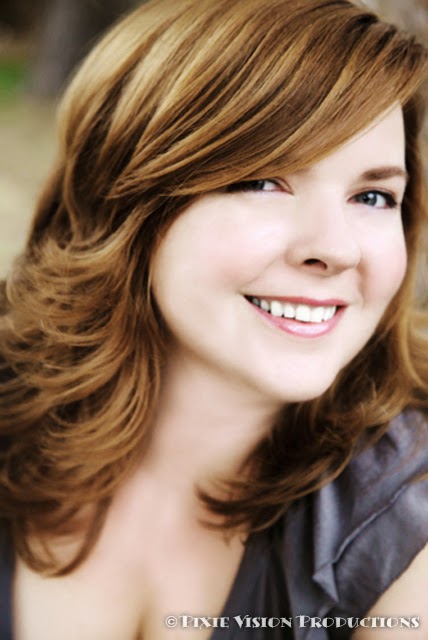 Gretchen McNeil's YA horror POSSESS about a teen exorcist debuted with Balzer + Bray for HarperCollins in 2011. Her follow up TEN – YA horror/suspense about ten teens trapped on a remote island with a serial killer – was a 2013 YALSA Top Ten Quick Pick for Reluctant Young Adult Readers, a Romantic Times Top Pick, a Booklist Top Ten Horror Fiction for Youth, and was nominated for "Best Young Adult Contemporary Novel of 2012" by Romantic Times. Gretchen's 2013 release is 3:59, a sci-fi doppelganger horror about two girls who are the same girl in parallel dimensions who decide to switch places.

In 2014, Gretchen debuts her first series, Don't Get Mad (pitched as "John Hughes with a body count") about four very different girls who form a secret society where they get revenge on bullies and mean girls at their elite prep school. The Don't Get Mad series begins Fall 2014 with GET EVEN, followed by the sequel GET DIRTY in 2015, also with Balzer + Bray. Gretchen also contributed an essay to the Dear Teen Me anthology from Zest Books.

Gretchen is a former coloratura soprano, the voice of Mary on G4's Code Monkeys and she sings with the LA-based circus troupe Cirque Berzerk. In her spare time, she blogs with The Enchanted Inkpot and she was a founding member of the vlog group the YARebels.

Gretchen is repped by the incomparable Ginger Clark of Curtis Brown, Ltd. 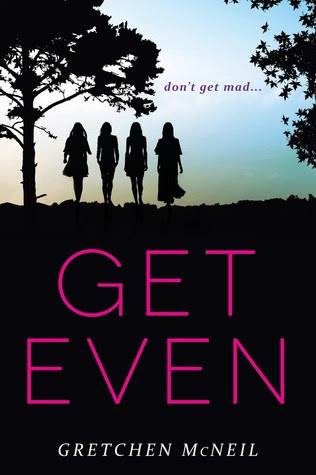 To all outward appearances, the girls barely know each other. At best, they don't move in the same social circles; at worst, they're overtly hostile.

Margot Mejia – academically ranked number two in her class, Margot is a focused overachiever bound for the Ivy League.

Kitty Wei – captain of the California state and national champion varsity girls' volleyball team, she's been recruited by a dozen colleges and has dreams of winning an Olympic gold medal.

Olivia Hayes – popular star of the drama program, she's been voted "most eligible bachelorette" two years running in the high school yearbook and has an almost lethal combination of beauty and charm.

Bree Deringer – outcast, misfit and the kind of girl you don't want to meet in a dark alley, the stop sign red-haired punk is a constant thorn in the side of teachers and school administrators alike.

Different goals, different friends, different lives, but the girls share a secret no one would ever guess. They are members of Don't Get Mad, a society specializing in seeking revenge for fellow students who have been silently victimized by their peers. Each girl has her own reason for joining the group, her own set of demons to assuage by evening the score for someone else. And though school administration is desperate to find out who is behind the DGM "events", the girls have managed to keep their secret well hidden.

That is until one of their targets – a douchebag senior who took advantage of a drunk underclassman during a house party, videotaped it on his phone, and posted it on YouTube – turns up dead, and DGM is implicated in the murder.

Now the girls don't know who to trust, and as their tenuous alliance begins to crumble, the secrets they've hidden for so long might be their ultimate undoing.

** Please note: This is an updated repost. AYAP is on limited hiatus until August, with a mixture of old favorites, new posts, and new giveaways.
Jan Lewis at 5:00 AM