Confessions of a Serial Novelist (Part 1) by Clara Kensie

Hey gang! I’m a regular at Adventures in YA Publishing with the Questions of the Week, and I’m making some special appearances here this month to dish about my experience with serialized novels: specifically, the unexpected pleasures of reading serials, how to write a serial, and the unique challenges and opportunities for marketing serials. Stick around: you may be surprised by what you learn.


When people ask me about my debut series RUN TO YOU, I describe it in two ways: 1) it’s a romantic thriller about a family on the run from a deadly past and a first love that will transcend secrets, lies, and danger. And 2) it’s Harlequin Teen’s first serial. Each of the two books in my RUN TO YOU series is published in three installments. Book One is First Sight, Second Glance, and Third Charm. Book Two is Fourth Shadow, Fifth Touch, and Sixth Sense.

I’ll confess something to you guys: I did not want Harlequin Teen to serialize my books. I doubted the YA audience would want to read my book if it was published in the serial format. In fact, I was so opposed to the idea, and I was so stressed about it, that my jaw joints locked up. I couldn’t close my mouth all the way for a week. I am not exaggerating. I couldn’t eat—I lost six pounds. Not a good way to lose weight.

My editor at Harlequin Teen, the esteemed Natashya Wilson, explained that the publishing marketplace is constantly changing. First popularized by 19th century literary greats such as Charles Dickens, Leo Tolstoy and Harriet Beecher Stowe, serials are making a huge comeback in today’s digital world. Harlequin Teen was searching for a book they could release as their first serial— not just their first serial, but one of the first YA serials ever. They wanted a book with unique character voices, a breathtaking romance, and a thrilling plot with jaw-dropping twists that would work well for serial breaks and would leave readers dying to know what happens next. They found that book in a manuscript they had recently acquired: RUN TO YOU.

So. Harlequin Teen was serializing my books, whether I wanted them to or not. But, because I love and trust my editor, because I was flattered by what she said about RUN TO YOU, and because I wanted to unfreeze my jaw joints and eat again, I decided to give the serial thing a chance. I bought a few serials (among them: Beth Kery’s Because You Are Mine romances and Neal Pollack’s yoga detective mysteries), to see if I would like them.

And you know what? I did! I truly enjoyed the experience of reading serialized novels. Here’s why:

• I am extremely busy, as most people are. Very often, I won’t read a book because it’s so long and I know I won’t have time for it. But with a serial, I can always find an hour or two during the week to read one of the episodes. Finishing an installment feels incredibly gratifying and rewarding.

• I also like the versatility of serials. They give you a choice: savor or binge. People do that all the time with TV series on Netflix – watch one episode at a time, or watch an entire season at once, right? It’s the same with serialized novels. I savored some serials: I would read each part as it was released, and then I’d look forward all week long to the release of the next part. I woke up each Tuesday, knowing the newest episode had been released while I slept and was waiting for me on my e-reader. For other serials, if all the installments had already been released, I binged: I read the entire book at once.

• Collecting each installment felt like a game, or a challenge. I loved watching the newest episode download onto my e-reader. In fact, I still get a thrill when I look at my collections of serialized novels on my bookshelves.

• There’s the social aspect of serials, too. My friend Tina and I read one of Beth Kery’s serials together. We discussed each part as it released, the same way we discuss our favorite weekly television series. We anxiously anticipated the next installment together: What do you think will happen next? What will they do? It was a really, really fun time.

I found the experience so enjoyable that I am now 100% on board with the RUN TO YOU series being a serial. I was wrong to disregard serialized novels before I’d even tried reading one. Now I’m thrilled that Harlequin Teen chose my series to be one of the first YA serials on the market. It’s truly an honor to be a trailblazer in the format. No more frozen jaw joints for me!

So, my friends, are you opposed to reading serialized novels, or are you intrigued? Have you read any serials? Which ones? Leave your comments and questions below. I’m interested in what you have to say!

This week we discussed the surprising pleasures of reading a serialized novel. Next week, I’ll be back to talk about the process of writing a serial. The following week, I’ll tell you about the unique challenges and special opportunities for marketing a serial. 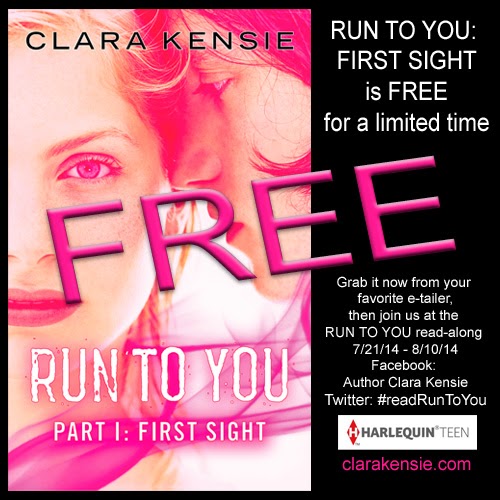 In the meantime, you can give the serial experience a try for free! Harlequin Teen has put up the first installment of RUN TO YOU for free across all platforms for a limited time. Grab it now, and then join Harlequin Teen, an amazing group of book bloggers, and other fans for a RUN TO YOU read-along of Book One. We start July 21 and read one installment each week. Like my Facebook page (Author Clara Kensie) or use #readRunToYou on Twitter to answer cool questions, discuss your favorite parts with other fans of the book, and learn insider tidbits about each episode. I'll be making appearances and answering questions from fans. I have lots of prizes to give away, including custom RUN TO YOU necklaces and books from Harlequin Teen. All of the details are on my blog: http://bit.ly/readR2Y. Hope to see you there! 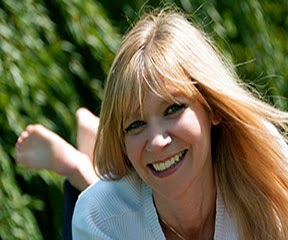 Clara Kensie grew up near Chicago, reading every book she could find and using her diary to write stories about a girl with psychic powers who solved mysteries. She purposely did not hide her diary, hoping someone would read it and assume she was writing about herself. Since then, she’s swapped her diary for a computer and admits her characters are fictional, but otherwise she hasn’t changed one bit.

Today Clara is the author of twisty mysteries and chilling thrillers for young adults (but it's the romance that will take your breath away). Her debut series, the romantic thriller RUN TO YOU, is Harlequin TEEN’s first serial. Book One (First Sight, Second Glance, and Third Charm) is available now. Book Two (Fourth Shadow, Fifth Touch, and Sixth Sense) began July 7, 2014 with weekly releases.

Her favorite foods are guacamole and cookie dough. But not together. That would be gross. 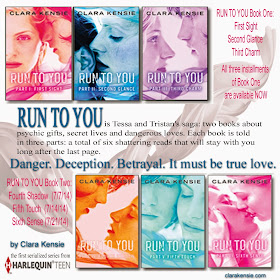 For more about each installment of the RUN TO YOU series, click here.