WOW Wednesday: A Q&A From Readers With Elsie Chapman

Elsie Chapman is a YA author who debuted last year and hails from my area of BC, and for me, there is something that is so cool about having such an amazing author come from a place that is so close to you. DUALED showed up on shelves last year and blew readers out of the waters with the action, and with the sequel, DIVIDED dropping just this past tuesday, i'm sure it's going to do the same!

A Q&A From Readers With Elsie Chapman


For my guest post for Adventures in YA Publishing, I opened up my author tumblr for questions from aspiring writers with the promise of answering them as honestly as possible.

I guess, realistically, do you think that the writing life is a good life? There are lots of writers who say, “Whenever someone asks me, I tell them they shouldn’t get into writing and that it’s not worth it, you make zero money.” Yet, those writers are persistent in the writing life. What is your perspective on the writing life, and would you encourage or discourage aspiring writers?

Realistically, I think it’s a tough career choice. Not a lot of writers make a living off of just writing. You really have to love it to do it and be okay with the act of writing being enough. Don’t go into it with the goal of making lots of money, or even to get published. Neither are sure things. Instead, write, see what happens, enjoy it. Be willing to adapt and adjust.

Also, being a Canadian author, what made you get an American agent? Do you feel that the American publishing industry can afford you opportunities that Canada can’t?

I queried both American and Canadian agents; the ones who offered all happened to be American. I think nowadays, with social media and everyone being online, not having an American agent isn’t that big of a deal. I remember reading once how important it was to not only get an American agent, but a NYC based one. But things have changed a lot since then; being online is what’s essential. I live in Japan now, which is pretty far from the US, but it’s never been an issue.

What is working with an editor really like? How much editing is done with your agent before you even move forward to the editor? What is the actual process for edits, does your editor work with you to develop your novel or do they send you a list of prescriptive changes?

Working with an editor is a real eye opener. You learn so much about your writing, about structure and development. I had a lot of facepalm moments, seeing things about my books I hadn’t been able to see before. So for me, it truly was a learning curve. From what I can tell, and have learned since becoming an author, all editors work differently. Not only that, I think each book itself invites a unique approach when it comes to edits. Regarding agents, some are more editorial than others, and they’ll usually note this on their site. So before you query, read up on an agent’s style.

I know that it was fairly easy (in terms of some of the mountain of rejection some authors go through) for you to find an agent. What was that initial offer like? Did your agent accept your book on the condition that it would be developed further or as is, how much did your agent expect of you in terms of building a platform? Basically what is the agent relationship like?

I was very fortunate to have multiple offers, but it still didn't feel easy getting there! I was incredibly happy, as you can imagine. A moment like that can be pretty significant in terms of what comes next in your life. Regarding the agent-author relationship, it really depends on the individuals. Some agents are more hands-on, some authors more independent, etc. It’s just about finding a great tandem, with the common goal of writing and getting books published.

When selling your book to publishers, did you want to take the highest paying offer, or would you consider an offer with less money if it seemed to have your best interests at heart.

Your agent will discuss all the business aspects with you, like how much marketing is being promised, or the pros and cons of certain sizes of advances. Look up how houses have supported similar books in the past, their backing of their current authors, etc. In the end, it comes down to both gut feeling and practicality.

There is a lot of talk about the need for diversity in YA, which I agree with. What steps do you think need to be taken in order to achieve that?

There are lots of amazing diverse books out there, but the problem is that most just don’t get nearly the same kind of media and attention as non-diverse books do. We’re not asking for favours—we are asking to be treated like we belong in the marketplace because we do. I think it comes down to everyone in the industry making very real efforts to change things up—librarians, booksellers, agents, editors, reviewers, bloggers, readers. This also includes writers committing to writing books with diversity in mind.

If you could change one aspect about the industry what would it be?

Do you believe writers block exists? A lot of aspiring writers get stuck, or blocked, when you write, and you don’t feel like it that day, how do you force yourself to keep going, because you turn our your first drafts very efficiently and I can’t seem to do that.

I don’t know if it exists, to be honest. Sometimes we think too much about writing (or not writing, as it were) instead of just doing it and we begin to lose perspective. Certainly I’ve sat and stared at a blank screen before and felt frustrated and depressed. But I’ve come to recognize the onset of that feeling and to know to stop it before it gets worse. Usually I can just change the music and get some caffeine and plow through until things feel fine again. Or I’ll walk away and read for a bit and go back refreshed. Someone once said that writers need fallow periods in between drafting and editing, etc, otherwise we risk burnout, and I really do think this is true. And each writer will eventually find their own rhythm, find what works best for them. One thing to keep in mind is that no matter how rough a draft, it can still be edited, something that can’t be done with a blank page.

What would you say to people who think writing only happens with inspiration?

That sometimes inspiration needs a good kick in the butt. So write. Just write. 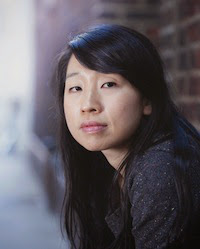 Elsie grew up in Prince George, BC, before graduating from the University of British Columbia with a BA in English Literature. She currently lives in Tokyo, Japan with her husband and two kids, where she writes to either movies on a loop or music turned up way too loud (and sometimes both at the same time).

Elsie is repped by The Chudney Agency. Her debut novel, DUALED and its sequel, DIVIDED are both available now. Published by Random House Children’s Books. 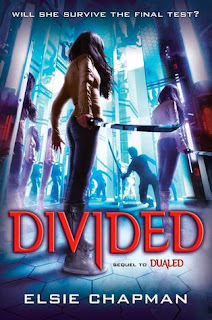 West Grayer is done killing. She defeated her Alternate, a twin raised by another family, and proved she’s worthy of a future. She’s ready to move on with her life.

The Board has other plans. They want her to kill one last time, and offer her a deal worth killing for. But when West recognizes her target as a ghost from her past, she realizes she’s in over her head. The Board is lying, and West will have to uncover the truth of the past to secure her future.

How far will the Board go to keep their secrets safe? And how far will West go to save those she loves? With nonstop action and surprising twists, Elsie Chapman’s intoxicating sequel to Dualed reveals everything.