WOW Wednesday: Start With The Theme (Song) In Mind by Charles Benoit

Charles Benoit is the author of several YA thrillers, with his latest called COLD CALLS arrived in stores on April 1st! In vein of I Know What You Did Last Summer, COLD CALLS will not disappoint with the shivers.

Start With The Theme (Song) In Mind by Charles Benoit


Before I’ve written the first word for a new book, I know exactly what I want the book to feel like when it’s done. It’s a feeling that resonates with me, that’ll drive my writing and keep me motivated well past the third chapter. It’s hard to put that feeling into a few words since it’s going to take, oh, 50,000 words to get it down on paper, and I get worried that as clear as that feeling is in my head at the start, somehow it’s going to slip away in the writing process. I’ll end up with something, but it won’t be what I wanted it to be.

That’s why I start with a theme song.

I find one song that captures the mood I want for my book, and every day before I start writing, I listen to it. Sometime it plays, looped, for hours while I do the other stuff I have to get done, like play darts and straighten my desk. It serves a purpose beyond annoying my wife—it fires up that feeling I want to capture for the book so that when I start writing each day, my mind is right where I need it to be. It takes me about 11 months to write a book. I don’t know if that’s slow or fast, I just know that that’s how long it takes me. And since I can seldom remember what I had for lunch yesterday, I need this melodic mnemonic device to remind me why I started down this road with these characters in the first place. It also helps ensure that, while lots will happen between page one and the last page, there’s a continuity of style and tone.

When I started writing COLD CALLS, I knew what I was looking for. Before I had all the characters, before I had the basics of the plot figured out, before I knew if it would be first person or third person, I had a few elements that knew had to be in this book. The first was a sense of unknown terror that something or someone was out there and it was going to get you. I knew it would involve technology, since it can be the source of a lot of anxiety, and I knew that it would get darker as it careened toward the final scene. I needed a way to keep that feeling in focus at the forefront with every sentence I wrote. I needed a theme song. After a few weeks of listening to a lot of stuff (A wonderful form of procrastination!), I found it. I estimate that I listened to that song 400+ times over the past year. You know what? I still like it. And it’s playing right now as I type this.

COLD CALLS is coming out this month. There were some wonderful surprises along the way, whole characters and scenes and plot twists I didn’t see coming when I started writing, but as for tone, it’s exactly what I was aiming for. And it sounds like this. 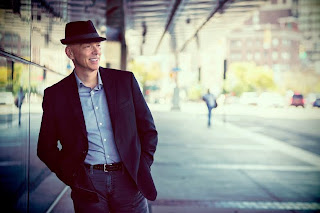 Charles Benoit is the author of three award-winning mysteries and two critically acclaimed young adult novels, YOU and Fall From Grace. His latest YA noir, Cold Calls, will be published by Clarion Books in early April. 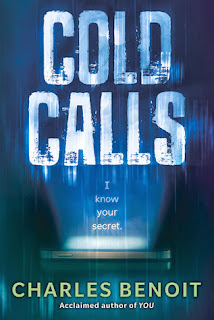 In the vein of the teen suspense classics I Know What You Did Last Summer and The Face on the Milk Carton, Cold Calls is a chilling thriller, an unsettling mystery, and a provocative exploration of bullying, culpability, and the cost of keeping secrets.

Three high school students-Eric, Shelly, and Fatima-have one thing in common: "I know your secret."
Each one is blackmailed into bullying specifically targeted schoolmates by a mysterious caller who whispers from their cell phones and holds carefully guarded secrets over their heads. But how could anyone have obtained that photo, read those hidden pages, uncovered this buried past? Thrown together, the three teens join forces to find the stranger who threatens them-before time runs out and their shattering secrets are revealed . . .