WOW Wednesday: Embrace The Struggles of Writing by Elisa Ludwig

Elisa Ludwig is the YA author of the incredibly fun Robin Hood-esque retelling of a girl just trying to get through high school and deal with the mean girls in a bit of a different way. PRETTY CROOKED came out in 2012, and the sequel PRETTY SLY hit stores on March 18th. Elisa is here with us today to talk about what she loves about being an author!

Embrace The Struggles of Writing by Elisa Ludwig

Writers love nothing more than sharing our particular challenges with one another. I mean, we really get into it, don’t we? Read any writer’s blog and you’ll hear all the hand-wringingly excruciating details about rejection at every stage, creative blocks, lack of time for working, anxiety over self-promotion, frustration at having so little control over the process.

I remember way back before I’d even finished a novel, let alone even begun the journey of querying, a (now) very successful author friend of mine told me she was changing agents, and she was really worried that no one would want her and this was the end. I had no way to understand her anxiety. From where I stood, she had it made. She’d already gotten an agent the first time!

Fast forward to the last ten years I’ve been trying to publish, and now I get it—success is an elusive concept. You can struggle at any point in your career and the goalposts keep moving. All the while, there are very real concerns, even for an already published author: Will the book I love ever see the light of day? Will anyone read it? Will my agent get what I’m doing? Will my editor pay attention to me? Will I be shouting into the echo chamber, just one more author trying to make it?

But this past year, something really shifted for me. It was actually at a semi-crisis point, you know, after a particularly hard rejection that felt like I’d miscalculated my own worth all along. That I really had no idea how to write books, and I’d been deluded for even thinking I could. I started saying the usual things like “Maybe I’m not meant to do this.” “Maybe I’ve just hit the wall.” “Maybe I should just spend more time with less stressful hobbies, like knitting or something.” (Never mind that I hate anything having to do with string.) My husband and parents and friends listened as always, most likely humoring me.

Right in the middle of one of these self-pitying conversations (pretty one-sided as far as conversations go), I had an epiphany. It was the zenlike silence on the other end of the phone that did it. My words came back to me, and suddenly I heard how ridiculous they sounded.

I realized that I actually liked the struggles of being a writer. After all, I’d put myself in this position. And why else had I stuck with this as long as I had, despite all the setbacks? Because it’s precisely those very problematic aspects of the work—the long odds of getting published, the marathon-esque training, the hard hours spent alone, the difficulty of getting readers’ attention in this overstimulating world—that give my life some shape and meaning. They give me something to strive for.

If I’d just become an accountant or whatever, I’d have figured everything out by now and as a bonus I could even do my own taxes. But I purposely picked a career that’s a lifelong pursuit, something I can continually work on and improve, so long as my eyes and hands hold out.

No one is ever going to come to me and say, “Awesome. You did it. You can go home now.” Which means that as long as I stay with this, I’m going to have to wrestle with doubts. So you know, might as well get a handle on those suckers today.

Side note: A few weeks after this revelation, I got some news that completely kicked my bad news’ ass. So things were back on the upswing AND I had a good attitude.

I’m not saying that if I’d been a runaway success at age 20 that I would have ever looked back or regretted that good fortune for one second. (Hell no! I’d be on the beach somewhere right now, toasting y’all with a margarita.) But as I near age 40, I see that all of this time I’ve spent writing, revising, reading, researching, querying, and yes, anguishing, has been its own reward. I’ve learned about myself. I’ve toughened up. And I’ve gotten better at writing.

So this is my advice: Every time you start to despair, or you feel like you’ve done all you can and you’re just not cut out for this business, try to remember that the trying part of it, all your hard work, is still yours. No one can take that from you and you’ve most likely grown because of it. Learn to enjoy your challenges (or at least laugh at them) and they won’t break you down. Remember that, tough as it is, you probably enjoy this crazy rollercoaster ride, because along with all those downs there are ups just around the bend. Stay with it, because even as the author, you never do know what will happen next. 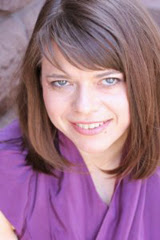 Elisa Ludwig studied writing at Vassar College and Temple University, but she wanted to be a writer long before all of that. Technically, since she started writing, editing and publishing The Elisa Bulletin which she printed out on a dot matrix printer and sold for ten cents a pop. She has been pick-pocketed twice, and once caught someone mid-pocket. Other than occasional jaywalking, she’s a law-abiding citizen. She lives in Philadelphia with her husband and son. Her first novel, PRETTY CROOKED, was followed by PRETTY SLY in 2014, with a third installment due out in 2015. 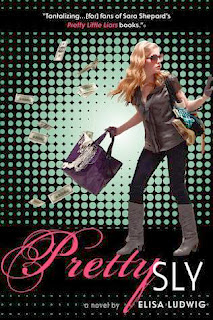 Willa Fox was told to stay out of trouble. In fact, it was an order from a very serious juvenile court judge.

However, that was before Willa found her house ransacked and a mysterious email from her mother telling Willa she had to leave Paradise Valley for a while and not to come looking for her. Willa knows her mom’s in danger and that no one at school will miss her after her recent sticky-fingered stunts with the Glitterati. So with the help of her pal Tre and with her degenerate crush Aidan as her wingman, Willa violates her probation and hits the California highway in search of her mom.

But when Willa and Aidan’s journey turns dangerously criminal and they wind up being the focus of a national manhunt, they realize it’s sometimes easier to escape the law than the truth—and that everything Willa thought she knew about her mom, and her life, was wrong.

Pretty Sly is Elisa Ludwig’s fast-paced sequel to Pretty Crooked, the second book in a trilogy that’s pitch-perfect for fans of Ally Carter. With a daring heroine who has one-of-a-kind spunk, a roller-coaster Bonnie and Clyde romance, a thrilling mystery, and a shocking twist ending, this book will have readers rooting for Willa as she makes the wrong choices to do the right thing. Fans will be eagerly awaiting the series conclusion.