Inspired Openings: Have A Crusher Of An Opening Line by Niall Leonard

Niall Leonard is the YA author of the thriller CRUSHER, whose sequel, INCINERATOR just arrived on North American shelves on April 8th! Niall has some really wonderful opening lines to share as well as his experiences writing his own!

Have A Crusher Of An Opening Line by Niall Leonard

'It was a bright cold day in April and the clocks were striking thirteen.'

'The past is a foreign country: they do things differently there.'

'It was the afternoon of my eighty-first birthday, and I was in bed with my catamite when Ali announced the archbishop had come to see me.'

These are three of my favourite opening lines; the ones that have stuck in my head, anyway, the ones that come up when anyone asks me for my favourites. More people know the first two – by George Orwell and L P Hartley respectively – than the last, which is by Anthony Burgess from his novel Earthly Powers. The hero is an author narrating his own tale, who goes on to assert that he has “lost none of my old cunning in the contrivance of what is known as an arresting opening."

How can any ordinary writer hope to match such zingers? My answer would be, don't try – because for us mere mortals there's no such thing as an inspired opening. I know this sounds like heresy, and this blog is about inspired openings, but let me explain.

I’ve worked for years as a TV screenwriter and came to novel-writing late in my career, partly because of the ridiculously high expectations I had of my own writing. The ideas I had for novels were sublime when they were floating around in my head, but somehow when I put them on the page they seemed to lose their brilliance, like fish going stale on a slab, and I became discouraged. I convinced myself that either the ideas weren’t as good as I'd originally thought or I wasn't a good enough writer to convey them. I'd put the piece aside unfinished, hoping that when I came back to it I'd somehow have acquired the necessary skill.

Of course I hardly ever came back -- I'd come up with another idea instead, sit down to write it, and fall into the same trap all over again. I wasted years that way.

I hadn't grasped that you acquire the necessary skill by working at it – by writing down your ideas and exploring them. Maybe you will never do them justice, but better to fail trying than never to try. Don't wait for inspiration – do the work and let the inspiration look after itself. If you want to write – as other authors here have said – you have to have faith in yourself, to trust yourself enough to get the words down on the page. I would discourage anyone who wants to write a novel from worrying about creating an inspired opening, or about being brilliant, or even about being good. Instead I would urge them to dive into their tale wherever the fancy takes them and keep going.

There's no law that says you have to start a novel at the beginning. Some writers start with one scene that they can't get out of their head, with no idea where it might fit into a story. They write their way forwards and backwards from there, until they get a sense of the whole tale and what it's about and where it should begin and where it should end. The opening scene might be the very last thing they write; by the time they get there, they will have a much better idea of what their story is about, and a much better chance of coming up with that arresting opening. Their readers, of course, will have no concept of the months of torment that led to that 'inspiration'.

In the first chapter my hero Finn goes out to work at a fast-food restaurant and returns in the evening to find that his father, an out-of-work actor trying to write a screenplay, has been murdered. I wrote the first chapter some years before the rest of the book, pretty much for reasons explained above – somehow I convinced myself that the story would write itself. When I finally found the impetus to finish the book (thank you, Nanowrimo 2011) rather than going back to revise the first chapter, I sat down and figured out what would happen next: Finn would call the cops, who'd immediately suspect that he was the killer, because that's what cops do.

I roughly sketched out the rest of the plot, then I started writing, and kept writing until I got to the end. When all that was done I revisited the first chapter – and by that point I could see what to cut there and what needed to go in its place. Essentially the first chapter was the last thing I wrote.

By the time I sat down to write Crusher’s sequel, Incinerator, I understood better the old saying that 'writing is re-writing.' Don't expect to start your story brilliantly – just start. Get writing, and keep writing, and get to the end. That's the time to go back and be hard on yourself, to ruthlessly revise and edit and polish. That's a good time to look hard at the opening.

Because, to brazenly restate my opening heresy, there is no such thing as an inspired opening. There are openings that inspire the reader, but they are the result of months, if not years, of solid grind. It may suit the author to pretend it was effortless, and the reader to believe it, but as writers we can't afford to fool ourselves. Write your story, then revise it and revise it, and find the best opening you can. And if any of your readers tell you it's inspired, shrug modestly, accept the compliment, and keep it to yourself that you know better – it wasn’t born of inspiration, but an awful lot of *&^%ing hard work. 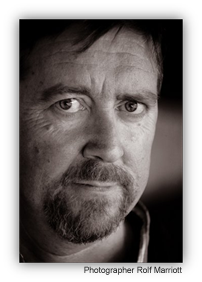 .Niall Leonard grew up in Newry, Northern Ireland.In 1977 he attended the University of York to study English, and from there went on to The UK National Film and Television School where he trained as a screenwriter and director. Recently Niall completed screenplays for two big-budget two-part thrillers for US cable TV, loosely adapted from novels by Alastair Maclean. Air Force One is Down started shooting on location in Luxembourg in May 2012, with Puppet On A Chain slated to go into production later the same year.

As part of the 2011 Nanowrimo novel-writing event Niall wrote Crusher, a gritty crime thriller set in London featuring Finn Maguire, a dyslexic young offender investigating the murder of his father. The novel was picked up by Random House for publication in October 2012, and Niall is currently working on its sequel.

Niall has led seminars and workshops on screenwriting and script editing for the BBC, the Northern Ireland Film Council and the Irish Screenwriters’ Guild, and lectured on the creative process at the University of Reading.

He is married with two kids and a rather smelly dog and lives in West London. 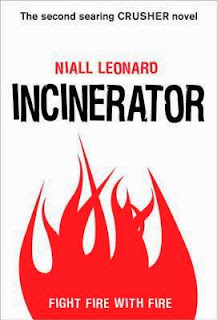 Incinerator is the sequel to Niall Leonard's debut YA novel, Crusher.

London ganglord The Guvnor is in hiding, and Finn Maguire has begun a new life running a boxing gym with his old friend and coach Delroy. But when Finn's lawyer Nicky Hale vanishes overnight with all his money, Finn finds himself in hock to a loan shark with a vicious gang of enforcers. Desperate to track down Nicky and repay his debts, Finn investigates her other clients and soon finds himself engulfed in a web of lies, betrayal, malice and madness.