When Publishing or Life Has You Down on the Mat, Answer the Bell by Tiffany Trent

Our guest today, Tiffany Trent, is a true inspiration. You'll love her books, but you'll also love this incredibly inspiring story about her path to publication and the words of advice that all of us, writers and readers alike, should take to heart!

In 2009, I was a guest at Dragon*Con. My first book series was already officially out of print. My seventh book had just gone through its first round of rejections. I had nothing to promote, and was on panels with fabulous authors who had become good friends, as well as authors so famous they almost didn’t seem like real people to me. I was suffering deeply from impostor syndrome. I was also under the illusion that everyone else I met had had a stellar, easy career compared to the travesty of mine.

One of the authors with me on a large panel about writing was Gene Wolfe. He was a legend to me. I didn’t know him personally, and I sat all the way at the end of the row from him because I felt intimidated.

I can’t remember the question from the audience that triggered the story he told, but I imagine it was a thinly-veiled cry for help. Gene told us about how he’d been a boxer in his youth. About how one time, he remembered being down on the mat, so beaten and bloodied he thought he could never get up again. The bell was ringing for his defeat. His coach yelled to him that he had to answer that bell.

He started crying as he told us this story, about how writing was no different. That when you are down on the mat, beaten to death by life, the publishing industry, reviewers, what have you, you must answer that bell.

You must come up swinging and keep fighting for all you’re worth.

Those words echoed and rang within me very much like bells themselves. I was at a standstill. I was down on the mat, beaten and bruised. And it was only my first round, I realized. This man had been through much, much more.

I felt both chagrinned and inspired, thinking about what he must have been through and how he’d triumphed. How he was even now inspiring me and a crowd of other young hopefuls in the audience.

I went on from Dragon*Con to London to research a book I ended up not writing. But what I saw and experienced became excellent fodder for the revision of the novel that had been through its first round of rejections. I worked all through the fall and winter tearing it down to its bones, returning the revised book to my agent by the new year. It finally sold in July 2010 and was published in 2012 by Simon and Schuster Books for Young Readers as THE UNNATURALISTS.

This reads like a straight line path to success, perhaps, but the path was never straight. It remained crooked after publication and continues that way. Not long after I signed the contract for the book, Life threw me a giant curve ball when I ruptured the last disk in my spine. When it first happened, I was paralyzed from the waist down. I spent months in physical therapy, on heavy painkillers, and taking acupuncture. Sitting was agony. Even when the paralysis wore off, I could not walk properly and could not bend over to pick up anything at all, and the nerve damage continued to worsen.

After trying everything to avoid it, I finally underwent surgery the following spring. It was like a grizzly had ripped my spine in half. All of this was going on while I was trying to yet again revise THE UNNATURALISTS to my editor’s specifications. I could not bear the pain of sitting or standing; I literally could not turn over in bed or sit up on my own.

I remember weeping great howling sobs of frustration. I was down on the mat again, in a way I’d never imagined possible.

We rigged up a lap desk that I could use while lying mostly flat with my knees bent so I could see the screen. I did what I could. I stopped when I got tired. I was patient but determined.

I have never thanked Gene for those words. I don’t have them written down anywhere. They are not on a Post-It above my computer. They are not tattooed in some secret place. (Yet). They are emblazoned on my heart.

And when Life, publishing, or whatever it may be throws me down, I might lie there a while. I might even wallow. But I remember those words, the way his voice broke, his tears. I remember that others like Gene have fought and struggled longer and more mightily than me.

They’re still going strong. And so must I. But only if I rise up to the challenge and answer that bell.

Tiffany Trent is the author of the forthcoming young adult steampunk novel THE UNNATURALISTS and the HALLOWMERE series. Her first book, In the
Serpent’s Coils, was named a BookSense (IndieBound) Children’s Pick in Autumn 2007 and a New York Public Library Book of the Teen Age in 2008. She was also the recipient of the 2008 SCBWI Work-in-Progress grant, and has won awards and fellowships for her nonfiction. Her short story “Blackwater Baby” in Magic in the Mirrorstone was given Honorable Mention for the Year’s Best Horror 2008. She is represented by Jennifer Laughran of the Andrea Brown Literary Agency.

Tiffany currently lives in the New River Valley of Virginia. When not writing, she plays with bees, presides over her avian army, and frequently gets lost in the jungle of her garden. 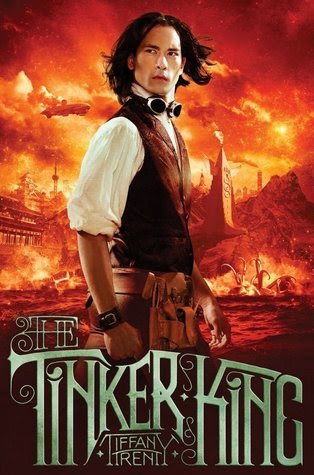 Science and magic mean danger in this sequel to The Unnaturalists, which School Library Journal called “an entertaining mix of steampunk and fantasy.”

After Vespa, Syrus, and Bayne defeated the Grue and restored order to their world in The Unnaturalists, they thought their future was secure. Empress Olivia, committed to peace and equality for humans and Elementals alike, was a fair and just ruler. And the Creeping Waste had vanished, giving them hope for the first time.

But rebellion is brewing in the far-off city of Scientia, and dark Elementals are plotting war in the ruins of New London. Before they know what’s happening, Vespa, Syrus, and their friends are plunged into a new swamp of intrigue, deception and magic—and the cost of survival may be more than any of them are willing to pay.

Author Question: What is your favorite thing about The Tinker King?

My favorite thing about THE TINKER KING is the discovery I made about one of the characters in the process of writing it. It was a discovery that linked the origins of THE UNNATURALISTS and the dark empire of the novels. It was a true lightbulb moment, but I suppose I can’t say much more about it because that would be spoilery.

The other thing (though I suppose this may be somewhat spoilery, too) I loved was getting my characters out of New London and into a new city. Somehow, Scientia was much easier to write than New London. Its history and geography popped into my head almost fully formed. And what wasn’t readily apparent during my brainstorming sessions came easily as I was writing. It was a very fun city to write with its sprawling palace, haunted ruins, and air car transportation system. And I was very curious to see what the Grimgorns had done with the place after they’d taken it over early in the history of the Empire.

The palace ruins were inspired by a trip I took to the Forbidden City in Beijing, as well as my interest in Xian and the terracotta warriors there. As per usual with settings I love, I got a little carried away and ending up writing the plot of an entirely different bit of backstory that would be wonderful to play with someday. Of course for the sake of the novel at hand, I had to rein myself in, but writing all that backstory and knowing that it was beneath the surface of the novel made it that much more fun.